The works of Virgil: Containing his Pastorals, Georgics and Aeneis… by John Dryden (1697) 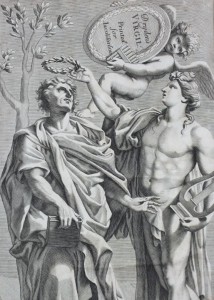 John Dryden’s 1697 translation of The works of Virgil… is a massive folio edition, spanning some 640 pages.  It brings together three of Virgil’s finest works, including the Pastorals, the Georgics and the epic Aeneid.  Profusely illustrated by three of the finest engravers, it is considered to be one of the great publishing projects of its time.

Virgil, or Publius Vergilius Maro, was an ancient Roman poet of the Augustan period.  He was born in October 70 B.C.E. in the farming village of Andes, on the outskirts of Mantova (now Mantua) in northern Italy.  The eldest of three sons, Virgil was thought to have come from a landowning family who could afford to provide him with an education.  He studied in Cremona, Milan and Naples, initially in the fields of rhetoric and law, before turning his attention to philosophy and poetry.  More congenial to his poor health and shy temperament, poetry offered Virgil a means of escape from the world of affairs.

The ten Eclogues, or “Pastorals”, as translated by Dryden, represent Virgil’s first collection of poetry.  Although modelled on the bucolic style popularised by the Greek poet Theocritus, Virgil’s poems are slightly more realistic.  Eclogues’ characters do not live in an idealised version of the countryside; they live in a harsh landscape, where the sun is scorching and the ‘plains burn’.  They live on farms, from which they can be unjustly evicted, and their experiences of poverty, exile and loneliness are very real.  The first poem, “Tityrus and Meliboeus”, reflects upon the days after Julius Caesar’s assassination, when residents of rural, northern Italy were dispossessed to provide land for returned soldiers.  Meliboeus is among the exiles who must leave his land, his goats, his livelihood, and make his way to a new home in Britain, Africa or Scythia.  Scholars have repeatedly drawn parallels between the poem and Virgil’s own experiences but the loss of his family’s farm, and attempts to regain it through poetic petitions, are now recognised as unsupported inferences from interpretations of the Eclogues.[1]

Continuing in the pastoral tradition, and likely spurred on by the success of the Eclogues, Virgil began his next great work, and the second part of The works of Virgil – the Georgics.  Spanning four books, and more than 2,000 lines, the poem was written at the request of Gaius Maecenas, wealthy patron of the arts and political advisor to Octavian (Julius Caesar’s adopted son).  Published around 29 B.C.E., the didactic poem which celebrates the power and beauty of nature, and the importance of living in harmony with it, took seven years to complete.  Filled with practical farming advice and instructions for ploughing, growing trees and keeping livestock and bees, the Georgics was in many ways a “superb plea for the restoration of the traditional agricultural life of Italy.”[2]  Virgil wanted its readers to see his beloved version of Italy, a view shared by the government at the time, which was keen to resettle the land. 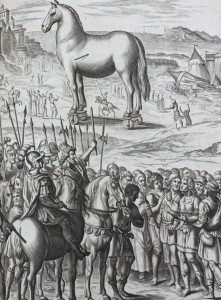 The Aeneid, or Aeneis, as translated by Dryden, forms the third part of The Works of Virgil, and is arguably the poet’s finest piece.  Comprising some 12 books, the Aeneid is a dactylic hexameter, or rhythmic, poem, similar in construction to Homer’s Iliad or Ovid’s Metamorphoses.  Considered by many to be a literary masterpiece, the Aeneid became Rome’s national epic, and its progress was keenly followed during the eleven years that Virgil worked on it.  The Aeneid embodies Virgil’s ideal Rome; it tells the mythical story of the founding of Italy’s capital city through the journey of Aeneas and his fellow Trojans as they flee Troy in search of a new home – one that will become the Great Roman Empire.  It begins part way through Aeneas’ journey as he nears the city of Carthage, where he recounts, to its Queen, Dido, the story of the fall of Troy.  He describes how the Trojans were tricked by the Greek’s giant wooden horse filled with soldiers; the plague that forced them to leave Crete; their fight against the half-woman, half-bird Harpies, as well as their escape from the one-eyed cyclops and the death of his father, Anchises.  Upon hearing his story Dido falls in love with Aeneas.  He is keen, however, to continue his journey and his departure prompts Dido to kill herself with his sword.  Unaware of the tragedy and aided by a prophecy, Aeneas eventually finds his way to Laurentum.  Here, he will build the Great City and marry the King’s daughter, Lavinia, but not before a deadly duel with another suitor, Turnus.

At the time of writing the Aeneid, Virgil was already a national figure and a very rich man.  The Aeneid proved to be another great success, however Virgil would not see its results.  In 19 B.C.E., before the poem had received its final revision, Virgil travelled to Greece, possibly to obtain local colour for the parts of Aeneid set in Greek waters.[3]  During the trip he caught a fever and, weakened with disease, died soon after his arrival in Brundisium habor on 21 September 19 B.C.E.  According to legend, Virgil had intended to spend another three years on the poem, and before his death reportedly ordered his literary executors to destroy the unfinished manuscript.  That order was revoked by the Roman Emperor, Augustus, and the Aeneid was published with a few editorial changes, leaving readers to ponder those changes and any faults which Virgil may have planned to correct.

Since their publication, Virgil’s works have revolutionised Latin poetry.  They became standards in Roman school curricula, and poets following Virgil, such as Ovid, often referred to them to generate meaning in their own poetry.  More recently, his influence can be seen in the works of English poets Edmund Spenser, Alexander Pope and John Milton, who also progressed from pastorals to similarly ambitious epics.  Northamptonshire poet, John Dryden, was particularly inspired by Virgil, and his 1697 translation of the Aeneid was arguably the best ever produced in English.  Published by subscription to great fanfare, it earned Dryden approximately £1,400, a massive sum of money in the 17th century.  His translation was not without its critics though.  Some believed that he had expanded the passages unnecessarily, and certainly Dryden, by his own admission, did not see his role as one of literal translator. Some words he omitted; occasionally he added his own.  Nonetheless, it seems Dryden never intended for readers to see the words as his own, rather words which reflected Virgil’s intent, possibly even his secret intent.  This departure from the literal Latin actually gave his work a vitality, a sort of smoothness which has seen it remain the finest translation, without rival, to this day. 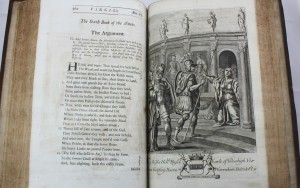 The works of Virgil (1697) was funded in part by publisher Jacob Tonson, although the majority of Dryden’s income came from the subscribers who each paid 5 guineas towards the project.  In return they received a full-page illustration dedicated to them and engraved with their names and coat of arms.  Part way through the translation, a second subscription list was created; these subscribers paid only one guinea as down-payment and a further guinea upon delivery of the book.  They received the same work but its plates were not dedicated to them.  The names of both sets of subscribers can be found in the lists after the preface to the Pastorals.

The Library’s copy of The works of Virgil is the first addition with 101 stunning illustrated plates, each dedicated to a subscriber and produced by the finest European engravers – Michael van der Gucht, Wenceslaus Hollar and Pierre Lombart. It is available for viewing in Rare Books & Special Collections at SR 87 V5.D 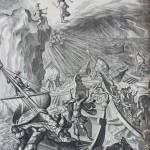 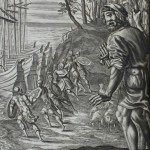 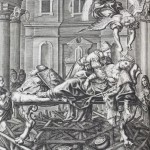 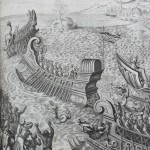 “The seamen stretch their oars”. Book 5 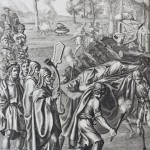 “With groans and cries Misenus they deplore”. Book 6 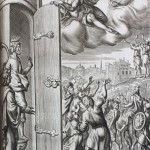 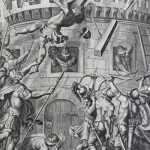 “The troops of Turnus to the combat fly”. Book 9 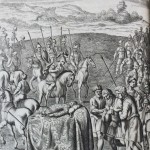