The herball, or Generall historie of plantes. Gathered by John Gerarde…; Very much enlarged and amended by T. Johnson. 1636 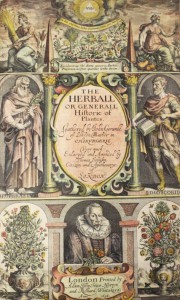 A massive tome of some 1630 pages, The herball, or Generall historie of plantes was first published in 1597. Essentially, a gigantic plant catalogue, it documented more than 1,000 species, many accompanied by hand-coloured illustrations. It brought John Gerard instant fame and remained highly esteemed for the next 200 years. Generally considered to be the best and most exhaustive work of its kind, it continued to be used as a standard reference well into the 18th century.

Gerard was born at Nantwich, Cheshire, in 1545 and received his only schooling at the nearby village of Willaston. Little is known of his parentage or his early education except that he was apprenticed at seventeen to barber-surgeon, Alexander Mason, in 1562. Although granted permission to establish his own practice, Gerard became interested in plants whilst studying in London. He divided his time between the gardens of Lord Burghley’s Cecil House at Hertfordshire, of which he was superintendent, and the Physic Garden at the College of Physicians, of which he was curator. He soon became popular and was presented with rare plants and seeds from around the world, and received offers to supervise the gardens of noblemen.

The herball, or Generall historie of plantes, arguably the most famous of all English herbals, was Gerard’s second published work. It described more than 1,000 plant species in more than 800 chapters and contained approximately 1,800 hand-coloured woodcuts. It documented the common and botanical names of the plants, their habitats, time of flowering and their various uses. It also included anecdotes on the folklore surrounding the plants. It was reprinted in 1633 and again in 1636, by which time it included more than 2,500 illustrative woodcuts. 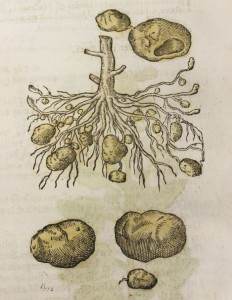 Although immensely popular, The herball was steeped in controversy, and was considered by some to be a translation of another’s work. A member of the London College of Physicians, by the name of Robert Priest, had been commissioned to translate Rembert Dodoens’ 1583 Latin herbal Stirpium historiae pemptades sex into English. Before the book could be published Priest died and the Queen’s Printer, John Norton, asked Gerard to complete the project. In fact Gerard claimed almost sole credit for the work, stating in the book’s preface that upon Priest’s death “his translation likewise perished” and that “the first fruits of these mine own labours”. Gerard reportedly changed how the plants were arranged, ordering them according to Mathias Lobel’s 1570 Stirpium Adversaria Nova, and took the majority of the woodcuts from Jacobus Theodorus’ 1590 Eicones Plantarum, which themselves had been reproduced from earlier herbalists. Accusations of plagiarism, coupled with Gerard’s lack of scientific training and resulting incorrect, even mythical, plant descriptions, led publisher, John Norton, to hire Lobel to proof The herball translations. Although Lobel claimed to have found more than 1,000 mistakes, Gerard grew increasingly frustrated, dismissing Lobel and forging ahead with what was a less than reliable publication.

Errors that appear in The herball include the description of the white potato which Gerard mistakenly believed to be native to America, calling it the “Virginian Potato” to distinguish it from the red sweet potato. He was also responsible for the “Goose-barnacle legend”, reporting in the book that the Barnacle goose essentially began its life by growing from a tree rather than an egg – a conclusion he reached after obtaining specimens of muscle-like shells from an old, rotten tree which showed evidence of feathers and soft down. 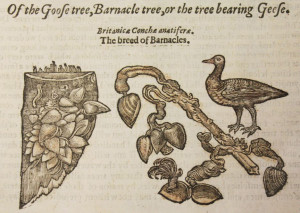 The Library’s 1636 edition of The herball is the third printing which includes many corrections and new information based on empirical observation. Its editor, botanist and apothecary Thomas Johnson, added a further 800 new species and 700 illustrations. This revised edition reached a wider audience and was still being used in botany classes as late as the end of the 18th century. Despite the obvious shortcomings in Gerard’s earlier efforts, he laid the foundation for an impressive catalogue of plants which would set the trend for others to follow and which, today, allows gardeners to trace not only where plants originated from but when they arrived in Britain.

In 2012 The herball underwent conservation treatment. It was the test case that paved the way for what would become the Friends of the Library’s Adopt-a-Book program. The herball’s condition report outlines the repair work performed and also provides some fascinating photographs taken before, during and after the restoration process.

The herball, or Generall historie of plantes is available for viewing in Rare Books & Special Collections at SR/E 580.2 G356