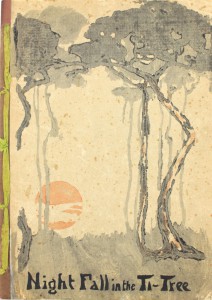 It’s easy to fall for the charms of this little book. It has been described as timeless, a ‘tour de force’, a remarkable achievement, and “an original and significant contribution to twentieth-century Australian art and print culture.”[1]

It also occupies a monumental place in Australian publishing history, being the first example of coloured woodblock printing in Australia and is also held to be the first Australian artist book. 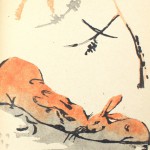 Violet Teague and Geraldine Rede were friends who lived for part of their life at Mt Eliza in the Victoria bushland, and they took inspiration from the small animals, frogs, bats and crickets and ti-trees familiar to them. Only 32 pages long with 16 woodcut illustrations, Night Fall in the Ti-Tree tells the story in haiku-style text of the simple life of bushland rabbits.

It has also been listed as a children’s book, despite describing the terrible fate awaiting the bunnies in traps set by hunters, from which God would save them by giving them large ears and bright eyes. 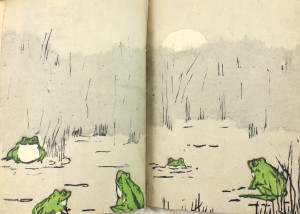 You step out unwitting,
Bright moon inviting –
Ah! What a spring when
You taste its fierce biting:
Steel chain affrighting.

You scream in your anguish,
A mute thing by kind!
You make but the search easy
When Death comes to find,
O easily find! 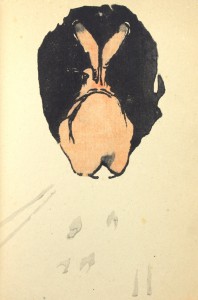 Influenced by Japanese printmaking, it was a collaborative production by two close friends who counted amongst our first professional women artists. It won an award at the landmark first Australian Exhibition of Women’s Work in Melbourne in 1907.

The artists illustrated, designed, printed and hand-bound the book in Teague’s Collins St studio in Melbourne, producing over 2,000 prints before the first edition was ‘published.’ They experimented with techniques for almost a year, often working 12 hours a day. Using hand-made tools, the woodblocks were cut along the grain in the Japanese style to give gradations in tone. Water-based inks were then brushed directly onto the blocks employing several layers of colour for each image. Some of the designs extended beyond the edge of the page while others covered a double page spread, compounding the difficult process of registration. The paper, recycled from sugar bags to simulate Japanese mulberry paper, was left uncut and folded and sewn with green silk ribbon.

Violet Teague (1872-1951) was born and educated in Melbourne, but in the 1890s toured the art galleries of Europe and studied in the Brussels studio of Ernst Blanc Garin and then in England with Sir Hubert von Herkomer. She probably became familiar with Japanese techniques during this period, but practiced in various mediums. Her portrait of Geraldine’s father, Colonel Rede, was hung at the Salon de la Société des Artistes Français in Paris. On her return to Australia at the age of 25 she joined the National Gallery School in Melbourne, and in 1902 was appointed to the Council of the Victorian Artists’ Society.

Teague produced many Japanese style woodcuts and wrote articles and presented demonstrations on the technique. During WWI, she turned to fundraising and printed a selection of prints from Nightfall in the Ti-Tree which sold at ten shillings and six pence each to raise money for the Red Cross.

A vital and adventurous personality, in 1933 Violet and her sister Una travelled by car across the outback to visit Hermannsburg. The Mission had experienced a devastating drought which resulted in the death of almost a third of the Aboriginal population. The sisters raised more than £2,000 towards a pipeline to transport water from the Kaporilya underground springs to the Mission. She also befriended Albert Namatjira who named one of his children after her. This was a year before Namatjira’s famed meeting with Rex Battarbee.

Teague’s portraits have been counted among Australia’s best, and later in life she turned to painting altarpieces. She was one of Australia’s most internationally renowned artists of the time, although largely unrecognised in more recent years.

Less is known of the life and career of Geraldine Rede (1874-1943). Her smaller body of work included The White Feather, a portrait of a young Miles Franklin painted around 1900. She also studied at the National Gallery School, probably from 1897 to 99, and both Teague and Rede studied painting under Emanuel Phillips Fox and participated in the Charterisville Summer School of 1899.

Teague and Rede also collaborated with their friend Ina Gregory on the illustrations for Birds of the Sunny South with Australian Flowers published in 1911. 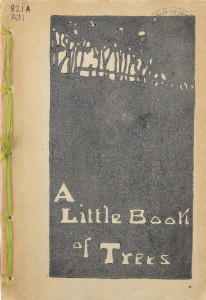 Rede published a second artist’s book of woodcut illustrations under the Sign of the Rabbit imprint in 1909 from her own Collin’s St studio. Titled A Little Book of Trees, it is the only other Australian book known to have utilised Japonisme techniques. Accompanied by short verses by Rede, this work has not achieved the same acclaim as Nightfall in the Ti-Tree.

Both artists represented a new class emerging in the 1890s: professionally trained, largely unmarried women who could pursue a career based on their intellectual interests, and who pursued art as a paid profession rather than as a leisure pursuit.

Very few copies of this first edition of Night Fall in the Ti-Tree were printed (only 500 copies in two issues) although it was widely exhibited in Australia. In 1906, it was reprinted by English publisher Elkin Mathews as a second edition which the National Gallery of Australia produced in facsimile in 1988. 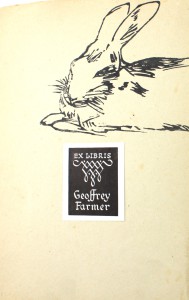 Louise Poland, in her excellent article “The Art of Publishing: Violet Teague, Geraldine Rede & the Sign of the Rabbit (1905-09),” identified only 13 extant copies of the first edition with an imprint date of 13 July 1905. Through examination of the signed initials on the prints she determined that the front cover and another four images were produced by Rede, while 11 images, mostly of rabbits, and the endpapers and back cover were by Teague. In The University of Adelaide Library copy however, the images are unsigned, perhaps because it was given to family rather than sold (it bears the signature of an unidentified member of the Rede family.)

Our copy also bears the bookplate of Geoffrey Farmer, the bibliographer of Australian private presses.

Night Fall in the Ti-Tree is a unique production by two innovative artists. It is a difficult work to categorise, resting uneasily between a private press and an artistic production. Each copy is in turn unique, and compared with the State Library of Victoria’s digitised copy our copy differs markedly in tone and colour. 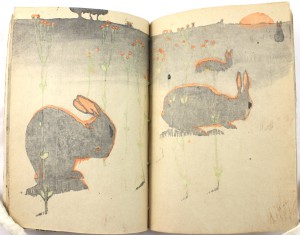 “The Rabbits have nibbled Sweet grass on the furrow…” 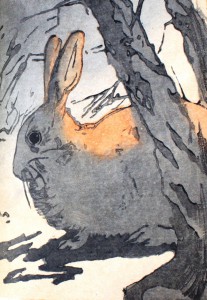 “Such long ears to hearken? Such bright eyes to wake?”

Louise Poland. ‘The Art of Publishing: Violet Teague, Geraldine Rede & the Sign of the Rabbit (1905-09).’ Bulletin of the Bibliographical Society of Australia and New Zealand 28: 4 (2004), p. 49-70. Poland’s excellent article is the source for much of the information in this article.