The water-babies: A fairy tale for a land-baby. Charles Kingsley (1885) 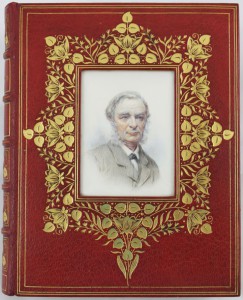 Written for his son Grenville and published on a monthly basis in MacMillan’s Magazine between August 1862 and March 1863, Charles Kingsley’s The water-babies… is one of the most unusual children’s fables.  Intended as a satire in support of Charles Darwin’s On the origin of species, it delves into some of the naturalist’s preoccupations at the time and, in many ways, is a response to Victorian attitudes, particularly in regard to child labour and religion. 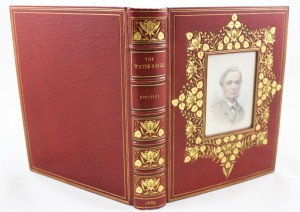 The story centres around Tom, a young chimney sweep employed by the cruel Mr Grimes, who falls down a chimney whilst working in a posh home.  He finds himself in Ellie’s bedroom, where he’s puzzled by a washing stand, soap, brushes, towels and a bath filled with clean water.  A looking-glass confirms Tom’s dirty appearance before he’s chased out of the house by its occupants.  A desire to be clean, leads Tom towards a stream where, once under water, he is transformed into a water-baby.  A series of adventures and moral lessons ensue, with Tom crossing the paths of numerous water-creatures along the way.  Spiritual leaders such as Mrs Doasyouwouldbedoneby, Mrs Bedonebyasyoudid and Mother Carey also play an important role in his moral education, which culminates in a journey to the “other-end-of-nowhere” to help Grimes, who has himself become a chimney sweep.  Upon helping someone he doesn’t like, and learning many other lessons, Tom is allowed to return home with Ellie on Sundays and to become a great man of science.[1] 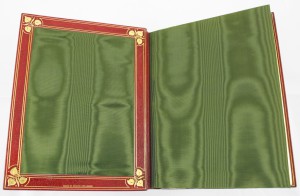 The book has both political and religious overtones.  Not only was it a serious critique of the closed-minded approaches of many scientists of the day, it was actually written in support of Darwin’s theory of evolution, with which Kingsley had no trouble reconciling his own faith.  In fact, Kingsley and Darwin became good friends, the former issued with a review copy of The origin of species before it had even gone to print.  Parallels between their works can also been drawn, with Kingsley emphasising in The water-babies that nobody had the authority to say that something did not exist simply because they had never seen it.  Through the book’s characters, Kingsley also exposed and criticised the Victorians’ attitudes to child labour; some have even credited his novel with easing the passage of the 1864 Chimney Sweeper’s Act, which prohibited the use of minors in the trade.  In more recent times, however, The water-babies has lost favour with many who cannot accept Kingsley’s rather dismissive, even insulting, references to different ethnic and racial groups, particularly the Americans, and Irish and Jewish people.  Although the book should be considered in context, the author merely expressing prejudices common at the time, many later editions have been edited or abridged to maintain popularity. 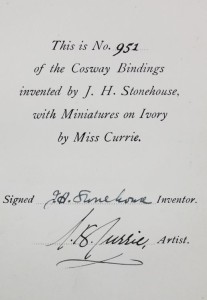 Though significant as a children’s classic, this is not the reason for the Library’s acquisition of the 1885 edition.  In many ways the holy-grail of bindings, this book exhibits one of the finest covers of all of the books held in Rare Books & Special Collections.  This edition is presented in a magnificent ‘Cosway’ binding by Rivière & Son in a red crushed Levant (goatskin).  Its cover, with a gilt triple fillet border, inner double fillet border and floral ornamentation, is set with a miniature portrait under bevelled glass.  The portrait, depicting the author Charles Kingsley, is painted by Miss C. B. Currie on ivory.  In addition, the book features raised bands, gold-decorated spine compartments, fillet-tooled board edges, ruled turn-ins (stamped ‘Bound by Rivière & Son’) and watered-silk doublures, the rear of which is also stamped ‘Miniatures by C. B. Currie’.  An inserted certificate leaf has also been signed by J. H. Stonehouse and Currie and reads: ‘This is No. 951 of the Cosway Bindings invented by J. H. Stonehouse, with Miniatures on Ivory by Miss Currie.’ 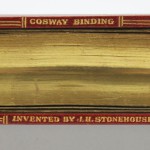 Always a traditional leather binding, the ‘Cosway’ is named after Richard Cosway (c1742-1821), the acclaimed English miniaturist.  He painted various English and French aristocrats and many members of the British Royal family, and much of his work can still be seen in Windsor Castle.  An early 20th century creation though, the Cosway binding didn’t actually have anything to do with Richard.  The earliest designs were in fact the work of Miss C. B. Currie whose services were employed by the bookselling firm of Henry Sotheran, the manager of which was J. Harrison Stonehouse.  Her paintings were almost always on ivory.  Often one large painting was set into the cover; occasionally multiple graced the front cover.  In 1911, a particularly lavish example appeared in Sotheran’s catalogue which had 21 miniatures inset into the front cover.

Importantly, all of the early bindings are by Rivière and the paintings the work of Miss Currie.  Over the years, numerous attempts have been made to reproduce the Cosway bindings.  These Cosway-style bindings, however, lack the quality of the early pieces and collectors should be wary of the less expensive designs.  If it seems too good to be true, it probably is…

The water-babies is available for viewing in Rare Books & Special Collections at SR 823 K55w. 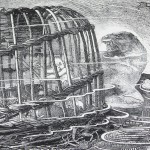 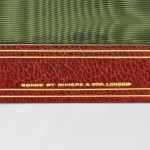 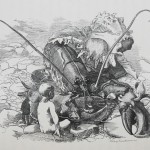 ‘Things you may not know about The Water Babies’, Interesting literature: A library of literary interestingness, 9 October 2013, accessed online 1 August 2017.
https://interestingliterature.com/2013/10/09/things-you-may-not-know-about-the-water-babies/