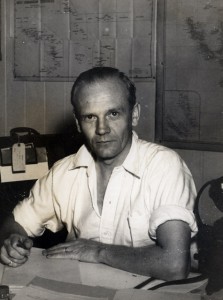 For the last 18 months we have been undergoing a project to digitise the personal and research papers of Harry and Honor Maude. Henry (Harry) Evans Maude (1906-2006) was a civil servant and anthropologist who spent eighteen years working in the Pacific Islands. Between 1929 and 1948 Maude served as District Officer, Native Title Lands Commissioner and Resident Commissioner to the remote Gilbert and Ellice Islands colony (now Kiribati and Tuvalu), a widespread collection of coral atolls incorporating the Gilbert and Ellice Islands group, the Phoenix Islands group and also Fanning, Washington, Christmas and Ocean Islands. He was awarded the Order of the British Empire in 1939 for his services in the Colony, particularly in relation to his Phoenix Islands resettlement scheme. Recognising the complexities of island life and the process of cultural change, Maude began to research island history, collecting an extensive array of source materials along the way. Harry’s wife, Honor, accompanied Harry to the islands, aiding him with his research, as well as conducting research of her own, becoming a world-renowned expert on String Figures.

The papers include letters, publications and official reports from their time on the Islands, as well as written notes on pacific history, culture, genealogy and language. The goal of the project is to make the contents more accessible to both researchers and people living on the islands wanting to connect with their history. So far approximately half of the contents of the papers have been scanned and are available freely online on our Digital Archive. The digitisation was made possible thanks to a generous donation.

Using the digitised files, we have been creating a timeline and map of their work on the islands using the Story Map platform, created by Arcgis. The Story Map follows Harry and Honor around the islands, featuring maps of their locations and accompanied by a narrative of their work and research, put together from information taken out of their letters home.

The first stage of this project is now complete, covering their early lives and careers up until 1935. Check out the Life of Harry Evans Maude story map online at http://arcg.is/2vArJfQ. The project is ongoing with the Story Map being continuously edited and updated. 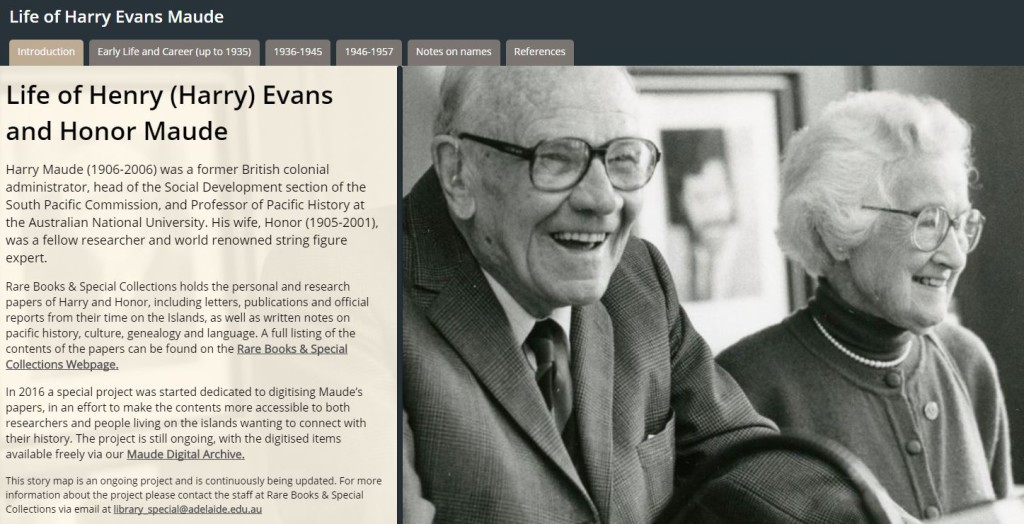 Thoughts or comments on the project? Please contact us via email at library_special@adelaide.edu.au or message us on our Facebook page