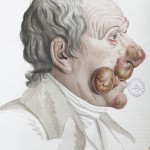 [Description of skin diseases: Observed at Saint-Louis Hospital: and exposure of the best methods followed for their treatment by J. L. Alibert]

A massive tome of some 51 x 40 cm with 55 colour plates, Description des maladies de la peau… is Jean-Louis Marc Alibert’s masterpiece on diseases of the skin.  Originally published in 1806, the dermatology work proved so popular that later editions were produced in 1814 and 1825.

Jean Louis Marc Alibert was born in 1768 in Villefranche de Rouergue in the south-west of France.  His education began at a religious institute run by the Fathers of Christian Doctrine, and by the age of eighteen he had decided upon a career in the priesthood.  Secularization in 1792, however, forced Alibert to abandon his vocation.  Instead, he taught in a local school until a trip to Paris in 1795 saw him enrol in Ecole Normale (Paris Normal School).  It would not be long, though, before Alibert had to abandon his studies again, when the school was closed by local authorities; he had been there for just four months.  Alibert suddenly found himself in a state of indecision.  So, when a local patron introduced him to physiologist Pierre-Jean-Georges Cabanis, he was open to Cabanis’ encouragement to study medicine.   He enrolled at the University of Paris and studied under distinguished professors and physicians such as Philippe Pinel, the founder of modern cardiology.  In 1799 he presented his thesis on pernicious and ataxic intermittent fevers, dedicating it to Pinel who had influenced his interest in nosology, the branch of medical science concerned with disease classification. 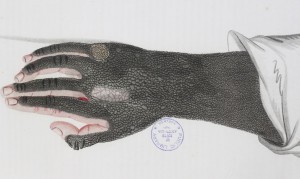 In c1801 Alibert was appointed Adjunct Physician in the Saint-Louis Hospital in Paris, where patients suffering from a range of chronic diseases were treated.  The hospital was overcrowded when Alibert arrived so he immediately began to limit admission to patients with diseases of the skin.  At this time dermatology as a discipline was non-existent; diseases of the head were called ‘tinea’ and inflammations of the body simply named ‘tetter’.  Alibert resolved to teach and delivered many lectures on dermatology.  At first, he made use of a small amphitheatre in the Pavillon Gabriel.  Attendance was great and the audience soon outgrew the venue, so he moved his talks outdoors.  He hung paintings of skin disorders from the trees, and Sisters demonstrating diseased patients wore placards indicating the diagnosis.  He was also known to stop patients on the streets, transporting them to the hospital in his own carriage where they would act as subjects for his lectures.  Once, to emphasise a point, he even scattered over his audience some scales from a patient with pemphigus foleacious, an autoimmune skin disorder that resulted in superficial blisters.

Through his conduct at the hospital, Alibert acquired considerable fame; he was even appointed personal physician to the King in 1815.  Louis XVIII suffered from numerous ailments and Alibert increasingly found himself tending to the sickly Monarch.  As the King’s health declined, so too did the frequency of Alibert’s visits to the Saint-Louis Hospital, and finally he was forced to relinquish supervision of the dermatology service altogether.  When the King died in 1824 Alibert was reaffirmed as the royal physician and was made a baron in 1828 for his treatment of eczema on Louis XVIII.  Alibert’s contribution to dermatology during the course of his career was significant.  He coined numerous terms – syphilid, dermatosis, keloid and dermatolysis – all in common use today.  He was the first to describe mycosis fungoides, the most common form of cutaneous T-cell lymphoma, and the first to distinguish between luetic and scrofulous ulcers.  The long-pursued cause of scabies was also demonstrated on Alibert’s service in 1834. 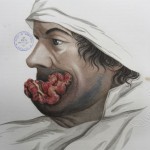 Despite his passion for public speaking, Alibert still sought a broader audience for his observations and recorded much of his life’s work in his 1806 masterpiece, Description des Maladies de la Peau… In it, Alibert employed a system of disease classification similar to the one developed for his 1800 thesis, Traité des fièvres pernicieuses intermittentes.  That system, ‘Nosologie Naturelle’, had its basis in botanical analogies of dermatology; it was graceful in manner, perhaps a little too so, for it was eventually deemed fanciful and confusing.  Skin eruptions were referred to as ‘eflourescences’ and diseases were described as ‘lichens’ and ‘mycoses’.  Alibert even proffered that the bark of the tree trunk represented the epidermis and dermis and that the branches were groups of diseases.  These diseases included syphilis, scrofula, psoriasis, icthyosis, herpes, eczema and tinea, and they were masterfully depicted in the original printing via some 56 stipple-engraved colour plates. 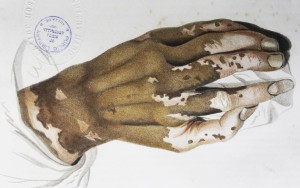 This stipple engraving technique was essentially a mixture of etching and engraving.  It cleverly created tone in an illustration through the use of tiny dots or flecks, distributed in patterns of various sizes and densities over the image.  The work was created by the artist on a metal, (usually copper) plate which was first covered with an acid-resistant etching ground.  Taking to the plate with a burin, a cutting tool with a wooden, mushroom-shaped handle and pointed steel shaft, the artist etched or gouged out the dots, making stipples or small holes, in the etching ground.  The image would appear as acid was applied over the punctured ground where it would bite the plate at each stipple or hole.  The etching ground was then removed and the tonality of the image would emerge as the acid bit through areas of varying dot concentration.  The darker the image, the closer the pattern of dots.  Though some stipple effects were thought to originate as early as the 16th century, the method became most popular in the late 18th century, when printmakers such as Francesco Bartolozzi began to use colour in the engravings.  At the time, most printing processes required the use of separate plates for each colour but in stipple engraving the colours could be carefully applied with a brush to a single plate for each impression. 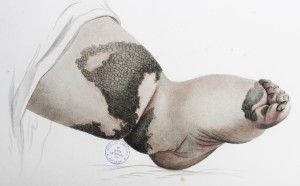 When it came to the illustrations in Descriptions des maladies… Alibert prided himself on the fact that he had employed the finest artists to prepare the colour plates.  The work was in fact the largest and most spectacular of the early dermatology classics and the first on the subject in a French book.  The illustrations were superbly executed and the volume came, accordingly, at a hefty price – 600 francs.  Alibert actually spent his wife’s dowry of 100,000 francs on its production and subsequently had to repay it all when she died just eight months after their marriage.

The Library’s copy of Description des maladies de la peau… is the 1825 edition.  Though it also includes magnificent colour plates, these are likely reproduced chromolithographically with some additional hand-coloured highlights.  To view this magnificent volume, visit Rare Books & Special Collections where it can be found in the Oversize Collection at RB/E  616.5 A39 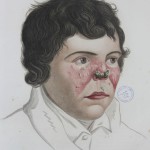 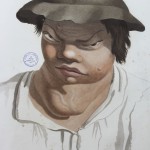 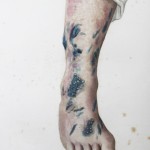 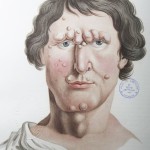 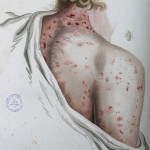 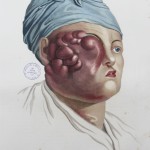