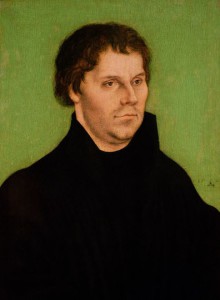 On 31 October 1517 the German Augustinian monk, Martin Luther, attached his 95 theses to the door of the Castle Church in Wittenberg. Luther’s objections to church doctrine and practices, relating especially to the sale of indulgences, sparked the Protestant Reformation and instigated social and political change on a global scale.

Luther’s belief that Scripture alone is the sole authority for Christian belief and practice, and therefore that salvation is dependent on faith alone because of Christ’s sacrifice, emphasised the value of the word of God and the need for the word to be available to people in their own language.

Luther’s reforms spread rapidly through Europe, and also influenced the colonisation of South Australia and its German immigrants. The recording of Aboriginal languages by German missionaries in order to spread the word of God through the vernacular acted to keep languages alive and establish new traditions of Aboriginal song.

This exhibition will explore the importance of the word, its transmission through the new technology of printing, and its interpretation through images and song.

On display in the Rare Books & Special Collections foyer from the 16th October – 29th October 2017 during Library opening hours and then in the Barr Smith Library Reading Room (level 2) from the 30th October – 30 November 2017.

This entry was posted in Exhibitions. Bookmark the permalink.