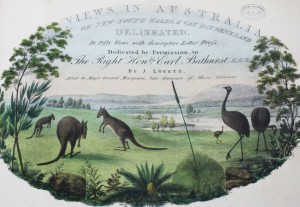 Dedicated to The Right Honourable Earl Bathurst, His Majesty’s Principal Secretary of State for the Colonial Department, Views in Australia… was Lycett’s first attempt to give the British public an impression of the grandeur and beauty of Australia.  With a particular focus on New South Wales and Van Diemen’s Land, it comprised fifty stunning colour plates, each one, according to the book’s advertisement, an absolute facsimile of the scenes and places visited and drawn by Lycett.

Joseph Lycett was born c1774 in Staffordshire, England.  Although he worked as a professional portrait painter and miniaturist, he was convicted in 1811 of forgery and transported to Australia for a term of 14 years.  He arrived in Sydney in 1814 where, somewhat ironically, he was employed as a clerk in the police office.  Just 15 months into the job, Lycett was again convicted of forgery, when the office was flooded with skilfully forged 5-shilling bills.  They were traced back to Lycett, who had in his possession a small copper-plate press.  He was sent to the penal colony of Newcastle where his work as a legitimate artist attracted the attention of Commandant James Wallis, who had captained the ‘General Hewitt’, upon which Lycett had originally sailed to Australia.  At Wallis’ request, Lycett drew up the plans for a church which was built in 1818. He then painted the altar piece and likely also the window which still survives in the bishop’s vestry of Newcastle Cathedral.  On Wallis’ recommendation, Lycett received a conditional pardon.  An absolute pardon followed in 1821, possibly a reward for three of his drawings that Governor Lachlan Macquarie sent to Lord Bathurst, Secretary of State for the Colonies, in England. 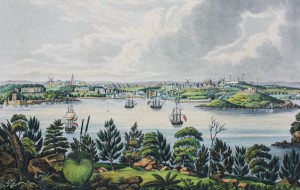 In 1822 Lycett departed for England where he set about producing a book of Australian landscapes.  Two years later, the London publisher, John Souter, issued the first of Lycett’s Views in Australia.  There were to be twelve monthly parts, each with two aquatint views of New South Wales and two of Tasmania with descriptive letterpress.[1]  There was also a supplement which contained maps of both colonies.  The coloured parts to the series were sold for 10 shillings, 6 pence, whilst the uncoloured parts were sold for 7 shillings.  Although the first six plates were lithographs, Lycett and his London publisher soon realised that aquatint would be better and they were re-issued as such with later plates produced in the same medium.  When all of the parts were completed they were bound together and sold as Views in Australia (1824-25).

Though he spent eight years in Australia, just how widely Lycett travelled is debateable; it’s possible he didn’t even make it to Tasmania.  In her 1992 biography, Jeanette Hoorn suggests that Lycett based much of the Views’ text on W. C. Wentworth’s 1819 Statistical, historical, and political description of the colony of New South Wales and its dependent settlements in Van Diemen’s Land [2].  Its pictures also appear to rely heavily upon the works of others, the Tasmanian plates corresponding to the places that Governor Macquarie visited in his 1821 trip with explorer and artist George William Evans.  Certainly, the watercolours that he completed whilst in the colony had a more realistic style, closely resembling those of his fellows.  Landscapes that he added back in England, however, had a much more romantic feel.   In many ways, they failed to truly capture the character of the Australian landscape, assuming what, at the time, was a more acceptable English parkland look.  Nevertheless, his works were elegant and had a certain charm that appealed to contemporary taste. 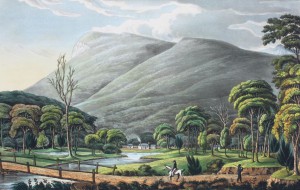 The majority of the plates in Views in Australia are landscapes, with a number of them depicting colonial settlements too.  Country estates also feature regularly, along with important landmarks such as Government House.  Some of the most impressive illustrations include the township of Sydney, which Lycett describes as being “built on the extremity of a cove” and which he considered to be “one of the safest in the world’; the view of Botany Bay as taken from the south side of Cook’s River; the township of Parramatta, the south end of which he described as a “delightful spot” which was originally called Rose Hill; the “wild, yet grand” River Wingee Carribbee; the view of Hobart Town; the “magnificent” Mount Wellington; and Cape Pillar, a promontory which was considered “an excellent sea-mark for ships sailing to this remote part of the world”.  He went on to describe its peculiar shape which could scarcely be mistaken, for there was “no other object in any respect similar to it” and how it acquired its name because the rock beared a resemblance to the pillars of a gothic cathedral. 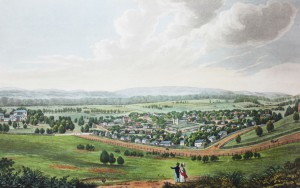 Rare Books & Special Collections is fortunate to hold two copies of Views in Australia.  One was bequeathed to the library by Sir Samuel Way in December 1925, the other by Christine Margaret Macgregor in May 1974.  Although bound differently, both begin with a dedication to Lord Bathurst, followed by Lycett’s “Advertisement” on the purpose and format of the book, and finally his 15-page account of “the discovery, foundation and present state of the colonies”.  Here, he discusses their climate, seasons, soil fertility, population and animal and vegetable production.  Both copies contain 25 colour plates of New South Wales and 25 colour plates of Van Diemen’s Land.

Views in Australia is available for viewing in Rare Books & Special Collections at SR/E 919.4 L98 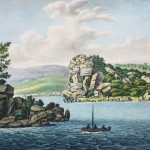 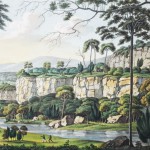 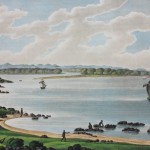 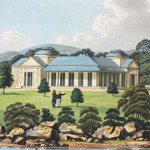 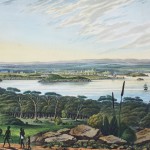 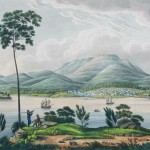 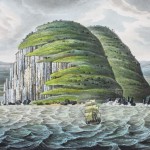 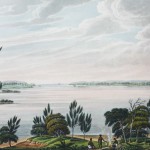 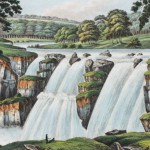