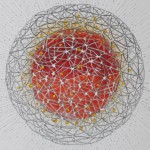 Published in 1862, Die Radiolarien is Ernst Haeckel’s large two-volume monograph dedicated to the study of radiolaria, the single-celled aquatic animals or protozoa with their spherical, amoeba-like bodies and radiating, elaborate, spiny skeletons of silica. 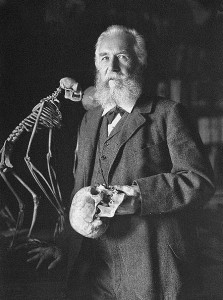 Ernst Heinrich Philipp August Haeckel was born in Potsdam, Prussia in 1834.  Though chiefly known as a zoologist and evolutionist, he was also a philosopher, physician, naturalist and artist.  He grew up in Merseburg, where he attended the ‘domgymnasium’ before studying medicine in Würzburg and at the University of Berlin.  He obtained his degree in 1857 but an interest in marine biology persisted, encouraged by his University professor, Johannes Müller, who had taken him on summer expedition to the North Sea.  He was fascinated by the small sea creatures he had observed there and, when his father granted him permission to travel further, he seized the opportunity to study the protozoan group ‘Radiolaria’ whilst in Messina, Italy.

On his return, Haeckel completed his doctorate in zoology at the University of Jena, and in 1862 was appointed Associate Professor of Zoology there.  That year, he published Die Radiolarien.  It not only impressed Charles Darwin but was also awarded the Cothenius gold medal of the Leopold-Caroline Academy of German Naturalists[1].  By 1865 Haeckel had been appointed full professor and he remained at the University for 47 years until 1909, lecturing and working on radiolaria, poriferans (sponges) and annelids (worms such as earthworms and leeches). 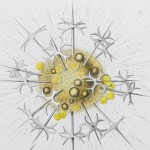 Despite his credentials, Haeckel’s theories and ideas were often called into question; many of them were later found to be incorrect.  Although he was a champion of Darwin’s work, he also embraced the pre-Darwinian notion that life formed a series of successively higher forms, with embryos of higher forms “recapitulating” the lower ones.[2]  Over the course of time, he felt that evolution simply added new stages to produce new life forms and therefore embryonic development was actually a record of evolutionary history.[3]  The single cell corresponded to amoeba-like ancestors, eventually developing into a sea creature.  Haeckel actually named this process the ‘Biogenetic Law’ and often expressed the theory using the phrase “Ontogeny recapitulates phylogeny”. 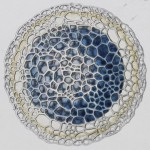 Haeckel was so convinced by this theory of recapitulation that he regularly tampered with evidence to support it.  In reality, the development of embryos did not fit into the strict progression that Haeckel claimed.  In fact, he came under fire for his embryo comparison depicted in the fifth edition of Anthropogenie… (1903) in which he deceptively omitted the limb buds of an echidna at an early stage of development.  This deception made his vertebrate embryos look more alike than they actually did in real life.[4]  By the early 1900s scientists had discovered many more cases that defied Haeckel’s Biogenetic Law and although some followers tried to cast them as exceptions that proved the rule, it was soon evident that the course of evolution was far more intricate that Haeckel claimed.  Genes were discovered to control the rate and direction of embryonic development, with individual genes capable of mutating to cause different changes to the way in which embryos grew — either adding new stages at any point along their path, or taking them away, speeding up development or slowing it down.[5] 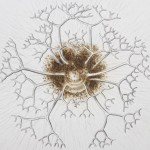 Nevertheless, Haeckel’s contribution to science was significant.  He was an avid supporter of Darwinism and, prior to World War I, more people learned about evolutionary theory from his works than from any other source.[6]  He was one of the first scientists to claim that humans evolved from apes and he was the first to divide the animal kingdom into unicellular and multicellular animals.[7]  He researched and wrote profusely on marine invertebrates such as jellyfish, sponges, medusa and radiolarians.  He formulated the concept of ecology and coined a number of scientific terms which are still in use today, including: phylum, phylogeny, ontogeny, protist, heterochrony and monera.  He was also a passionate artist, carrying sketchbooks with him wherever he went.  He chose not to limit his subjects simply to micro-organisms but drew frogs, underwater vegetation, birds and sea creatures as well.  One hundred of these works were included in his 1899-1904 Kunstformen der Natur (Art forms of nature) a true masterpiece of scientific illustration. In fact, his artistic style was said to have influenced the Art Nouveau movement, with its sweeping organic forms evident in objects ranging from jewellery to light fixtures and furniture. 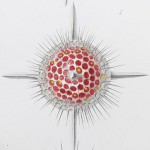 Die Radiolarien consists of two volumes, the first comprising some 572 descriptive pages on the protozoa which produce intricate mineral skeletons.  Approximately 0.1-0.2 mm in size, they tend to exhibit a central capsule dividing the cell into the inner and outer portions of endoplasm and ectoplasm.  They are found as zooplankton in the ocean, and their skeletal remains form a type of siliceous ooze which covers much of the seabed.[8]  Haeckel carefully described the distinguishing characteristics of these skeletons, and provided extraordinarily exact measurements for them, effectively increasing by half the number of known species of radiolaria.[9]  He also indicated the various seas in which a species lived and the depth at which it could be found and, importantly, attempted to arrange each species into a sort of homological system, documenting some fifteen natural families with the same or similar relation or structure. 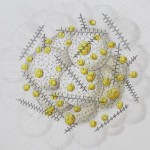 Volume two of Die Radiolarien comprises 35 magnificently detailed lithographic plates of the radiolaria that Haeckel discovered and described in volume one.  The illustrations are based on Haeckel’s own drawings and have been engraved by the renowned Berlin engraver Wilhelm Wagenschieber.  Many of them appear to be highlighted by hand in vibrant hues of red, blue, yellow, orange, brown and green. 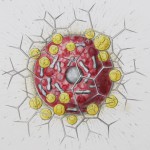 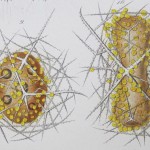 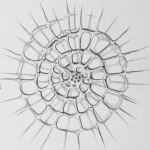 [1] Richards, Robert J., The tragic sense of life: Ernst Haeckel and the struggle over evolutionary thought, The University of Chicago Press, 2008, p. 67

[9] Richards, Robert J., The tragic sense of life: Ernst Haeckel and the struggle over evolutionary thought, The University of Chicago Press, 2008, p. 67