The golden calendar. With a perpetual almanac; illustrated by Walter Severn, and with new poems by various authors (Undated but c1864) 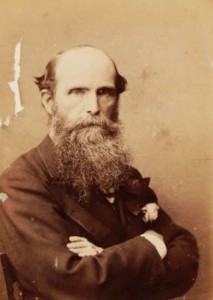 Born at Frascati, just south-east of Rome, Walter Severn was one of six children.  He and his brother Arthur, who would go on to become an established watercolour painter, attended Westminster School.  Though he showed a lively interest in sports such as boxing and rowing, he developed a fondness for art from an early age, sketching the ladies skating or playing croquet on his trips to Eglinton Castle, Scotland.

Like many of his contemporaries, art was not Severn’s sole vocation.  In 1847 he entered the Privy Council Office and became a career civil servant.[1]  Most of his working life was spent as an officer in the Education Department but he maintained a healthy interest in various branches of applied and visual arts.  In 1857 he reportedly began collaborating with his friend, renowned English painter Charles Lock Eastlake, in the making of art furniture, wallpaper and textiles, and later attempted to revive art needlework.[2] 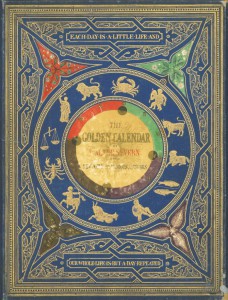 In 1866 Severn married.  His wife, Mary Dalrymple, was the sixth daughter of Sir Charles Dalrymple Fergusson, lawyer and 5th Baronet of Hailes.  The couple had six children themselves but Severn still found a remarkable amount of time for watercolour painting and book illustration, exhibiting some fifty paintings at London’s Agnews Gallery in 1874.  Two letters from John Ruskin followed, congratulating Severn on the sale of his paintings and praising his ability to sketch from nature, stating: “I have never myself seen anything so wonderful, in its way, as your power of obtaining true and complete effects in limited time”.[3]

Severn’s illustrations found their way into numerous books.  In c1853-54 he produced a pen and ink series of sketches Deer and forest scenery; in 1859 he illustrated Lord Houghton’s poem Good night and good morning, and in 1873 he decorated with floral borders, reminiscent of embroidery, The order for morning and evening prayer, litany, and occasional prayers.  Severn was passionate about the techniques associated with watercolour painting and he wanted others to succeed at the art form too.  He grew increasingly disappointed with the exclusive art societies, such as the Old Water-colour Society, which had rejected his brother’s membership application, and ultimately founded, with like-minded artists, the Dudley Gallery Art Society.  As President of the Society he wrote to The Times advocating for the permanence of modern watercolour paints, and in 1879 presented a lecture, On the art of sketching from nature in water colours, at the London Institution.[4] 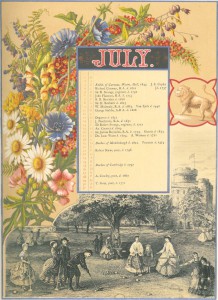 Among the books illustrated by Severn is The golden calendar, a collection of contemporary poetry dedicated to Her Royal Highness The Princess Mary of Cambridge.  Arranged according to the months of the year, its poems cover subjects such as: skating at Virginia Water; wild-fowl shooting; boating at Eton; fly-fishing; cricket and sketching; Ascot Cup Day; croquet; yachting; soldiers reaping near Aldershot; deer-driving; a meeting of hounds, and the Christmas tree.  More than 25 poets contributed pieces to The golden calendar, amongst them Thomas Godfrey Faussett, Martin Farquhar Tupper, William Allingham, Arthur Munby, Edwin Arnold and Francis Turner Palgrave.  Their works are surrounded by exquisite floral borders, chromolithographically printed from the watercolour drawings by Walter Severn, and further embellished with a variety of land-, town- and seascapes taken from his original etchings on copper.  Impressive in its royal blue cover, ornately stamped with borders of gold, signs of the zodiac, and highlighted with pictorial paper onlays of wheat, flowers and leaves, the Calendar is an important early example of printing in which chromolithography, etching and letterpress type all appear together. 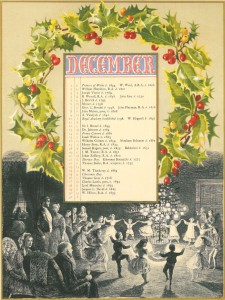 Heavily illustrated and filled with poems, the Calendar could easily be mistaken for a gift annual.  These annuals, essentially compendiums of poetry or prose, made popular gifts for women and children in the latter half of the 19th century, when giving presents at Christmas time became increasingly common.  Much more than a mere keepsake, the annuals had significant cultural value, and today their contents tell us much about life in the Victorian era, particularly with regard to shared values and standards.  Botanical enthusiasts would have cherished a gift such as the resplendent Calendar, with its chromolithographed periwinkles, primroses, violets, almond blossoms, daisies and poppies, to name just a few.   And, true to its origin and era, what else should grace the pages of December but holly… 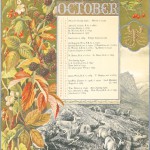 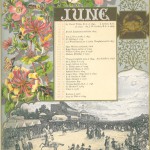 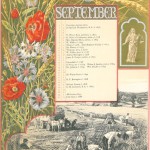 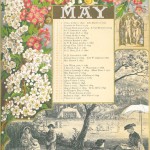