Savage life and scenes in Australia and New Zealand: Being an artist’s impression of countries and people at the antipodes. George French Angas (1847) 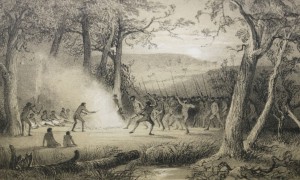 “The 10th of April was a sultry day; the ranges to the eastward of Adelaide were to be crossed… Burr, Bonney, Gisborne, and myself, all in “bush” costume, with tether-ropes and pannikins slung to our saddles, jogged on through the winding paths and beneath the rich shadows of the stringy-bark forests, till long after the last rays of the setting sun had flashed up from beyond the blue waters of the gulf, that lay bathed in red and purple glory to the westward.” The words of George French Angas in his 1847 publication, Savage life and scenes in Australia and New Zealand.  This is how he described the landscape near Mount Barker, visited as part of his 1844 exploration along the south-east coast of South Australia.

George French Angas was born in England in 1822.  One of seven children and the eldest son of George Fife Angas and his wife, Rosetta, Angas studied at Tavistock Grammar School in Devon.  He developed an early interest in art and natural history and, after a brief stint in a counting house, took up art lessons under English sculptor and artist Benjamin Waterhouse Hawkins. 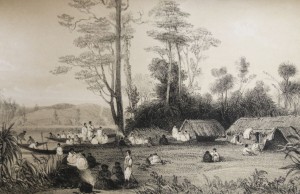 In 1841 Angas set sail for the Mediterranean. Inspired by what he saw, Angas produced his first book, A ramble in Malta and Sicily, which he illustrated with lithographs he’d sketched “on the spot” on stone.  In 1843 Angas set sail again, this time for Australia, and landed in the new Colony of South Australia in 1844.  He immediately joined an exploring expedition to the mouth of the River Murray and the Coorong and also headed south-east to Kangaroo Island and Port Lincoln.  He recorded the land and the sea, and the State’s inhabitants in watercolour, exhibiting the drawings in the Adelaide Legislative Council chamber in 1845.  These would later form the basis of Angas’ 1847 publication, South Australia Illustrated, a folio size edition of 60 hand-coloured lithographs.  By 1849 he had produced a further three books: The New Zealanders Illustrated, Savage life and scenes in South Australia and New Zealand and The Kafirs Illustrated, the latter reflecting his travels throughout South Africa. 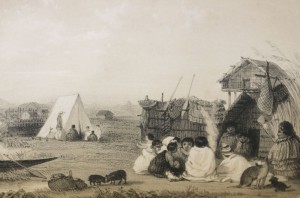 In December 1849 Angas married Alisha Moran and the couple moved to South Australia, where Angas’ father had settled just two years prior.  Almost immediately, Angas travelled to the goldfields near Bathurst and in 1951 produced two folios of hand-coloured lithographs of the goldfields of New South Wales and Victoria. Published in Sydney, Views of the gold fields of Australia comprised six sketches, drawn by Angas on the stone, and depicting the hectic activity on the new goldfields. The rare London version, Six views of the gold field of Ophir… was lithographed in England after the original drawings sent by Angas to the publisher.  Both are considered the most significant graphic records of early Australian goldfield activity, and the first visual record of the beginning of the Australian gold rushes.

In 1853 Angas was appointed secretary to the Australian Museum in Sydney, where he supervised the arrangement and classification of the first collection of Australian specimens, particularly shells.  He held this position for seven years, before returning to South Australia in 1860 to take up the role of Chairman of the district council of Angaston until 1862.  In 1863 he returned to London with Alisha and their four daughters.  He remained there until his death in 1886. 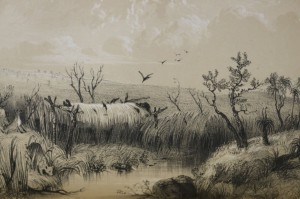 In his later life, Angas’ attention had turned more towards natural history than art.  He was an active member of the Zoological Society and the Linnean Society, contributing many papers to the Proceedings of the Zoological Society, most of them on Australian shells.  He also produced a further two books just prior to his death – Australia: A popular account of its physical features, inhabitants and productions, with the history of its colonization (1865) and Polynesia: A popular description of the physical features, inhabitants, natural history and productions of the islands of the Pacific (1866).  His keen interest in natural history, whether it was entomology, ethnology or conchology, was ever- present in both his written word and his artwork.  He was fascinated with the new colonies of South Australia and New Zealand and his works reflected an obvious admiration for the “grandeur and loveliness of Nature” at its wildest.[1] 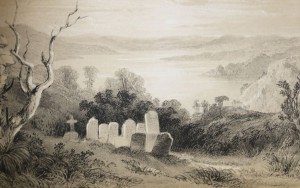 Nowhere is this interest more evident than in Savage life and scenes in Australia and New Zealand.  Essentially a journal of Angas’ exploration of South Australia and New Zealand, the two-volume set reflects what he describes as “wanderings on the outskirts of civilization, and among savage tribes who had never beheld a white man…”  It’s more than just a written record of his observations though, and contains numerous small engravings and several full-page lithographs based on the sketches he produced during his voyage.  The lithographs are by William Day and Louis Haghe, the famous London partnership of the Victorian era who became lithographers to the Queen.  They include scenes of a native corroboree, an elevated native tomb, a New Zealand forest, a quarantine burial ground and also a series of Aboriginal carvings, amongst others.  They support the text beautifully, which covers everything from Angas’ journey to the Murray; his notes on the Aborigines of South Australia and New South Wales; his experience exploring the south-east coast, Kangaroo Island and Port Lincoln; the settled districts of South Australia; his journeys around Illawarra, Liverpool, Campbelltown and Wollongong, and his voyage to New Zealand to explore Mount Egmont, Port Nicholson, Cloudy Bay, the town of Wellington and many more.  He describes, at length, the beauty of the land and the water, and marvels at the skill of the Aborigines, particularly in regard to catching animals and in the making of tools and implements.

Though an important historical record, Savage life and scenes… may include material which could cause distress to Aboriginal people.  Angas’ language, at times, reflects an inappropriate attitude due to the historical context in which the book was written. 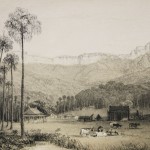 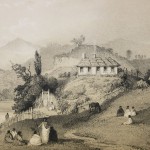 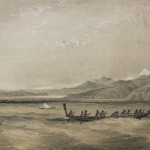 “Entrance to the Valley of the Wairau from Cloudy Bay, New Zealand.”