It seems fitting that the first University in Australia to admit women to academic courses should choose to use in its teaching an Atlas of Anatomy by an early advocate of women’s rights.

Our incomplete copy came over to the Library as a sad pile of individual plates, uncovered during the shift of the Medical School from Frome Road to its new premises next to the recently opened Royal Adelaide Hospital.

We were rather taken by the colourful and distinctive illustrations which were quickly identified through image recognition as belonging to An Atlas of Anatomy, or Pictures of the Human Body in Twenty-Four Quarto Coloured Plates Comprising One Hundred Separate Figures, with Descriptive Letterpress by Mrs Florence Fenwick Miller and published in 1879.

Miller was a leading British advocate of women’s suffrage who, along with Emmeline Pankhurst, was one of the founders of the Women’s Franchise League in 1889. She was one of the first woman to be admitted to the medical course at the University of Edinburgh but was refused a degree as women were unable to pursue clinical practice. Miller moved to London and gained her midwifery certificate at the Ladies Medical College in London.

She soon gave up medicine to become an established and celebrated lecturer on social reform, a journalist and an author of fiction and non-fiction, contributing to a large number of general and women’s magazine. She also served for nearly ten years on the London School Board.

Miller used her medical education to talk frankly in her popular lectures on ‘matters related to physiology,’ to advocate for birth control and to publish several books on anatomy.

Miller’s illustrations have been described as stylised and simplistic, and were apparently really intended for use by school students. The lithographs are clear and easy to understand and are really striking in their design and use of colour. The remnant plates from our copy were obviously used for many years in anatomical study and teaching, and the wear and tear only adds to their attraction.

The Atlas has been digitised from a copy held by Columbia University Libraries and is available through the Biodiversity Heritage Library https://www.biodiversitylibrary.org/bibliography/44099#/summary

While the University of Adelaide Library copy is incomplete, it appears to be the only print copy held in Australia. 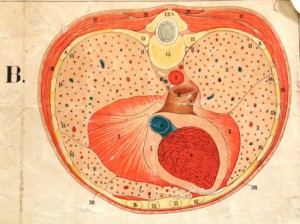 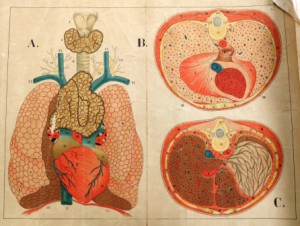 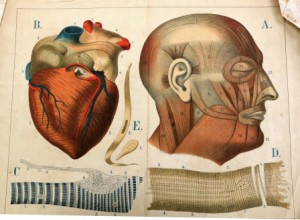 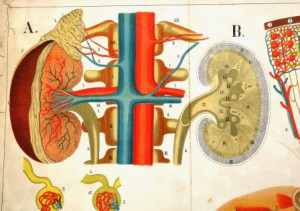 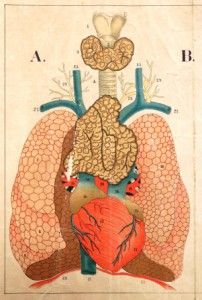