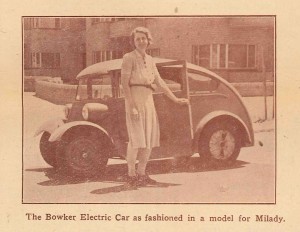 With the Adelaide 500 starting today we thought it was an excellent opportunity to share an article from this 1942 issue of the ‘Electrical and Engineering Review,’ featuring a new electric car! (Pictured here in a “model for Milady”) You can find the article on our Digital Archive

The “revolutionary” electric car was designed by Adelaide based entrepreneur, John Bowker. At the time the car cost only 1 shilling a day to charge at Adelaide’s power rates (approximately $3.60 today) using either A.C. or D.C. currents, could travel 151kms before requiring recharging and had a top speed of 38kmph. A video of the car in action can be seen on the State Library of South Australia’s Youtube Channel

The car was believed to be at an advantage over petrol cars owing to:

Despite the advantages the car never really became popular. In an interview in 1974, Mr. Bowker cited several reasons for the failure of his early vehicles, including the rapid loss of charge in long journeys, the reduction in battery performance over time and the tedious requirements of needing to inspect and top up all the battery cells every few days.