Views in the city of Adelaide. George John Freeman and Edward James Wivell (1874) 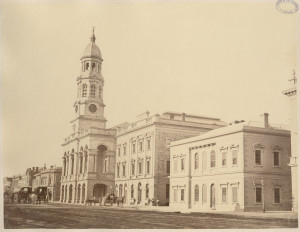 The Views of the city of Adelaide is a massive album, measuring almost 130 cm wide when open, containing 29 photographs.  Published in 1874, its sepia prints depict some of the city’s grandest buildings and beautifully capture people going about their daily affairs.  With photography by George Freeman and Edward Wivell, the album is an important early pictorial record of Adelaide.

Professional photographer George Freeman was born in London, the son of a base metals trader.  In 1861 he sailed on board the Countess of Fire, arriving in South Australia and setting up his Hindley Street photographic studio, with fellow hopeful Edward Belcher, shortly thereafter.

Somewhat of an entrepreneur, Freeman had a tendency to experiment with the latest techniques and in 1864 managed to set the cellar of the Hindley Street studio on fire.  The explosion, caused by his “chemical experiments”, was so severe that he was reportedly knocked unconscious and suffered serious hand and facial injuries as a result.

In 1865 Freeman produced the colony’s first known double portrait.  Described by the South Australian Register as “ingenious”, it featured two different portraits of the same man, one with his hat on and the other with it off, appearing together on the same card.  Other early Adelaide photographers, such as Bernard Goode, capitalised on Freeman’s ingenuity, producing novelty cards in which careful, side-by-side arrangement of photos saw subjects actually shaking hands with themselves.

It seemed his creativity had no bounds, his every novelty reported in The Advertiser.  To make photos which glowed in the dark, he experimented with luminous paint.  He made glass transparencies for magic lanterns and windows and used Philip Marchant’s patented dry plates, assisted by flash powder, to produce instantaneous action photos.  By 1879 he’d even debunked the trend for “spirit photographs”, demonstrating how easily they could be faked by exposing, in part, the plate to form light patches of spirits.

From the 1870s, Freeman’s business, which he called the Melbourne Photographic Company, was based in Rundle Street.  His company was the only South Australian agent for the Art Union of Victoria and he worked closely with Edward James Wivell, who was thought to have been in partnership with H. J. Johnstone in Melbourne.  Together they published Views in the city of Adelaide.

A teacher of dance and a professional photographer, Edward Wivell also had a keen interest in art.  In 1880 he took over the role of proprietor of Adelaide’s leading commercial art gallery from George Freeman when he established a gallery in his own Rundle Street premises.  Here, he exhibited European works and engravings after portraits by his father, Abraham, but also paintings of South Australian scenery by the renowned Birmingham-born artist Henry James Johnstone.  Today Johnstone’s magnificent Evening shadows, backwater of the Murray, South Australia can be seen hanging in gallery 2 of the Art Gallery of South Australia.

In 1881 Wivell moved to a more spacious building in Rundle Place.  It was well-lit, offered a superior gallery and a studio for amateur painters.  New artwork was promised monthly and subscribers paid a guinea for a six-month season ticket.  Johnstone’s works continued to be featured, among them A ford on the Acheron River, Victoria, and Off the track.

Wivell never lost his passion for photography though and was thought to have partnered with H. J. Johnstone in the photographic company Wivell & Johnstone which exhibited a photographic collection at the 1856 Victorian Exhibition of Art.  He was also closely associated with George Freeman, holding the position of Secretary of Freeman’s Melbourne Photographic Company until 1878, the pair having produced Views in the city of Adelaide just four years prior.

Contents of Views in the city of Adelaide

In 2009 Rare Books & Special Collections loaned its copy of Views to the State Library of South Australia for a digitisation project.  The State Library digitised both its own copy of the album, plus ours, and uploaded to its website the best version of each sepia print.  The results of our combined resources can be seen here. 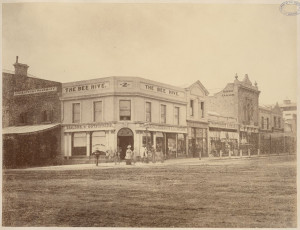 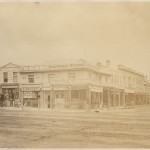 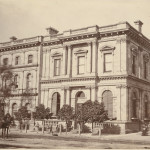 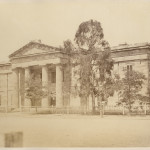 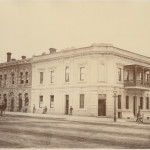 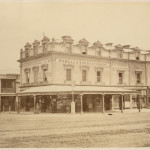 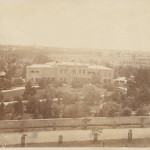