Monograph of the Paradiseidae, or birds of paradise and Ptilonorhynchidae, or bower-birds. R Bowdler Sharpe (1891-1898) 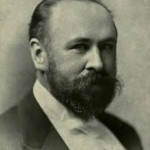 Though rarely afforded the attention of his contemporary John Gould, Richard Bowdler Sharpe was an accomplished ornithologist in his own right, and his contribution to the field was nothing short of astounding.  He was born in London in 1847 and cared for by his aunt who kept a preparatory school at Brighton.  Sharpe passed three years here, before transferring to Peterborough where he gained a King’s Scholarship, securing his further education.  He then followed his cousin to Loughborough Grammar School, continuing to achieve excellent academic results and attaining prizes for much of his work.  At the age of sixteen, Sharpe returned to London.  He quickly obtained a clerkship but his interest in birds persisted, and he soon found employment with a bookseller, where he enjoyed access to some of the finest books on birds.  He saved much of his wage, using it to purchase Kingfisher specimens, and in 1868 began writing his first book, A monograph of the Alcedinidae, or, family of Kingfishers (1868-71).  It would contain a staggering 120 leaves of hand-coloured lithographed plates.  It quickly ran out of print, and copies sold today have been known to fetch prices in excess of $18,000 AUD.[1] 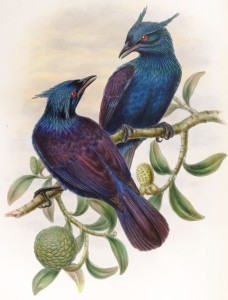 Remarkably, at the age of just nineteen, Sharpe was appointed Librarian at the Zoological Society of London.  He remained there for five years until 1872 when he was offered the position of Senior Assistant in the Department of Zoology of the British Museum.  Here, he was entrusted with the colossal task of preparing the Catalogue of the Birds in the British Museum (1874-98).  Offering both historical and geographic descriptions of every bird known to exist in the world at the time, the Catalogue spanned 27 massive volumes.  Sharpe’s dedication to the work is worthy of note here.  Of the 27 tomes, he authored eleven and co-authored two more.  Of the 11,548 species which appeared in the Catalogue, Sharpe described an incredible 5,181 of them.  Descriptions of the remaining 6,367 were shared between ten other authors.  It was a monumental effort and to this date the publication remains one of the most comprehensive of its kind.

During Sharpe’s curatorship of the Museum, its ornithological specimen collection grew from approximately 35,000 to a figure in the vicinity of half a million.  He acquired numerous private collections of birds and eggs, including the Gould general collection and the Gould series of Humming-birds.  Importantly, his reputation helped him to secure collections which would otherwise not have found their way into the Museum.  In 1885 Allan Hume donated his substantial Indian bird and egg collection to the British Museum, at the time stating that it should “not be forgotten that its acquisition… has been solely due to the fact that Mr. Sharpe was at the head of the Ornithological branch…”.  That collection comprised some 82,000 specimens, almost all of which were placed in the Museum’s cabinets. 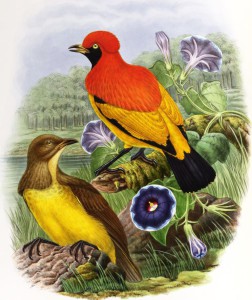 In 1895, Sharpe’s good nature, irrepressible optimism and world-wide reputation as a dedicated ornithologist led to his promotion in the Museum.  As Assistant-Keeper of the Vertebrate Section of the Department of Zoology, he now assumed charge of, not only the birds, but also the mammals, reptiles and fish.  Though busy maintaining the bird room, answering queries and attending to the Museum’s many visitors, Sharpe still found time to produce countless catalogues, to edit Allen’s Naturalists’ Library and to publish his two-volume set, A monograph of the Hirundinidae or family of swallows (1885-1894).  It was during this time, too, that much of his work on Monograph of the Paradiseidae, or birds of paradise and Ptilonorhynchidae, or bower-birds was also completed.

In his preface to John Gould’s The birds of New Guinea and the adjacent Papuan Islands… (1875-1888), Sharpe appealed for subscribers for a book he intended to title “The Avifauna of Paupasia”. His appeal was clearly successful, for the first volume of Birds of Paradise… was published just three years later.  It contained 79 spectacular, life size plates, each accompanied by descriptive letterpress in which Sharpe discussed the bird’s physical appearance, geographical location, habits, size and occasionally also its diet and the sound of its call.  Though some of the plates were printed from the stones used in Gould’s Birds of New Guinea, many of the species where featured for the very first time in Birds of Paradise.  Sharpe chose specialist artists William Matthew Hart and John Gerrard Keulemans to illustrate the two-volume set, and the majority of the plates were by or after Hart, by Hart after John Gould, or by or after Keulemans. 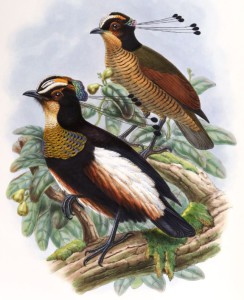 Sharpe’s book was produced at a time when lithographic plate production had reached its peak, and the subtlety and precision of every single illustration is immediately apparent.  The plates have also been painstakingly coloured by hand.  In fact, it has been suggested that this laborious process may have been completed by Sharpe’s own daughters, three of whom were very talented colourists.[2]  It was also possible that the birds’ striking, almost iridescent, plumage was heightened by the addition of gum arabic.  This sap, collected originally from the gum arabic tree, and today from various Acacia species, tended to increase the luminosity of paints and helped to prevent the colours from lightening over time.

So revered as an ornithological masterpiece was Birds of Paradise, that in 2011 David Attenborough, who, as a boy had been enthralled by the book, wrote the foreward for The Folio Society’s reproduction of the work.  Like the original, it too is a masterpiece, its sophistication a fitting tribute to one of the 19th century’s most talented scientists. 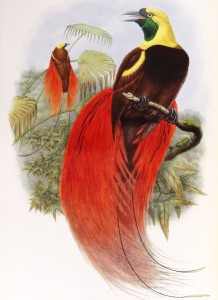 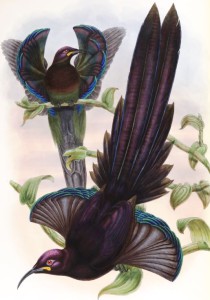 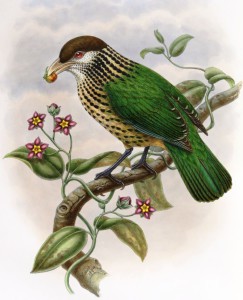 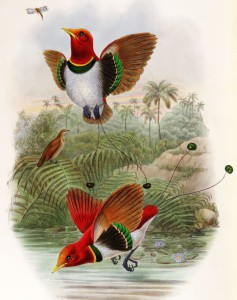 [1] Sotheby’s, Lot 12, Sharpe, Richard Bowdler, A monograph of the alcedinidae: or, Family of Kingfishers. London. Published by the author. 1868-71.