The tragedy of William Kinmont 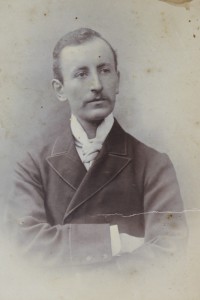 In 1891 the 24-year old William Kinmont left his native Scotland to try his luck in the dominions. A recent M.A. graduate from the University of Edinburgh, William had distinguished himself as Senior President of the Students’ Representative Council and editor of the student magazine. 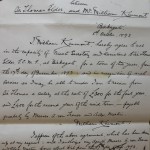 Copy of the Agreement

Armed with excellent references, he sought a teaching position, and soon found employment as a tutor with the family of Mr Adam Smith of Hynam near Naracoorte. In October 1893 he signed an agreement to act as the Private Secretary of Sir Thomas Elder.

For many years, Jennifer Kinmont has been compiling scrapbooks of her family history. In her notes for the 1999 family reunion she wrote:

“Elder found in William just the young man he needed to help him run his estate ‘Birksgate.’ William was cultured, elegant and charming – and a great organiser. He also loved music and was entertaining and intelligent company.”

William revelled in the patronage and status of his position. William in a letter to Lenore Smith, wrote:

I have brought [my horse] Signal up with me [to The Pinnacles] and also a new light hooded buggy suitable for the hills, which I invested in before leaving Adelaide, so that I get plenty of riding and driving both with Sir Thomas and by myself. Sir Thomas has very kindly given me the services of a young boy “Jack” who sees to my pony and pony trap, so you see I am very happy.

William’s younger brother Edward followed him to South Australia and, having graduated from Edinburgh with a Diploma in Medicine and Surgery, immediately registered as a medical practitioner and obtained a six-months posting to Gumeracha followed by 3 years at Mannum.

In a letter to Edward, William conveyed the pressures of his position:

… I am awfully busy just now at Birksgate over Elder Exploration Expedition work and other duties: and then Sir Thomas has had a bad knee, which needs constant attention from me.

Unfortunately, while William was a keen horseman he was a poor rider, and in December 1893 was thrown from his horse while riding on Glen Osmond Road near Birksgate. His horse shied while passing through a narrow cutting in the foothills and backed into a wall, driving one of William’s spurs into its side. William was thrown and, suffering from broken ribs, was carried unconscious into the home of the local postmistress, Mrs Bowen. Seemingly recovering from his injuries, Sir Thomas moved William some 8 days later to his Mt Lofty residence, The Pinnacles, to recuperate. William seemed to recover, but a week later, having eaten a hearty breakfast and after conversing with Professor Watson, he collapsed and died.

Although William had worked as his Private Secretary for only a year, Sir Thomas obviously thought a great deal of him, and had extended an invitation to his brother Edward to come and stay at Birksgate when he could be spared from Mannum.

The funeral took place from the Pinnacles before William being buried at Stirling Cemetery. Present at the funeral were Thomas Elder, Robert Barr Smith and his son Thomas Elder Barr Smith, Dr Stirling, Professor Watson, and Peter Waite.

William’s possessions must have been returned to his family after his death. Among these were a transcript of “Notes from a Pocket Journal: A Trip to Lake Hope in 1861 by Sir Thomas Elder G.C.M.S.” in William’s handwriting, and a journal in Thomas Elder’s hand containing an unrecorded lecture delivered to a working men’s organisation during a trip to England in 18??

Jennifer Kinmont, on behalf of the Kinmont family, generously donated these to the University of Adelaide Library in 2016, along with theatre and dance memorabilia collected by Jennifer’s mother Joan Kinmont, author of the long poem “This, My Son” which sold over 100,000 copies and ran to several reprints. 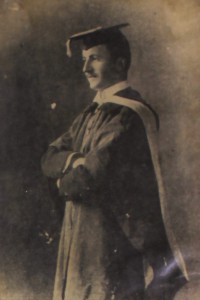 William Kinmont as a Graduate 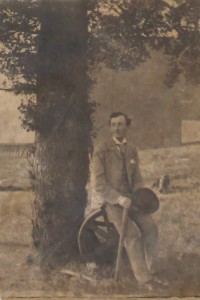 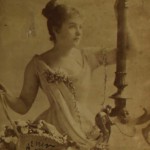 According to family history, William was rather taken with the American born lyricist and poet, Adelaide Detchon, and assisted in organising her Edinburgh concerts. Unfortunately, Adelaide was keener on her career than she was in William, and he made the decision to emigrate to South Australia. 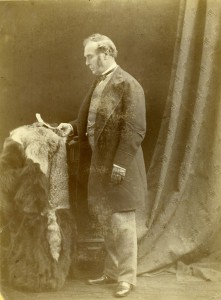 In 1878 Sir Thomas Elder departed the Colony of South Australia and sailed to England to be knighted with the Order of St Michael and St George. Before his return to Adelaide in May 1879, he gave a lecture on South Australia “chiefly addressed to working men.”

The colony of South Australia was founded in the year 1836. Seven years hence its Jubilee will be celebrated on the completion of its 50th year. Great and marvellous have been the changes that have taken place in this small dependency of the British Empire since its colonization 43 years ago – I myself have been connected, and closely identified, with its history for nearly 40 years … Of the rise and progress of the Colony of South Australia therefore I “feel” fairly warranted to speak, and I now propose to give you, in a condensed form some of the results of my personal observations (and experience) which I trust will have the effect of engaging your attention for a little time and it may be of enlarging your knowledge on the subject.

He was a man who delighted in new experiences, waxed lyrical about “this strange clime, which lies far on the other side of the world where the sun is now shining, and where the midnight chimes are being rung while we are at our Monday meal” describing:

Vast deserts of arid sands, winds from the north that blow hot and from the south that blow cold, trees that cast their bark instead of their leaves, tulips and lilies that grow high in the air, and ferns which attain the growth of trees, cherries whose stones grow on the outside, birds with the most beautiful plumage which cannot sing, and the platypus, a curious animal half bird and half fish.

The exploration of the interior, and its potential for pastoral enterprises, was close to his heart: “a subject which has engaged my attention for a number of years, and I had partly the furtherance of this object in view when in 1862 I imported camels from India, which have now become quite acclimatized in South Australia, and have increased in number from 110 to 500 or 600.”

A large portion of the speech is devoted to the history of exploration in South Australia, from the Leichardt, Eyre, Forrest and Sturt expeditions, to McDouall Stuart’s north-south crossing. Elder “knew Stuart well, both as boy and man, having played with him as a schoolfellow and heard him describe his last successful expedition shortly before his death.” Also described are the expeditions sponsored and supplied with camels by Elder – those led by William Gosse, Colonel Warburton, John Ross, and Ernest Giles.

1n 1861 Elder travelled as far as Lake Hope with the McKinlay search expedition sent out to rescue the ill-fated Burke and Wills part. Elder failed to persuade McKinlay to send out an advance party to rescue the survivors “otherwise we should have found out King before Howitt.” This episode is also recounted in William Kinmont’s transcript of Elder’s “Notes from a Pocket Journal.”

Elder also espoused the benefits of foreign travel and new experiences – which “have an impressing effect upon the mind, expand and open up the faculties, cultivate and mature the powers of actions, and teach a knowledge of the world so necessary to everyone who’s called upon to engage in the busy scenes of active life.”

Yet his most earnest praise was reserved for his new home:

My first impression of Adelaide, and may I say of the Colony at large, were in the highest degree favourable. I found the City standing on a fertile plain about 8 miles distant from the sea, with a range of hills, called the Mount Lofty range, forming a beautiful background, and the plains in front studded with houses and gardens. Since then the City & plains have made wonderful strides towards improvement, but after four and twenty years’ experience my first impressions remain. And I know of no place in the wide world which presents a more desirable residence of simple tastes to men of quiet and retiring habits than South Australia.

The climate however was found to be less desirable:

We have hot winds occasionally in South Australia, and very hot and disagreeable they doubtless are …. When sweeping over the plains the wind comes in gusts, not cool and refreshing but hot and piercing, and you feel your parched tongue withered and shrivelled up in your mouth. You feel in a fever, & you have such a sense of suffocating and heat, and pain that you seek for shelter wherever it can be found. Happily these winds are not of frequent occurrence or of long duration but as they occur at the time the crops begin to ripen the injury sustained is sometimes very serious … I remember one dreadful Sunday a good many years ago when the apples were literally roasted on the trees in our garden and when our dinner was completely spoiled by the excessive heat.

Despite the heat, he held that “the climate of our adopted land, with its bright skies and clear atmosphere has, when it is at its best, a charm which infuses itself into human life with the exhilarating air one breathes; and which lingers long & yearningly in the memory of those who have fully enjoyed it when they have returned to the gloom & austerity of their native land. I consider myself one of that happy number.”

Elder urged his audience of working men to consider the benefits of immigration to South Australia where, through opportunity and industry they could achieve “what might have appeared a wild dream in his native land stands boldly here as a reality.”

He also briefly expounded on the wages of working men and the cost of living, on advances made in railways and roads, industry, land laws, churches, education and the production of wheat, wool and copper, concluding that:

In glancing at this retrospect one cannot fail to recognise the great success that has attended the enterprise of a handful of Englishmen, who, without adventitious aid have, during a single generation, established a flourishing community reproducing most of the social and material advantages of the Mother Country, and much of the Old World civilization, conducive to the happiness and prosperity of a people: – 50,000 to 60,000 men supporting thrice their number of women and children, occupy 200,000 sq .miles of pastoral country and possess 7 millions of sheep, – own upwards of 6 million acres of land, and grow 12 million bushels of wheat; conduct an external commerce of nearly 10 Millions Sterling and raise a million and a quarter of revenue. Such is the material result shown in the forty second year of the colonisation of South Australia.

Sir Thomas Elder was exceedingly proud of South Australia, and his part in developing a prosperous colony. Despite referring to Great Britain as his Mother Country, his heart was in South Australia.

The climate of our adopted land, with its bright skies and clear atmosphere has, when it is at its best, a charm which infuses itself into human life with the exhilarating air one breathes; and which lingers long & yearningly in the memory of those who have fully enjoyed it when they have returned to the gloom & austerity of their native land. I consider myself one of that happy number. 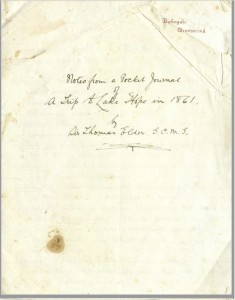 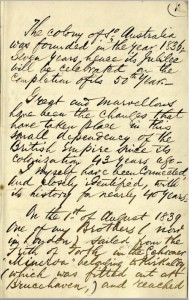 Interested in learning more about Sir Thomas Elder? Check out our History Festival exhibition, ‘For the Greater Good: The Generous Life of Sir Thomas Elder (1818-1897)’. On display in the Barr Smith Library Reading Room, The University of Adelaide, 1 May – 15 June. Learn more about it over on our website 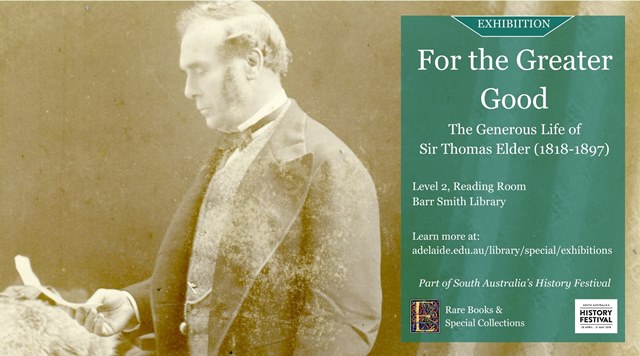