Australia at war: A winter record made by Will Dyson on the Somme and at Ypres during the campaigns of 1916 and 1917; with an introduction by G. K. Chesterton, 1918 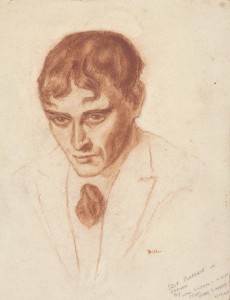 This month Rare Books & Special Collections pays tribute to those engaged in military service, past and present, by taking a closer look at Lieutenant Will Dyson’s book, Australia at war.

The ninth of eleven children, Dyson was born in 1880 at Alfredton, a suburb of Ballarat, Victoria. Though largely self-taught as an artist, he was encouraged to draw from a young age by his two elder brothers, one of whom already worked as an artist for the Sydney Bulletin. As a teenager he submitted several sketches to the Bulletin. The first of these was published in 1897, and by the early 20th century his work appeared regularly in Adelaide’s Critic, the Gadfly, the Clarion and Melbourne’s Punch. In fact, in 1903 Dyson succeeded his brother, Ambrose, at the Critic, drawing for it Australia’s first coloured caricatures.

In 1909 Dyson married Ruby Lindsay, sister of his close friend and renowned Australian artist and editorial cartoonist, Norman Lindsay. Ruby was a talented and recognised artist in her own right, and the pair, finding it difficult to obtain well-paid work in Australia, longed to broaden their horizons. They left, accompanied by Norman, for London in 1910, and it was not long before Dyson’s big break presented itself. In 1912 the editor of the Daily Herald appointed him cartoonist-in-chief, giving him not only a £5 weekly wage but, importantly, freedom to fill an entire page with his own ideas and thoughts – and this he certainly did. Tired of the stiffness and pretension so prevalent in pre-war England, Dyson vigorously promoted the working man, and his socialist outlook was evinced in graphically dramatic and, at times, sensationalist cartoons which criticised unemployment, hunger and suffering. His cartoons frequently depicted the wronged worker and the evil employer, prompting some politicians to suggest that Dyson was taking his carte blanche privilege too far.

Dyson was also a staunch Australian nationalist and in 1915 he published a series of caricatures, epitomising anti-German sentiment, in his book Kultur Cartoons. His satire had increasingly turned to war, and this must have aided his 1916 application to join the Australian Imperial Force. Writing to AIF Commander General Birdwood, Dyson expressed a desire to “interpret in a series of drawings, for national preservation, the sentiments and special Australian characteristics of our Army”. He was subsequently appointed, without pay or allowance, Honorary Lieutenant, and in December that year travelled to the Western Front. By 1917 his appointment was formalised, making him the AIFs first official war artist. He was wounded twice during the war and his brother-in-law, Reg Lindsay, was killed in the Second Battle of the Somme, and yet he returned to continue to produce some of the most emotive drawings of his career. A collection of these, along with Dyson’s interpretive text, would form Australia at war: a winter record… also titled Australia at war: drawings at the front.

Those unfamiliar with Dyson’s more compassionate work might question the suitability of a caricaturist in recording the tragedy of war. However, unlike his early satirical cartoons, which emphasised, even derided, a subject’s physical appearance, Dyson’s war pieces were, in many ways, gentle. He used gesture as a powerful expression of the soldier’s experience; slumped shoulders, drooping heads and vacant stares demonstrated utter physical exhaustion and metal fatigue.[1] He had no interest in drawing great battle scenes; he wanted only to represent the ordinary Australian soldier. Perhaps Chesterton, in his introduction to Australia at war best described the difference between Dyson and the common caricaturist when he wrote: “… it was never the comic but rather the serious features that he caricatured. It is the soul rather than the body that he has drawn out in long fantastic lines. His comedy has never been merely comic, but rather philosophic and poetic.” 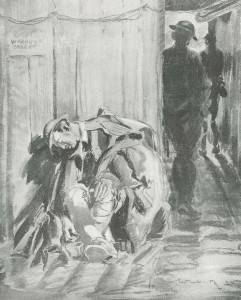 Dyson supplemented each of the 21 Australia at war… sketches with his own moving prose. Pictured and poignantly described here is a drawing of an exhausted soldier which he has titled “Dead beat”.

“He was there as we came back with Wilkins after watching the reply to the S.O.S., sleeping on the eternal petrol tin, and was there when we got breakfast – dead to the world…. I have not at all drawn him as childish as he looked…. He had come down with a relief from somewhere near Glencorse Wood and had lost himself and floundered all night in shell holes and mud through the awful rain and wind which seemed to have power to wash out the very gunfire of Manton’s battery. He had floundered into the cover of the tunnel and stopped there, disregarded, save for occasional attempts to assist on the part of the men – attempts that could not penetrate through to his consciousness past the dominating instinct to sleep anywhere, anyhow, and at any cost…. The boys tried to get him to report to the Pommy Colonel in another gallery… but he dropped off again into that coma of a spent man, too spent to be wholly unconscious of his misery even in sleep… and I heard him muttering in a sullen diminuendo, like a rebellious schoolboy, ‘Bloody war!! Bloody war!! Bloody war’…. He looked like the one hundred others one has seen – like many in the company that where lining the corridors, but that his abandonment was greater – he was emphatically lost, lost like a child, and evoking some of the pity that goes to a child, he looked so very young – that quality which here has power to touch the heart of older men in the strongest way. To see going into the line boys whose ingenious faces recall something of your own boyhood – something of someone you stole fruit with, or fought with or wagged it with through long hot Australian afternoons – too see them in this bloody game and to feel that their mother’s milk is not yet dry upon their mouths….” 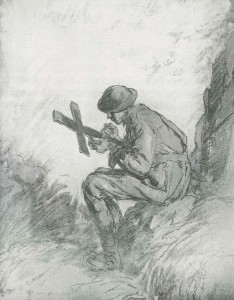 Equally as heart-rending is Dyson’s sketch and description of “The mate” in which he portrays the grief experienced at losing a friendship too early.

“Most of the boys are of that age at which friendship is not the tepid give and take of years of discretion. Remember our friendship at twenty! At that age a friendship is a thing intense and unquestioning – it is blasphemy to it to think of it as anything less than eternal… Normally those friendships wither painlessly in their season, but this generation, or what maimed fragment of it lives through all, will live with the memory of heroic friendships cut off at the height of their boyish splendour, and which can never suffer the slow deterioration of disillusionment… You see what an invitation to grief is friendship with the regiments of foot… They are touchingly profane about the dead friend… They see that a cross comes from the battalion carpenter, or the especial friend like little ‘W-‘ makes a cross himself and carves an ornate rising sun on it – but they are movingly profane about it all, employing all those proper expedients of the Digger for the disguising of deep feeling – of the exhibition of which the boys are so timid that they have evolved a language compound of blasphemy and catch phrases in which they can unpack their hearts without seeming to be guilty of the weakness of emotion.”

In 1919 Dyson’s wife, Ruby, died from influenza. Some say that the fire went out of him at this time, and the level of his grief is certainly felt in his Poems: in memory of a wife, released later that year.[2] He was known to conceal his innermost feelings and at times was deeply depressed, and yet despite this, perhaps even because of it, his drawings had a passionate rawness that saw him highly acclaimed as an artist. His death in 1938 made newspaper headlines around the world and his last cartoon, published on the day he died, saw a return to his original fiery form. Captioned “Once we were the most loathsome things that flew!”, it showed two vultures, watching from a crag, the planes of Francisco Franco bombing defenceless Barcelona during the Spanish Civil War. 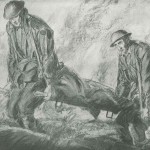 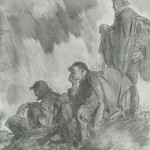 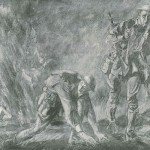