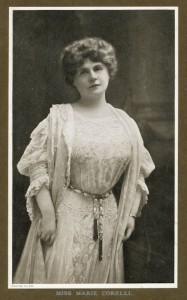 The work of one of Britain’s most popular authors of the Victorian era, The Devil’s motor is a fantasy, dramatically illustrated by Arthur Severn, son of the famous English portrait painter Joseph Severn.

For someone so famous and highly paid, surprisingly little is known about the childhood of Mary Mackay, who wrote under the pseudonym of Marie Corelli. It’s thought that she was born in or near London in 1855, the illegitimate daughter of Dr Charles Mackay, Scottish poet, journalist and songwriter, and his servant Elizabeth Mills.[1] At the age of eleven, she was sent to a convent in Paris to be educated, and returned to the U.K. four years later.

In 1886 Mackay produced her first book, A romance of two worlds. It was an immediate success. An interesting mix of science fiction, supernatural romance and fantasy, the book centred around a young heroine who, suffering debilitating illness, was given a slumber-inducing potion. She experienced divine visions, travelling through solar systems and meeting a guardian angel who shared with her the truth of religion and the secret of human destiny. [2] Mackay had never anticipated the success the book was to have; it’s now considered one of the most influential occult novels of its time. Not long after its publication, and that of her second and third books, Vendetta! (1886) and Thelma (1887), she was to become the best-selling author in England. In the late Victorian-early Edwardian era, her works actually surpassed the combined sales of Rudyard Kipling, H.G. Wells and Arthur Conan Doyle.[3] 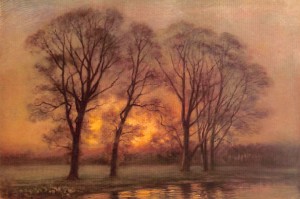 Not all of Mackay’s novels enjoyed this level of success though. Her fourth, Ardath: The story of a dead self (1889) did not sell well, much to Mary’s disappointment. Essentially the tale of a poet, dreaming of his past life, and coming to the realisation that his current existence was the direct result of prior mistakes, Ardath was somewhat esoteric. Most readers failed to understand it; Mackay herself described it as “welcomed by a distinctly cultured minority of persons famous is art, science and literature…”.[4] Though the book was praised by British magazines, such as The Athenaeum, the majority of the literary press shunned it. Indeed, Mackay’s relationship with the press was prickly at best. 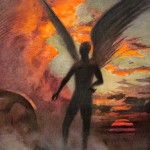 Mary was frequently left hurt and confused by the literary establishment’s attitude towards her; she interpreted it as one of personal dislike, and it’s possible that she was right, for she had such an ability to alienate people. At times her sense of outrage was justified. Grant Allen of The Spectator referred to her as “a woman of deplorable talent who imagined that she was a genius, and was accepted as a genius by a public whose commonplace sentimentalities and prejudices she gave a glamourous setting”.[5] Mackay was never afraid to respond though, and she verbally attacked newspapers, journalists, photographers and critics in almost all of her novels. The sorrows of Satan, arguably her best work, certainly the highest selling (approximately 50,000 copies in its first seven weeks), was in many ways “written as a sustained attack on the alleged corruption of modern literature, contemporary critics and journalistic practice”. [6] Her anger at the press was so intense that she broke with tradition, refusing to send review copies of Sorrows… to the press and instructing the publisher to insert a notice at the head of the first page advising them that they would have to obtain the book in the usual way, along with the rest of the public.[7] 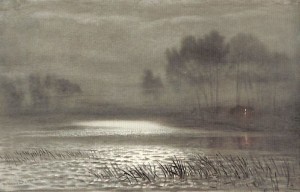 Her personal life, too, was constantly under scrutiny. Mackay lived with her female companion, Bertha Vyver, from her early 20s. The two spent more than 40 years together, with Bertha receiving all of the author’s possessions when she died, and staying on at Mackay’s house in Stratford-upon-Avon until her own death. Despite numerous references in her works (though none of them gender specific), to the secretive nature of sexual desire, Mackay never identified herself as a lesbian. Although some argued that her homosexuality was obvious,[8] others have concluded that it was much more likely the pair were simply lifelong companions.[9] The only man that she did appear to have a romantic affection for was Arthur Severn, artist and friend of John Ruskin.

In the posthumously published Open confession: To a man from a woman (1925), Mackay’s feelings for Severn are outlined in the form of a private journal. Despite his being a married man, it’s clear here that she experienced an obsessive love for him. It was a love unrequited though, and at times Severn was actually quite cruel to her, belittling her success as an author.[10] It did not stop her from collaborating on a book with him though, and in c1911 The Devil’s motor, an allegory with its concurrently beautiful and macabre illustrations, was published. 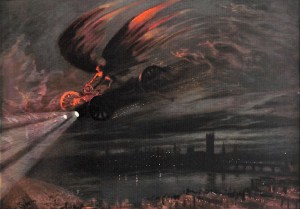 Mackay had long admired Severn’s artistic ability, and a dark fantasy such as The Devil’s motor needed just the type of fearless illustrations he could provide. In fact, the text and the colour-plates complement each other so perfectly, it’s almost impossible to imagine a better fit. The opening paragraph begins:
“In the dead of midnight, at that supreme moment when the Hours that are past slip away from the grasp of the Hours yet to be, there came rushing between Earth and Heaven the sound of giant wheels, – the glare of great lights, – the stench and the muffled roar of a huge Car, tearing at full speed along the pale line dividing the Darkness from the Dawn.”

Here, the motor car was depicted as a vehicle of evil. It was symbolic of the destructive forces of greed and modern industry, and Severn’s bold and bloody-coloured illustrations of Satan driving around in the car almost forced the reader to sit up and take notice; to heed Mackay’s message – that we must not let the speed of progress make us “forget to halt to gather the flowers of thought… the fruits of feeling.” We must “listen to the singing of the birds of hope” and hear the “murmur of the cool grasses waving in the fields of peace…” 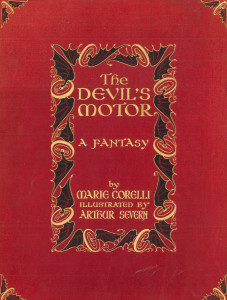 Not content to leave the delivery of her message to text and illustrations alone, Mackay also arranged for the book to receive a very special binding. At first glance, it appeared to be a Christmas gift book; its cover was bright red and its black border embellishments certainly looked like holly. A clue to its real meaning, however, lay in the book’s second paragraph:
“And he who stood within the Car, steering it straight onward, was clothed in black and crowned with fire; large bat-like wings flared out on either side of him in woven webs of smoke and flame…”
That holly-style decoration on the cover was actually very cleverly designed bat-winged car wheels. 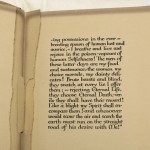 Even more unusual was the smell of the book. Intended to smell like motor oil, the pages were darkened around their edges, almost taking on the appearance of fire damage. Unfortunately the substance used to create the smell wreaked, in time, an entirely different kind of havoc. Highly acidic, it began to break down the book’s pages, one by one, with many now completely cracked and disintegrated. For preservation purposes, the library’s copy of The Devil’s motor was digitised in 2017, with the online version available for viewing here.

The Devil’s motor is a remarkable book in so many ways. Its text, illustrations and binding design, when considered together, highlight exactly why Mackay’s hold over the reading public was, and still is, absolutely undeniable.

[1] Malerbo, Rocky, ‘An introduction to the works of Marie Corelli’, The Victorian web: Literature, history & culture in the age of Victoria, 25, August 2003, accessed online 17 May 2018,http://www.victorianweb.org/authors/corelli/intro.html