A general system of surgery in three parts… Laurence Heister (1743) 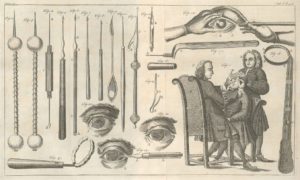 Lorenz Heister was born at Frankfurt-am-Main, Germany, in 1683 to a lumber and wine merchant, and his wife, also the daughter of a merchant.  He attended the Gymnasium there, whilst receiving private lessons in French and Italian, before going on to study medicine at the University of Giessen in 1702.  In 1703 he followed Georg Möller, his teacher, to the University of Wetzlar where he studied until 1706.  He then left for Leiden, Amsterdam, where he continued his education in anatomy and surgery, obtaining his M.D. in 1708.  He attended botanical and chemistry lectures, as well as anatomical demonstrations, and he took a particular interest in diseases of the eye, even learning the grinding of glasses.[1]

In 1709 Heister turned his attention to the military, serving in the Dutch army as a field surgeon during the siege of Tournai, France.  He also tended the wounded in the Battle of Oudenarde (now Oudenaarde in Belgium) plus those injured in the Battle of Malplaquet (France), one of the bloodiest battles of the War of the Spanish Succession.  It was here that Heister truly distinguished himself with his care for the wounded.

In 1710, at the age of just 27, Heister was appointed Professor of Anatomy and Surgery at the University of Altdorf, near Nürnberg.[2]  It was during his time here that he commenced what would become his life’s work.  Heister’s surgery took a great deal of planning and the first edition was not published until 1718.  Lorenz, meanwhile, had been lecturing to his students in Latin.  It was the common language of science and of educated men but he soon realised that his students were not that well educated.  Since few of them could read or speak Latin, he resolved to write his book in the mother tongue, German.[3]  It was a text-book, an encyclopaedic treatise really, and the first of its kind in Germany.  Filled with copperplate engravings of operations and instruments, it quickly became the pre-eminent surgical text in Europe.  It was so popular amongst physicians and surgeons that it was translated into French, Italian, Spanish, Latin and Dutch, and from the Latin version an English translation was produced in 1743, which bears the modified title, A general system of surgery in three parts… 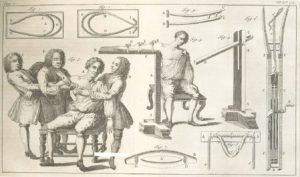 The first of its three sections, “Of Wounds, Fractures, Luxations, Tumours, and Ulcers, of all Kinds” began with Heister’s background on wounds, their symptoms, suturing (and the instruments required for it) and how to treat wounds to specific parts of the body such as the face, abdomen and thorax.  It also discussed the treatment of bone fractures generally and touched on fractures to the jaw, nose, ribs, vertebrae, hands, thighs and feet, amongst others.  Twelve chapters were dedicated to luxations – dislocations of the bone at the joint, and a further nineteen to tumours, including abscesses and boils, plus other conditions such as chilblains, gangrene, burns and cancer.  The first book concluded with several chapters on ulcers, methods for treating those particularly stubborn, and even those “supposed to be produced by Magic or Witchcraft”.[4] 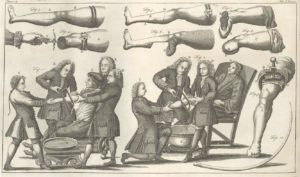 The second section, “Of General Operations practicable in several different Parts of the Body”, began with phlebotomy or ‘bleeding’, which Heister described as the opening of a vein “by a sharp-edged and pointed Instrument of Steel, for extracting a proper Quantity of Blood, either for the Preservation or Recovery of a Person’s Health.”   A good Phlebotomist, he said, must have a steady, nimble and active hand, with a sharp eye and undaunted mind.”  A regular practice of the 18th century, on most parts of the body, phlebotomy was covered with rigour in the second section, Heister providing instructions for the opening up of arms, hands, feet, the forehead, neck, even the inner corners of the eye.  Aneurisms and warts were given some attention, so too the practices of cupping, acupuncture and bleeding by leeches but it was amputation and operations of the eye which received much of the second book’s focus.  Of finger and toe amputation, Heister suggested that a pair of strong scissors would do the job, whilst removal of an entire hand might simply require one blow with the mallet upon a sharp chisel.[5]  Of suffusions of the eye or cataracts, Heister described two methods of treatment – couching with a needle or the use of internal and external remedies, such as medicines prescribed by a physician.  In fact, Lorenz studied the eye in great detail, completing his doctoral thesis De Tunica Choroidea Oculi in 1708, which refuted the belief that the choroid was simply a continuation of the membranes of the brain.[6]  He would later become one of the first doctors to suggest that the true and common cause of the cataract was an opacity of the chrystallin (a water-soluble protein found in the lens and cornea of the eye), and did not relate in any way to the aqueous humour, as previously believed.[7] 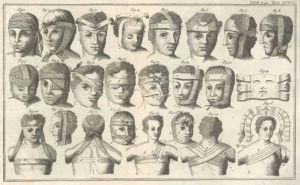 The final section, “Of the several bandages applied in all operations and disorders” described the physical nature of bandages, including their composition of strong linen, their size, whether “square like an Handkerchief, or a Napkin… or long and narrow, when designed for Wounds, Fractures, Luxations…”, as well as their methods of application.[8]  Heister provided detailed instructions for the use of bandages in the dressing of wounds, suppression of haemorrhages and in the healing of fractures.  The section, with its clear and concise text, just like the first and second, was illustrated with impressive copperplate engravings, making it very easy for physicians to follow Heister’s recommendations.

Lorenz’s contribution to surgery and teaching was significant.  Thousands attended his lectures, and his works served to educate physicians throughout Western Europe for several generations, his General system of surgery considered a standard reference in Vienna as late as 1838.  Heister’s own library consisted of more than 12,000 volumes and he possessed almost 500 surgical instruments.[9]  He described the use of spinal braces, conducted the first post mortem section of appendicitis, introduced the term tracheotomy and established, in Helmstedt, what was considered one of the largest and finest botanical gardens in Germany. 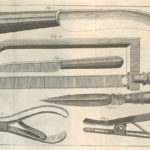 Plate 13: Scalpel, saw, knives and pliers for amputating bones of the limbs. 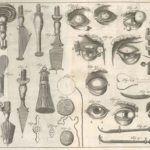 Plate 15: Steel instruments and brushes, plus eyes with tumours to the eyelids 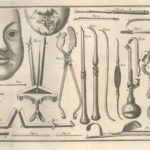 Plate 20: Tools for drawing teeth and for performing surgery to the lip area.

[4] Heister, Lorenz, A general system of surgery in three parts… “Of ulcers supposed to be produced by magic or witchcraft”, London: Printed for W. Innys at the West-End of St. Paul’s, 1743, pp. 252-3

Full citation:
A general system of surgery in three parts. Containing the doctrine and management I. Of wounds, fractures, luxations, tumours, and ulcers, of all kinds. II. Of the several operations performed on all parts of the body. III. Of the several bandages applied in all operations and disorders.  The whole illustrated with thirty eight copper-plates, exhibiting all the operations, instruments, bandages, and improvements, according to the modern and most approved practice.  To which is prefixed an introduction concerning the nature, origin, progress, and improvements of surgery; which such other preliminaries as are necessary to be known by the younger surgeons. Being a work of thirty years experience. Translated into English from the Latin of Dr. Laurence Heister. London: Printed for W. Innys at the West-End of St. Paul’s, 1743