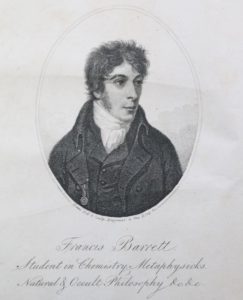 The Magus, or Celestial Intelligencer is Francis Barrett’s compendium of occult knowledge and ceremonial magic.  An important 19th century grimoire, the book remains one of the rarest and most sought after primary sources for those interested in natural magic, magnetism and cabalism.

About its author, we know very little. Most sources put Barrett’s date of birth at 1774, citing a parish register in St. Marylebone, London.  He married and had a son, and the family lived in London where Barrett worked as an apothecary and began compiling The Magus.   He likely trained under physician and astrologer, Ebenezer Sibly, who published his own works on the occult and prepared one of the most important medical works of the 18th century, his edition of Culpeper’s English physician and complete herbal (1789).  Though Sibly was well read in medical and scientific literature, drawing upon both unpublished and esoteric works, he also sought truth in the allegories of the alchemists.  Literary consensus suggests that Barrett was influenced by the astrologer’s penchant for alchemy and eclectic theories, particularly those relating to animal magnetism. 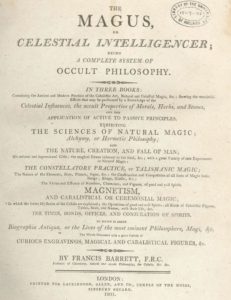 Francis Barrett’s main work, known by its short title, The Magus, or Celestial Intelligencer, included one of the longest title pages of its era.  Its significance at the time was two-fold; not only did it offer an exhaustive list of contents (The Magus was essentially three books in one volume), it also acted as an important medium for Barrett’s self-proclaimed credentials.  As “Professor of chemistry, natural and occult philosophy, the Cabala, &c. &c.” – a declaration for which there still exists no proof- Barrett appeared to have indulged in more than just a little self-aggrandisement.   Bolstering his reputation, at the very least, the pseudo-qualifications seemed an attempt to justify his teaching advertisement, inserted at page 140 of the second book:

“The Author of this Work respectfully informs those who are curious in the studies of Art and Nature, especially of Natural and Occult Philosophy, Chemistry, Astrology &c. &c. that… he gives private instructions and lectures upon any of the above-mentioned Sciences; in the course of which he will discover many curious and rare experiments. Those who become Students will be initiated into the choicest operations of Natural Philosophy, Natural Magic, the Cabala, Chemistry, the Talismanic Art, Hermetic Philosophy, Astrology, Physiognomy, &c. &c…” 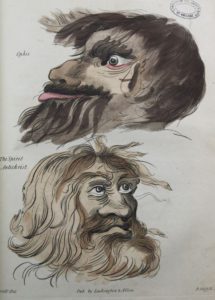 Over the years Barrett has attracted criticism from those who felt The Magus consisted largely of English translations of the German occultist, Heinrich Cornelius Agrippa von Nettesheim’s, Three books of occult philosophy and the Fourth book of occult philosophy, also attributed to Agrippa.  Most now agree that it is a ‘compilation’ of works only, albeit improved by Barrett’s slight modifications and modernised spelling and syntax.  In fact, The Magus, went largely unnoticed until the mid-19th century.  It was not until the 1860s, when the French occult writer, Eliphas Levi, and English novelist, Edward Bulwer-Lytton, who had joined an occult study group where they talked of the book with interest, that others began to embrace it for what it was – a compendium of magic in a very practical vernacular. 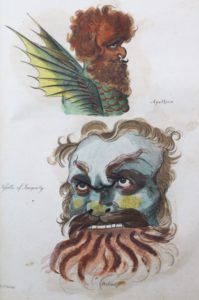 By the late 1800s, The Magus had not only found its market, it had influenced an important paradigm shift.  Magic in England during the Renaissance period had centred around complex rituals, intended to gain control over the natural world; its foundations lay in a resurgence of the writings attributed to Hermes Trismegistus and in Neoplatonic versions of ceremonial magic of the 15th-16th centuries.  There existed three dominant theories which were used to explain how magical effects took place.  The theory of correspondence proposed that nature ‘spoke’ to humankind in a language of mysterious signs, essentially a network of symbols, decipherable by the magician.  The power to perform magical effects relied more on the operation rather than the operator; the magician simply demonstrated the power which already existed in nature.  The second theory, that of spiritual intervention, stated that non-physical agents inhabited creation and could be used by the magician to induce change (good or bad) through will – not their own will but that of God’s.  Lastly, this connection between the theory of correspondence and spiritual intervention, the ‘doctrine of subtle medium’, explained how the physical body was connected to the soul via spiritual links.  These theories, based on the works of ancient authorities, provided the foundation for all magic of the period. Moreover, those who studied and applied magic were highly educated men who practiced alone or in tightly knit heterodox communities, and whose efforts to understand nature were subsequently restricted to institutions such as monasteries.[1] 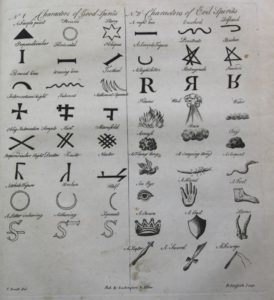 These Hermetic theories continued to form the basis of ceremonial magic well into the 19th century.  Gradually, however, the deciphering of nature’s secrets lost its focus and magicians began to turn their attention toward the concept of personal spirituality.  Symbols, once considered real signs for magical use, were increasingly employed as tools for training the imagination; God the creator was replaced by an independent nature, and the doctrine of subtle medium was transformed into an indeterminate ‘otherworld’ which linked inner and spiritual reality.[2]  Now based on the powers of the psyche, magic enjoyed a whole new approach – traditional techniques morphed into psychological techniques designed to build mystical consciousness. 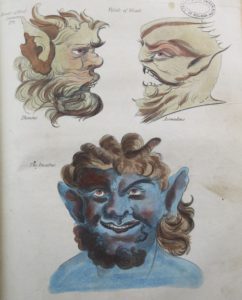 At the forefront of this paradigm shift was The Magus.   As a compilation of carefully selected Western works of aforementioned authors, Barrett’s handbook acted as a hybrid reinterpretation of English magic, written in a very pragmatic way.  It recast theoretical treatises on how magical effects operated in the world into a book on how to actually ‘do’ magic; it was the first modern dissemination of Renaissance magic works, and its text rendered occult learning much more practical and accessible.  As a relatively inexpensive manual, it allowed both men and women of the upper middle class to learn and apply the magic outlined.  They became less inclined to work alone, practicing instead in magical and Masonic lodges and participating in group rituals.  Personal enlightenment was their goal, and Barrett’s remake, aligned more closely with contemporary notions of science and magic, obliged.  In truth, his legacy lay as much in the bringing together, in one volume, of an entire program of occult learning (taking into account his offer of tuition), as it did in reducing the exclusivity of magic knowledge dissemination and thereby inspiring a new generation of occultists and paving the way for movements such as Wicca. 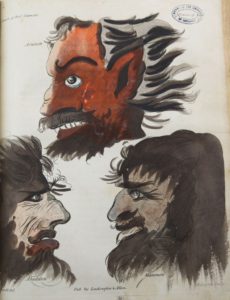 The Magus consisted of three separate books, further divided into multiple parts.  The first book defined natural magic, examined occult operations in animals, minerals and vegetables, and explored the history of alchemy, or the “true secret of the philosopher’s stone.”  The second book considered magnetism and its role in practices such as the curing of wounds.  It discussed Cabalistical magic, in the process uncovering the secret mysteries of the Tables of Cabala, and it analysed divine numbers and dreams, plus much more.  The final book, Biographia Antiqua, was a bibliography of sorts, providing an account of the works and lives of the ancient magicians, as well as an essay “proving that the first Christians were magicians.” The Magus was illustrated with twenty-two plates, six in the first book and sixteen in book two.  Six of these were hand-coloured.  Startling and almost grotesque in their appearance, the engravings of fallen angels, spirits and demons combined perfectly with Barrett’s chosen text; the result – a practical, accessible, inspirational and thoroughly interesting handbook, indicative of a transitional period in English magic.

For those interested in learning more about The Magus and its revival of occultism, Robert Priddle has authored a superb thesis on the topic, More cunning than folk: An analysis of Francis Barrett’s The Magus as indicative of a transitional period of English magic. (2012)

The Magus, or celestial intelligencer; being a complete system of occult philosophy. In three books: containing the ancient and modern practice of cabalistic art, natural and celestial magic, &c.; shewing the wonderful effects that may be performed by a knowledge of the celestial influences, the occult properties of metals, herbs, and stones, and the application of active to passive principles. Exhibiting  the sciences of natural magic; alchymy, or hermetic philosophy; also the nature, creation, an fall of man; his natural supernatural gifts; the magical power inherent in the soul, &c.; with a great variety of rare experiments in natural magic; the constellatory practice, or talismanic magic; the nature of the elements, stars, planets, signs, &c.; the construction and composition of all sorts of magic seals, image, rings, glasses, &c.; the virtue and efficacy of numbers, characters, and figures, of good and evil spirits. Magnetism, and cabalistical or ceremonial magic; in which the secret mysteries of the cabala are explained; the operations of good and evil spirits; all kinds of cabalistic figures, tables, seals, and names, with their use, &c. The times, bonds, offices, and conjuration of spirits. To which is added Biographia Antiqua, or the lives of the most eminent philosophers, magi, &c. The whole illustrated with a great variety of curious engravings, magical and cabalistical figures, &c. By Francis Barrett, F.R.C. Professor of chemistry, natural and occult philosophy, the cabala, &c. &c. London: Printed for Lackington, Allen, and Co., Temple of the Muses, Finsbury Square. 1801