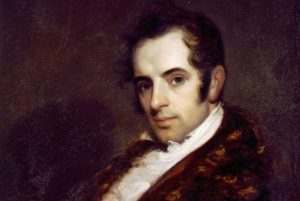 Originally published as five short stories in the American edition of The Sketch Book of Geoffrey Crayon, Gent. (1819-20), Old Christmas is Washington Irving’s later, illustrated version of the work, portraying the good old-fashioned customs of Christmas.

The youngest of eleven children to Scottish parents William and Sara Irving, Washington was born in 1783 after his family had immigrated to America. Settling in Manhattan, New York, the Irvings quickly became part of the city’s lively merchant class. Though Irving developed an early interest in literature, he was reportedly uninterested in school and regularly left class to attend the theatre.[1] At the age of fourteen, the outbreak of yellow fever in Manhattan prompted his parents to send him to stay with friends in Tarrytown, New York. Located near the town of Sleepy Hollow, the place would later become an important source of inspiration for him. 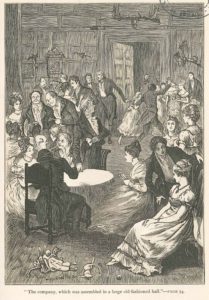 By the age of nineteen, Irving had begun submitting commentaries to the New York Morning Chronicle on the city’s theatre and social scene, under the pseudonym ‘Jonathan Oldstyle’. It was the first of several pseudonyms he would use, and the articles brought him a degree of early fame. By 1807 Irving had established, with his brother William, the literary magazine Salmagundi. In it, he poked fun at New York politics and culture, again using pseudonyms such as William Wizard and Launcelot Langstaff, all the while continuing to build his reputation as a short story writer. In its seventeenth issue he used the name “Gotham”, meaning in Old English ‘a homestead where goats are kept’, to describe New York City. The nickname stuck, and has since found its way into many a comic and movie, the most notable being Batman. 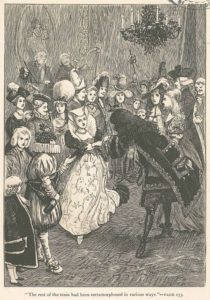 Irving had a wicked sense of humour and in 1809 he put it to good use promoting his first major book. A history of New York from the Beginning of the World to the End of the Dutch Dynasty (1809), was a satire on local history and politics, written under his next pseudonym, Diedrich Knickerbocker. Just prior to its publication, Irving started a hoax, placing several missing person advertisements in New York newspapers seeking information about ‘Diedrich Knickerbocker’, a crusty Dutch historian who had allegedly gone missing from his city hotel.[2] Continuing with the prank, he placed a notice, purporting to be the from the hotel proprietor, advising readers that if Mr Knickerbocker refused to return to the hotel to pay his bill, he would publish a manuscript Knickerbocker had left behind. Unsuspecting readers followed Knickerbocker’s story with growing interest. Concerned city officials even considered offering a reward for information about the missing Dutch historian.[3] Irving rode the wave of public curiosity with delight and in December 1809 published A History of New York… under his newly adopted pseudonym, Diedrich Knickerbocker. It was an instant success. 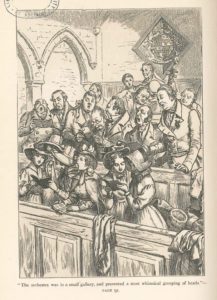 Just three years later, the War of 1812 began and it had a profound impact on Irving. For many American merchants, his family included, it was disastrous. By 1815, he had left for England in an attempt to salvage the family trading company. He spent the next two years trying, in vain, to bail out the firm financially but eventually had to declare bankruptcy; with little in the way of job prospects, he stayed on and resumed writing. He remained in Europe for the next seventeen years, during which he produced some of his best work. In 1819, he sent a set of short stories to his brother in New York, asking him to publish them as The Sketch Book of Geoffrey Crayon, Gent. Among them was “Rip Van Winkle”. Published in the first instalment, it was immediately popular; so too were his other stories. “The Legend of Sleepy Hollow”, inspired by Irving’s earlier stay at Tarrytown near the quaint village of Sleepy Hollow, with its history of local ghost stories, was published in the sixth instalment. In total, The Sketch Book… contained thirty-four essays and short stories, published serially throughout 1819-20 – as seven instalments in the American edition and as a two-volume set in England. From a literary standpoint, the book was significant, for its contents have often been cited as the earliest examples of the genre we now know as the ‘short story’.[4] It also marked the first use of Irving’s pseudonym, ‘Geoffrey Crayon’, which he continued to use throughout his career. 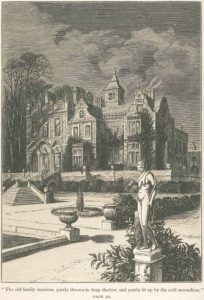 The Sketch Book… also included five stories, published in the fifth instalment (1820), about the English traditions of Christmas. Set at ‘Bracebridge Hall’, a location based loosely on the Holte family’s Jacobean mansion, Aston Hall, the stories recounted the warm-hearted festivities that Irving experienced whilst visiting Abraham Bracebridge, husband of the last member of the Holte family to live there. The first of the stories was simply titled “Christmas”. It in, Irving reflected on the meaning of Christmas, and described the services of the Church as extremely tender and inspiring during the season of Advent, until they broke forth “in full jubilee on the morning that brought peace and good-will…”.[5] He lamented the “havoc made among the hearty old holiday customs” by modern refinement, and wished instead for a return to traditional “games and ceremonials”.[6] The second story, “The stage coach”, saw ‘Crayon’ travel by public coach on Christmas Eve, surrounded by excited children, anticipating their reunion with family and pets. Disembarking at a small village, where he determined to pass the night in the local inn, he was surprised to see a young Frank Bracebridge, with whom he had once travelled. 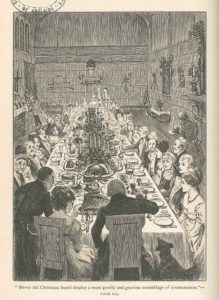 He was invited back to his house, the Bracebridge family mansion, to catch up on old times and enjoy the Christmas festivities. Christmas Eve, also the title of the third story, was passed with much frivolity, the sounds of music and bursts of laughter echoing throughout the building. There were candles “wreathed with greens” and a table abundantly spread with wheat cakes and minced-pies.[7] The fourth story, “Christmas Day”, saw Crayon awake to a choir of small voices, singing at his chamber-door. He mused “Everything conspired to produce kind and happy feelings in this stronghold of old-fashioned hospitality.”[8] He enjoyed family prayers, a breakfast of true old English fare, an erudite sermon on the rites and ceremonies of Christmas, and then dancing back at the mansion. All the while, his “heart seemed over-flowing with generous and happy feelings.”[9] In the fifth and final story, “The Christmas dinner”, Crayon enjoyed a banquet in the great hall, next to a crackling fire. The family prayed, told stories and sang and danced. Everyone was merry. It was in this final instalment that we learnt the true purpose of Irving’s story, as he concluded: “… if I can now and then penetrate through the gathering film of misanthropy, prompt a benevolent view of human nature, and make my reader more in good humour with his fellow beings and himself, surely, surely, I shall not then have written entirely in vain.”[10]

In 1876, these five stories were brought together and published as Old Christmas, a tribute to the memory of Washington Irving. Bound in green cloth, the cover pictorially gilded, the book contained more than 100 festive illustrations designed by Randolph Caldecott and carefully arranged and engraved by J. D. Cooper. The Rare Books & Special Collections copy of Old Christmas is this first edition. It is the only copy to be held by a South Australian library. 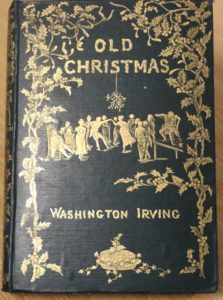 The Sketch Book… solidified Irving’s literary reputation. He became one of the first American writers to earn a living solely by the pen, and his portrayal of old-fashioned celebrations reportedly sparked the revival of Christmas customs, especially in the United States. Likely inspired by his work, the Christmas ‘gift book’, with its short pieces of poetry and prose by well-known authors, also began to emerge as early as 1825. Even British author, Charles Dickens, credited Irving as an influence on his own work, including the 1843 classic, A Christmas Carol.

So, as the festive season approaches and we enjoy many of the customs revived as a result of Irving’s stories, let us celebrate the man who passed away on the night of November 28th, 1859, only eight months after completing the final volume of his namesake’s (George Washington), biography. Under a modest headstone, he rests peacefully in the cemetery at Sleepy Hollow, New York.