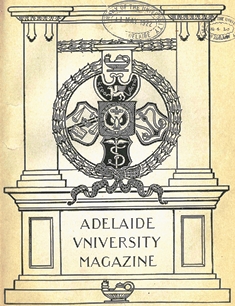 In September 1918 the Adelaide University Magazine was first published. The editorial of the first volume cited the need for a student magazine, to help provide a voice to the students, as well as to encourage a community that many felt the University missed out on due to the lack of residential colleges. It was published by the students and supported with funding brought in from advertisements for Adelaide businesses.

The first few issues of the magazine heavily discussed the ongoing War, with the first few pages always containing a Roll of Honour for the students and staff who had enlisted, followed by Letters from the Front and the occasional article written by or about members from the University community currently serving. Despite the difficult time, the magazine also featured lighthearted stories, anecdotes and poetry, as well as contributions from staff, correspondence, book reviews and reports from the various societies on campus. While majority of the articles are contributed to various pen names, other names are far more familiar, such as Sarah Elizabeth Jackson 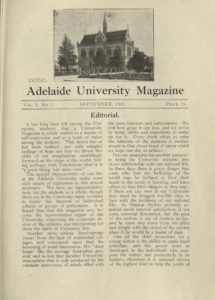 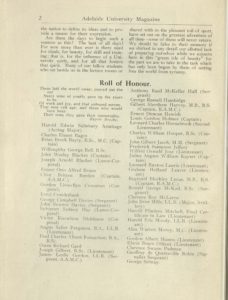 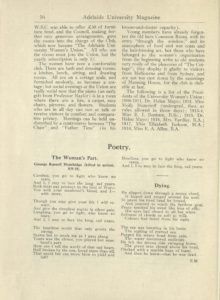 Notably the first editor was a woman, former student Miss Mabel Phyllis Hardy. Mabel had won the Tinline Scholarship in History and the John Howard Clark scholarship in English Literature, and graduated from the University of Adelaide with a BA in 1914, and was at the time working at St. Peter’s College Girls School. She went on to teach at various school around Adelaide, and in 1925 co-founded Stawell School, a private girls school near Mount Lofty, with Patience Hawker. Mabel also help establish the Adelaide Lyceum Club in 1922, an exclusive women’s club, the purpose of which was to aim to help professional women develop and share their interests in subjects like art, music, science and literature. 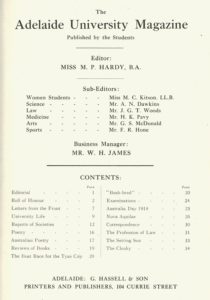 In addition to Mabel as Editor, there were also included 6 Sub-editors, each dedicated to a different area, including one dedicated to Women Students,Miss Mary Cecil Kitson, who had graduated with an L.L.B. in 1916. The remaining sub-editors were all current students, and included Mr Albert Norbert Dawkins (Science), Mr Julian Gordon Tenison Woods (Law), Mr Harold Keith Pavy (Medicine), Mr Gilbert Sherman McDonald (Arts) and Mr Frank Raymond Hone (Sports). The impact of having female voices involved with the editing was obvious with both male and female contributors regularly featured throughout the magazine, and articles keeping a respectful tone towards the female academic population. This was in stark contrast to early issues on On Dit (first published in 1932) which was often highly critical of the women students on campus, and frequently discussed them in a derogatory and often dismissive manner.

Despite the early date, the Adelaide University Magazine was not the first student focussed magazine published in Adelaide, that title being held by the Review, produced by the Adelaide Medical Students Society, and first published in 1889.

To celebrate 100 years of the Adelaide University Magazine, the first volume has been digitised and can be accessed online through our Digital Archive, with more to follow. Over the next few weeks we’ll be sharing more stories and highlights from the magazine both here and on our Social Media. 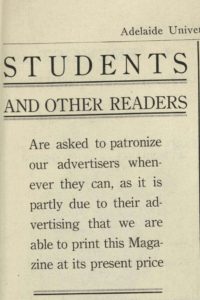 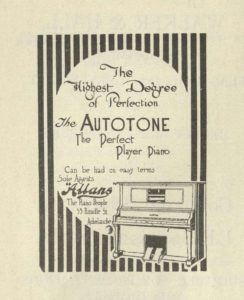 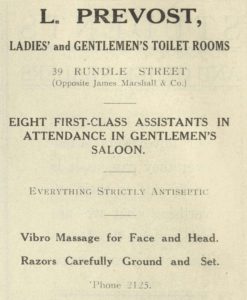 This entry was posted in University of Adelaide and tagged History, Student Magazines. Bookmark the permalink.