Exhibition: God ‘Elp All of Us: The Centenary of Ross & Keith Smith’s Epic Flight 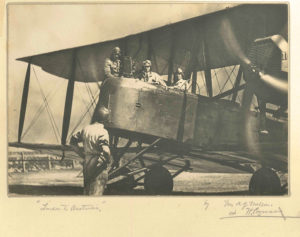 It was to be a great adventure – this skimming through ‘unknown skies’, over strange lands, and vast spaces of oceans. We were attempting something which had never before been done, so it is no wonder we went about our work with eagerness and light hearts.
Ross Smith. God ‘Elp All Of Us, p. 124.

In 1919, the Adelaide brothers Ross and Keith Smith and their two engineers, Jim Bennett and Wally Shiers, won the Australian Government’s prize of £10,000 for the first flight from England to Australia completed in under 30 days.

In the largely untried Vickers Vimy aeroplane GEAOU (dubbed “God ‘Elp All Of Us” by the crew) they completed the dangerous journey in just under 28 days despite lack of instrumentation, makeshift landing strips, poor maps and bad weather, achieved through determination and planning, initiative, courage and a bit of luck.

Their success fostered the realisation that connecting the empire through air travel was practical and promoted the development of the aviation industry within Australia and around the globe.

This pioneering feat is portrayed through photographs and memorabilia from the collection of Sir Ross and Keith Smith held in Rare Books & Special Collections’ manuscripts collection. 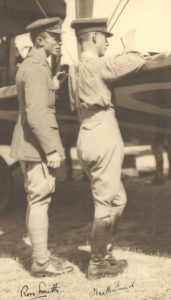 Among the many unique items on display are:

This exhibition is part of South Australia’s History Festival.

This entry was posted in Barr Smith Library, Events, Exhibitions. Bookmark the permalink.