The usefulness of mathematical learning explained and demonstrated: Being mathematical lectures read in the publick schools at the University of Cambridge… Isaac Barrow (1734) 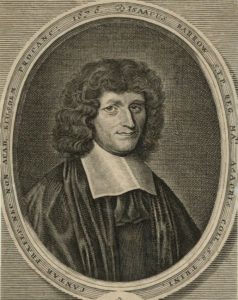 Isaac Barrow, mathematician and Christian theologian, was born to Thomas and Ann Barrow in London in 1630. He is believed to be the only child, surviving at least, of that marriage, with the death of his mother just four years later giving some credence to such reports.[1] Within two years of her passing his father remarried, sending Isaac to live with his grandfather in Cambridgeshire and starting a new family with his second wife, Katherine Oxinden.

Barrow’s education began at the Charterhouse School in London, one of the original ‘Great Nine’ English public schools. Literary accounts suggest that he was quick to quarrel,[2] and his father had supposedly been heard to say that if it pleased God to take any of his children he could best spare Isaac.[3] Perhaps he was simply bored, for his precociousness served him well when he later studied at Felsted. Under the brilliant, leading puritan Headmaster, Martin Holbeach, Barrow thrived, learning Greek, Hebrew, Latin and logic in preparation for University studies. He entered Trinity College, Cambridge, in 1643, earning his bachelor’s degree in 1648 and distinguishing himself in mathematics and classics. By 1652, he’d received an MA from the College and though he became a candidate for the Greek Professorship he travelled abroad instead, spending four years in Italy, France, Symrna and Constantinople. 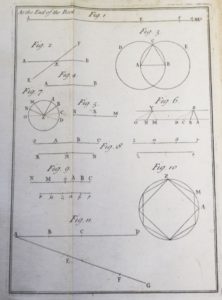 When he returned to England in 1660 he was ordained in the Anglican Church and appointed Professor of Greek at Cambridge. Just two years later, he was also elected Professor of Geometry at Gresham College but resigned both positions upon his election as Cambridge’s Lucasian Professor of Mathematics. During his tenure as Lucasian Chair, Barrow delivered a series of twenty-three lectures on mathematics, Lectiones mathematicae, which he had hoped to publish. He sent the manuscripts to entrepreneur John Collins, in London, but the latter was unable to find a stationer willing to take on the project and Barrow’s work remained unpublished.[4] It was not until 1683, that the lectures made it to publication – the year that Collins died and six years after Barrow’s death. Sadly, the work did not sell well; perhaps, as Whiteside argues, it was due to the fact that the content contained very little that was original, being instead a compilation from the works of ancient philosophers such as Aristotle and Proclus.[5] Whitehead does, at least, concede that Barrow’s themes of the nature of mathematical truth; the complementarity of discrete and continuous magnitudes, and their Euclidean proportion and commensurability were handled “with a distinctive freshness and sparkling wit”.[6] Barrow followed these lectures with a further series on geometry. Published as Lectiones Geometricae in 1670, they were decidedly more technical. They showed, through his investigation of the generations of curves by motion and his recognition of the inverse relationship between integration and differentiation, just how close he came to articulating the fundamental theorem of calculus. His last lecture series, on optics, was delivered in c1670 and later republished as Lectiones opticae et geometricae (1674) with a few minor alternations. Arguably one of Barrow’s most important works, it was here that he made significant contributions to determining image location after reflection or refraction; opened new avenues for the study of astigmatism and caustics, and made new suggestions toward a theory of light and colours.[7]

Though an innovative mathematician and a well-respected teacher, Barrow relinquished his professorship in 1669 in Isaac Newton’s favour. Although Barrow was never Newton’s official tutor, the pair both attended Trinity College and the latter was known to attend Barrow’s lectures. It’s clear that Barrow appreciated the young student’s natural talent, and he encouraged his mathematical pursuits.[8] On resigning from the post, Barrow accepted a position as a royal chaplain in London and, a couple of years later, was made Master of Trinity College. His treatises on mathematics would still prove influential, but it was actually Barrow’s sermons that solidified his place as a literary master. Widely esteemed for his writings on behalf of the Church of England, including A treatise on the Pope’s supremacy: To which is added a discourse concerning the unity of the church and A Brief exposition on the creed, the Lord’s Prayer and Ten Commandments, Barrow’s texts were reprinted well into the 1800s. 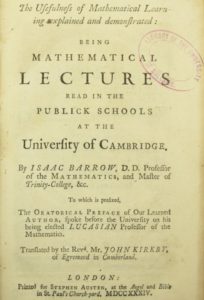 Originally published posthumously in 1685, the Library’s copy of The usefulness of mathematical learning… is Rev. John Kirby’s 1734 translation of Barrow’s set of 23 mathematical lectures delivered at Cambridge between 1664-1666. It includes “The prefatory oration”, Barrow’s inaugural address given at the formal occasion of his appointment as Professor at the University. The lectures within focus on arithmetic and geometry; causality of mathematical demonstration; the nature and division of first principles; composition, divisibility, congruity and equality of magnitudes; homogeneity and heterogeneity of quantities, as well as discussions on the works of ancient philosophers and mathematicians such as Proclus and Euclid. The lectures are eloquently written and clearly reflect Barrow’s efforts to institutionalise and broaden the study of mathematics at Cambridge.

The usefulness of mathematical learning… has recently undergone conservation treatment.  To learn more about this process and to see some interesting “before” and “after” photographs, visit the condition report.