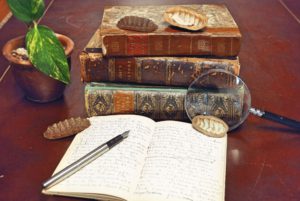 In 2018, drawing on her experience as a History of Science student, intern Kate Corcoran conducted a survey of Rare Book holdings to identify items that would be useful both for teaching purposes and online displays for students. This display presents the results of her survey.

“The history of scientific knowledge and illustration has become an area of increasing interest for study in courses at University.

During my survey, I selected 100 texts according to three main categories. First, there were texts that were representative of the scientific fields of either natural history or medical science. These works were chosen because they were written during significant time periods of the development of these sciences and/or the author was a major figure in the history of this science. Secondly, there were books that were particularly special because they were unique to Australia or very rare with few copies throughout the world. Thirdly, texts that were especially useful for teaching, promoting or showcasing the history of science due to their spectacular illustrations were also selected.

The texts found in my survey include many scientific illustrations. Observational drawing is common in natural history and medical science. According to Gemma Anderson, an artist, scientific researcher and lecturer at the University of Exeter, these illustrations are personal and often more expressive than language. Illustrating necessitates a first-person view of the item being studied. It allows for the comparison between what is observed and what is already known. Drawings offer a unique perspective of objects that during the seventeenth and eighteenth centuries was not possible without the patience of illustration. Through these drawings, the reader can simultaneously observe and compare details of objects.

The scientific naming system still used currently called binominal nomenclature was established by taxonomist Carl Linnaeus and required a precise drawing practice. Linnaeus’ scientific drawings contain detailed information about the natural world. This information would not be presented so concisely if it was expressed in writing rather than illustration. Species cannot be defined properly and classified without knowing what they look like. Illustrations offer this clarity and help with scientific classification. Scientific drawings also provide scope for comparison as knowledge develops over time.”

Extracted from Kate Corcoran’s 2018 Arts Internship Report “Which items in the Barr Smith Library Rare Books & Special Collections are most useful for teaching, promoting and showcasing the history of science?”

This entry was posted in Barr Smith Library, Exhibitions. Bookmark the permalink.