The Great Picnic: 100 years since the Spanish Flu in Adelaide

In 1919 the Spanish Flu finally hit Australia’s shores. The epidemic had originally started in 1918, borne around the world by soldiers returning from WWI. During the course of the outbreak it affected 500 million people and claimed more lives than those killed in the Great War. Also known as ‘pneumonic influenza’, it initially caused symptoms not unlike a typical influenza, but it would eventually cause patient’s lungs to fill with fluid and limit their breathing. Unlike most viruses, it primarily affected healthy young adults with pregnant women being the worst affected.

Jubilee Oval and the University of Adelaide Campus in 1936. Courtesy of University Archives

When the flu came to Australia each state tried to keep it contained, resorting to closing borders and ports and setting up quarantine camps to keep patients isolated from the healthy populations. After the initial outbreaks in New South Wales and then Victoria, South Australia was officially declared infected on the 8th of February. To help manage the influenza, and to keep those who were infected away from other patients, the Jubilee Exhibition Building was converted to an Isolation Hospital. Opened in 1887 the Exhibition Building was built to celebrate the colony’s 50th year as well as Queen Victoria’s Jubilee. After the exhibition, the building continued to be used for a variety of purposes including the Royal Adelaide Show, balls, concerts, exhibitions and events.

Due to the closing of the state borders, many holidaying South Australians found themselves stranded in Victoria.  On the 26th of February 1919, after an extended period of uncertainty, arrangements were finally made for non-infected South Australians to be transported by train from Melbourne to Adelaide. Their destination was the Jubilee Oval, picked as a prime location for a quarantine camp due to its close proximity to the Exhibition Hospital. Jubilee Oval had originally been created in 1895 as a sporting ground, and also hosted parts of the Royal Adelaide Show.

The train carriages were overseen by the Honourable E. A. Anstey, Commissioner of Crown Lands, and his deputy, along with two South Australian nurses who had been in Melbourne. This was to ensure that none of the passengers would attempt to escape the quarantine restrictions. All the passengers were required to sign a declaration before a Justice of the Peace, stating that they had not been exposed to infection prior to leaving Melbourne and that they had taken every precaution to ensure they were not carrying the virus. Breaching the bond would result in a £100 fine (nearly $8,000 today.) 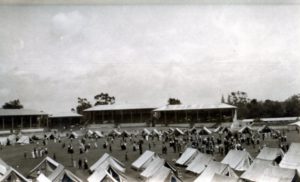 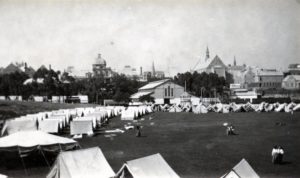 In the lead up to the arrival of the trains, Jubilee Oval was being heavily stocked with supplies under the direction of the Central Board of Health. All up, the oval contained 100 military tents with room for another 500 people under the show annexes. The camp also included a telephone and post office. A letter from Dr Ramsay Smith stated:

“I would suggest no more than two persons in each [tent], unless they be children. The large Machinery Hall will accommodate easily any up to 572 people. Bedsteads, stretchers, mattresses, sheets, blankets, pillows, pillow slips, towels, soap are all provided for each passenger. Lighting, water supply, shower baths, and to some extent plunge baths are all available.”

Upon arrival, the passengers set about making themselves at home, setting up their beds and bedding with the appropriate sensibilities.

“The Machinery Hall, alias the South Australian Hotel, became the chief dormitory for unattached men, the live-stock show hall being set apart for unattached women.” Families, elderly ladies and people with children were set up in the tents. 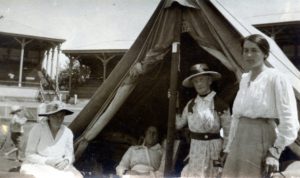 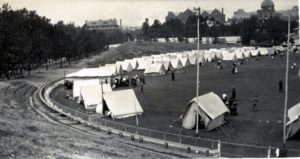 While the outside world viewed the camp in a negative light, pitying the “detanues,” those on in the inside had a very different view. Referred to as “the Great Picnic” the residents set about making themselves as comfortable and entertained as possible. People on the outside sent parcels of tinned fruit, soup and “grapes by the hundredweight” as well as beds, stretchers, and tables.

“We remained ‘normal’ in temperature, temperament, humour, good fellowship, and desire to render such service as we were capable of to our neighbours. If there was one infectious thing in the camp it was the doctor’s smile.”

Committees were set up covering health, housing, sanitation, entertainments and presentations among others. Each day was filled with sports, games, concerts and poetry, as well as daily check-ups by Dr Alexander Krakowsky and the nurses.

“The daily routine was soon well established – bath breakfast, thermometer drill for women, committee meetings for the few, spraying of tents and removal of dust-bins, dinner at 12.30 or 1.30, cricket, thermometer drill for men, afternoon tea-parties, tea at 6 or 7, and the concert, or less public entertainment in the evening.”

The final night featured a concert and ceremony, with “speeches to Mr. Anstey, cheers for the doctor, prizes for the poets, and votes of thanks to Miss Cook, Miss Oldham, Mr Griffith and Mr. Heaton.” 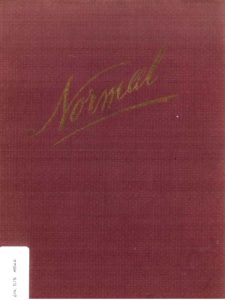 The cover of ‘Normal’ Courtesy of the National Library of Australia

They were released on the 4th of March, though many lamented this after having such a wonderful time. After the release, a small group put together a booklet titled ‘Normal: souvenir of the quarantine camp, Jubilee Oval, Adelaide, Feb. 26th – Mar. 5th, 1919.’ The booklet featured several short essays recounting the experiences of those quarantined, along with many of the poems written and enjoyed. One essay recounted the feelings of returning to their everyday life.

“Alas! thought I, this is a nasty lonely world. I sighed for the comradeship of the Oval, for its familiar tents and familiar faces. Eagerly I walked to the nearest telephone box, to ask Dr Smith to let us all go back to our happy smiling world. My hand was on the knob of the box-door when a cheery voice cried out “Hello! Normal!” I swing round there was one of us. I don’t know his name, but the smile was of the true Oval brand and we gripped hand in the approved movie fashion. I left the telephone alone, and saved my twopence. The world became bright again. For now I know that here in this 440,000 people there may be 339,400 strangers. But at least wherever I go I shall always be sure that by chance I may hear the grand old word ring out. Life becomes an adventure, a great quest for any one of the other 566 smilers”.

At the time in Adelaide there were only 7 patients suffering from the virus. Comparatively in Victoria, influenza had claimed 16 lives, with over 1400 in hospitals.

While the quarantine camp was not revived, the Exhibition Isolation Hospital remained for the rest of the year. In June, the administration and control of the hospital was transferred from the Central Board of Health to the Adelaide Hospital, and in September part of the Old Exhibition Building was officially converted into a permanent isolation hospital with accommodation for 100 patients. Patients in the Jubilee Exhibition Hospital were transferred to the new wards, and the building was fumigated and returned to its original use as an exhibition space.

The Spanish Flu epidemic reportedly took 540 lives in South Australia. Approximately one third of Australia had been infected, with nearly 15,000 people dying to it in under a year.

Both the Oval and the Exhibition Building were taken over by the University of Adelaide in 1925, with the oval space now occupied by the Braggs, Mawson Labs, Benham, Ingkarni Wardli and adjoining buildings. The Exhibition Building was demolished in 1962 and replaced by the Taib Muhmund Court, the Napier Building and the Ligterwood Building.