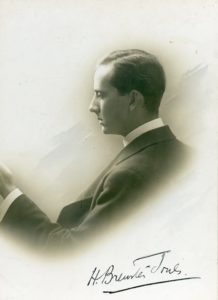 Hooper Brewster Jones has been considered to be one of the most progressive composers in Australia during the 1920s and 1930s. We are delighted to announce that a complete listing of his scores and papers held by the University of Adelaide Rare Books & Special Collections is now available at, https://www.adelaide.edu.au/library/special/mss/brewster_jones/ incorporating the large donation of additional scores donated in 2017 by Ken Jamieson.

Brewster Jones was a musical prodigy, born in 1887 in the tiny settlement of Black Rock at the foot of the Flinders Ranges. He was taught music by his country schoolmaster father, before gaining a scholarship at the age of fourteen to study at the Elder Conservatorium. One of the most precious items in our collection is a frail hand-written programme for the

“Bute Choral Society … Entertainment in aid of the Local Cricket Club on Friday Nov. 20 1896 in the Willamulka Schoolroom. Overture by Master Brewster and Miss Rebee Jones.”

The Elder Music Scholarship enabled his further study in composition, chamber music and piano at the Royal College of Music, London. He returned to Adelaide in 1909 to teach and play recitals and with chamber groups and visiting musicians. In 1915 he began to conduct orchestral concerts, and then formed the Brewster Jones Symphony Orchestra at Queen’s Hall which was South Australia’s only symphony orchestra which continued during World War I.

His creative output peaked in the 1920s with numerous original and experimental compositions for piano, chamber groups and orchestras. His love of nature produced compositions of over 70 Bird Calls (many recorded on bush trips with Hans Heysen or at the Heysen property), 22 Horse Rhythms and numerous Nature Preludes. He was adventurous and produced “unacademic” works based on popular dances and nursery rhymes, and works for the stage such as the comic opera ‘The Belle of Cairo.’ 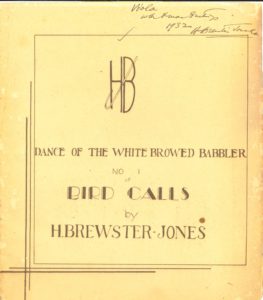 Among the many Bird Call scores are several somewhat crudely printed lithographically. Hans Heysen certainly had a small lithographic press he used to proof his plates (Hans Heysen: the creative journey / Julie Robinson. 1992.) Perhaps Brewster Jones printed some of his scores on Heysen’s press!

In the early 1930s Brewster Jones presented a series of lecture broadcasts on the newly established ABC radio station 5CL which introduced Adelaide audiences to both modern music and ancient and exotic music from different cultures. He also acted as music critic for the newspapers and wrote numerous articles on contemporary art and music such as Surrealism, jazz and the innovative Ballets Russes.

Adelaide has always had a conservative reputation, but according to Kate Bowen “It has also, perhaps paradoxically, produced many of Australia’s most challenging and interesting early twentieth-century artistic and literary figures. These include not only [Stella] Bowen herself, but also Margaret Preston, Dorrit Black, Max Harris and the Jindyworobaks. Brewster-Jones takes his place among this group, but should also be understood as belonging to an international cultural field: one of a group of composers who, in the early decades of last century, sought new means of expression.” (On a New Formula p. 43)( 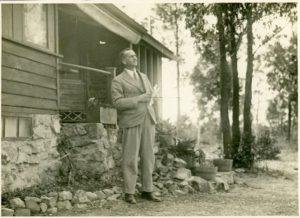 The Brewster Jones papers fit well with our collection of Max Harris Papers and our art and literary works from this creative period.

Kate Bowan ‘…that keen interest we have for the strange and the rare…’: The Radio Broadcasts of Adelaide Composer Hooper Brewster-Jones (1930–1933) JMRO: Journal of Music Research Online Vol. 1 2009 http://www.jmro.org.au/index.php/mca2/article/view/24