Scrapbooks are a personal thing – the place where you keep things that interest or amuse you, of which you are proud or which you have found touching.

On examining Fisher’s cuttings book more closely for an exhibition in late 2019, we discovered some important correspondence as well as mementos of his career and family.

A more complete list is copied below, but significant items include Fisher’s appointment form to Rothamsted Experimental Station from 7th November 1924, and letters of congratulation on The Genetical Theory of Natural Selection from E.B. Poulton, Leonard Darwin and Julian Huxley.

I suspect that Fisher was amused by the letter from Ernest William Barnes, former lecturer at Cambridge and later Bishop of Birmingham, who wrote to Fisher in 1930 complimenting him on The Genetical Theory of Natural Selection but confessing “I did not know who you were.”

A memento of Fisher’s visit to North Carolina in 1936 is typed menu arranged around a Latin square with foods such as
“X1 Randomised cocktail of tropical fruits, with disproportionate frequencies”
and
“X3 Bisque of tomato, an example of a truly homogenous universe with zero tolerance” 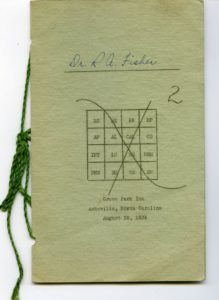 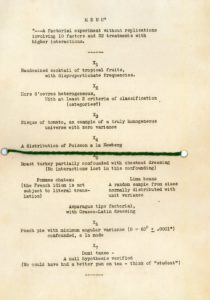 Fisher used to involve his children in his experiments and the cuttings book also includes a charming letter from his young daughter Margaret to “Prof Fisher” telling her father that she “pinned out lots of butterflies but not today” and a handwritten list of the family’s blood types. 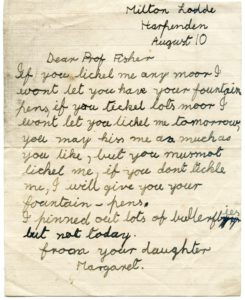 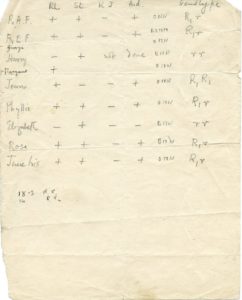 We don’t know if Fisher compiled the scrapbook or if his wife and helpmate ‘Nicolette’ (Eileen) did it for him. The book also contained four letters written Fisher wrote to his wife in 1929 which suggests that she played a greater role in the formulation of Fisher’s theories than has been acknowledged. These letters are transcribed in another blog post.

Items from the cuttings book are available online

Copies of his scientific articles, reviews and work, numerous news clippings (especially re the birthrate and family allowances), and correspondence. Partially indexed.