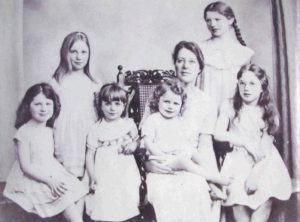 (Ruth) Eileen Guinness was only 17 when she married the much older Fisher on the 26th April, 1917. They were introduced by her older sister, Annie Geraldine, a friend of Fisher’s who he called Gudruna. Fisher liked to give those close to him pet names – hence ‘Gudruna.’ He bestowed Eileen with the name of Nicolette, taken from the old French Romance Aucussin and Nicolette.

The marriage was a love match and Fisher was fortunate to find a partner who was prepared to share his ideal way of life. With Gudruna’s help, the large family established a subsistence farming operation on the Bradfield estate, raising animals, growing their own food and living frugally and without any labour-saving devices. In the evening they would read aloud and have deep conversations. Eileen would also write down his books by hand.

Eileen’s contributions to the development of Fisher’s ideas and theories have perhaps been undervalued. In 2019 the International Biometrics Society Conference was held in Adelaide. While preparing an associated display on Fisher, we discovered four letters written by Fisher to Nicolette in 1929 in Fisher’s Cuttings book (Fisher Papers, Series 24)

The first letter was written from the Dolder Grand Hotel in Zürich where Fisher was attending The Royal Institute of Public Health meeting in May 1929. The letter, transcribed here (to the best of my ability given Fisher’s atrocious handwriting) shows Fisher’s affection for his wife. 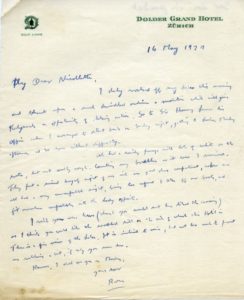 I duly worked off my paper this morning and thrust upon a much dwindled audience a resolution which will give [Kel…?] an opportunity of taking action. So to Sir Henry Lunn his office where I arranged to start back on Sunday night, getting to London Monday afternoon and so home without difficulty.

We had a windy passage with lots of white on the water, but not really rough. Counting my breaths as it were/was, I survived. They put a mixed bag of eight of us into my 2nd class compartment, where we all had a very uncomfortable night, being too refined, to take off my boots, and fit ourselves comfortably [with?] the lady opposite.

I wish you were here (though you would not have had the crossing) as I think you would like the wooded hill on the [?] of which this Hotel is. There is a fine view of the lake. It is inclined to rain, but not too much to prevent us walking a bit, if only you were here.

However, I will see you on Monday,

[Sir Henry Lunn was the founder of Lunn Poly, one of England’s largest travel companies]

The other three letters were written around in 1929 while Fisher was visiting his sister Queenie and her husband Roy at their home in Argyll, Scotland, and during the period when he was refining his dominance theory.

This is all about your dominance theory.

We are going to have the poultry at Rothamsted barring accidents. The proofs of my reply to Wright in the American Naturalist have come and gone. Haldane attacks your theory finely? with ground locusts and Lebistes, and I believe, he could add snails to his army. But they will flee discomfited for I believe your little demon will smite them finely, to his great glory.

It is in the long letter from Argyll written on the 22nd August 1929 that Fisher discusses the development of his dominance theory in detail, finishing with:

How about my dominance modifiers then, which give the least selective advantage of all; is not the evolution of dominance brought ever more completely to a standstill? This I admit for every part of the chromatin, except the part which matters most, namely the duplicated complex itself. Modified or improved duplications will push out the others by slight advantages, that doorway is removed for them. Real evolution goes on in the recessive complex,

How does it fit, sweetheart? I told Haldane he was incautious to say “Fisher’s theory cannot explain …”

Unlike the other letters, which were tucked in the back pocket of the cuttings album, this letter was carefully tipped in on page 30 and annotated with the date and place of writing, perhaps registering its importance in Fisher’s development of his thinking on dominance. 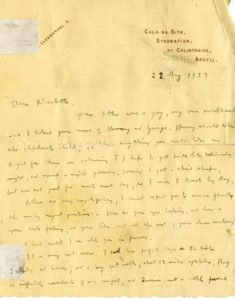 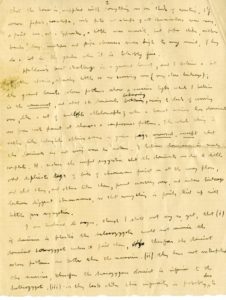 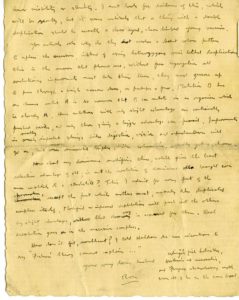 It would seem apparent that Eileen was more than a helpful wife – she formulated ideas of her own and contributed opinions on Fisher’s work.

Eileen Fisher worked hard to support her household under primitive conditions and her husband in his research and his professional frustrations. She also bore nine babies and raised two sons and six daughters. The harsh conditions eventually took their toll on her physical health and Fisher viewed any reluctance to serve his wishes or his comforts as an indication that she did not love him. The marriage ended bitterly at the time when Fisher was appointed as Professor of Genetics at Cambridge in 1943.