The University and the Great War

The University of Adelaide Archives holds a fascinating set of records relating to the military service of University staff and students during the First World War. These include several hundred letters from the families of serving staff, students and graduates in response to a circular from University Registrar Charles Hodge inquiring as to their well-being: 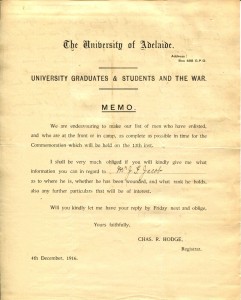 The responses are interesting at several levels. Most obviously there is the raw information about where students, staff and graduates fought – names familiar in military history such as Pozieres, the Somme, Ypres and Gallipoli recur. There is also mention of their passing through local recruitment and training facilities such as Keswick Barracks and Mitcham army camp, and Egypt and Salisbury Plains overseas. The poignant phrase ‘somewhere in France’ can be found, often in inverted commas suggesting that it had already become a widely used expression.  Regiments and battalions are regularly mentioned, as is rank attained and sometimes descriptions – presumably based on letters received – of involvement in military actions. Inevitably there are reports of deaths and injuries – as of December 1916 20 men had been killed and 24 wounded. The War would of course continue for another two years and by its end over 70 men associated with the University had been killed and many more injured, mainly in the brutal war of attrition in the trenches of France and Belgium. 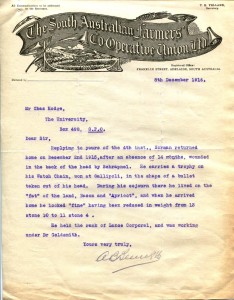 There are some very sad stories to be found in these letters. The Reverend John Blacket of Norwood, for example, writes to the Registrar of his son Captain John W. Blacket: “My boy was killed by a shell in the trenches when in charge of A Company who were being bombarded by the Germans on July 4 1916.” In the same letter Reverend Blacket reports that his other son, Lieutenant Joseph A. Blacket, who like his brother had studied Arts before the War, had been injured in the trenches. He too would be killed, almost two years after his brother in June 1918. 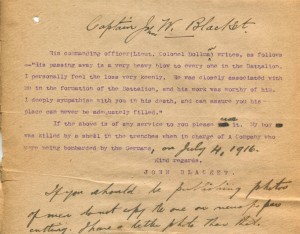 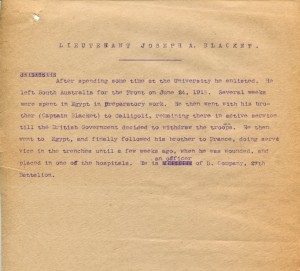 A similar letter comes from Joseph Choat of Clarence Park, and is worth quoting in full:

Your note to hand in reference to my son R.H. Choat. I might state that he enlisted July 1915 in A Company, Private, 32nd Battalion, 8th Infantry Brigade.

Left these shores in November, stationed in Egypt for six months and then was transferred to France, when he last wrote in [sic] July 17th he was well, that [was] the last we heard of him. We are feeling very anxious about him. He has not been reported missing or sick or a prisoner; we have been trying to get tidings of him but up to the present have been unsuccessful. Soon after landing in Egypt he had a slight accident, but was soon back in the trenches again. Two other brothers left with him. One was killed in action on July 20th in France. The other one reported missing on the same date. He has since been reported a prisoner of war in Germany.

Sadly Raymond Hadden Choat was killed along with his 19 year old brother Archibald Percy in Fleurbaix, France, on the 20th of July. It says much about the chaos and relatively poor communications of the era that almost five months after his death Choat’s parents had yet to be informed of his fate. It’s likely that his body was never found and thus his status remained ‘missing’.

There are indications in the correspondence of the way South Australians were thinking about the War – the worldview through which they were processing events and the way in which they were coming to terms with the mounting losses.  Some letters come across as highly nationalistic in tone with mentions of ‘the Hun’ of government propaganda. One is written on a League of Loyal Women letterhead (‘For God and the Empire’). The dominant sense is of pride that sons or husbands were fighting for a worthy cause, namely the preservation of the British Empire as a just and civilising force in the world. 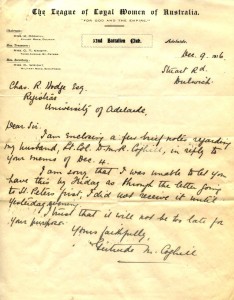 Others voices, however, are more subdued and matter of fact. By this stage there was undoubtedly growing concern among many about the human cost of the War: tens of thousands of Australians had been killed or wounded in Turkey and France by the end of 1916, and stories of the horrors of trench warfare were beginning to emerge. The Gallipoli campaign of the previous year was a bloody failure and in October 1916 the first closely contested conscription referendum had been a socially divisive issue. There is mention of a ‘nervous breakdown’ in one letter, a relatively new expression that suggests a dawning awareness of the psychological damage that could be done by extended exposure to extreme violence.

We can find other evidence of the social experience of the War in South Australia in references in the letters to the Anglicisation of German names, a response by some people of German heritage to anti-German feeling.  Albert Carl Schmelzkopf, for example, became Albert Carl South, and Oscar Arnold Plotz changed his name to Oscar Arnold. One letter from the father of Leopold von Bertouch states specifically that he is of Danish descent. R.P.A von Bertouch, a lawyer, goes on to say for good measure that his son ‘is a nephew of the Premier (Hon Crawford Vaughan) and the Attorney General (Hon J.H. Vaughan)’. From another perspective, the handwriting and manner of expression used tells us something about the level of education of the soldiers’ relatives. Similarly, socioeconomic status is indicated by titles, addresses and letterheads. Some of the messages have been sent on company stationary with logos – The Castle Salt Cooperative Company, The South Australian Farmers Cooperative Union, Gard Brothers Motor and Cycle Merchants – and these are in themselves intriguing.

A description of University of Adelaide Archives Series 73, including lists of those staff, students and graduates mentioned in the correspondence, can be viewed here.

A  further selection of letters can be found here.

This entry was posted in Community engagement, Staff / governance, Students / graduates and tagged World War I. Bookmark the permalink.