1985 marked the centenary of the graduation of Edith Emily Dornwell, the University of Adelaide’s first woman graduate. Dornwell’s admittance to the degree of Bachelor of Science was notable as the University was second only to the University of London to grant degrees to women. The inclusion of a clause in the Royal Letters Patent allowing the University to confer degrees on women was the result of the persistent lobbying of Queen Victoria’s representatives in London by a progressive University Council. 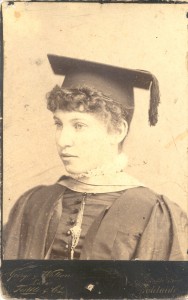 Edith Dornwell’s academic record was an undeniably impressive one – she was placed in the first class, regularly ahead of her mainly male counterparts, throughout her degree.  The Register newspaper of December 10th 1885 commented on matriculation (entrance) exams that:

‘It may be noticed here that the female candidates for matriculation secured a far greater proportion of passes than the male….[T]hat some of these ladies proceed with their University course may be seen from the class lists which we publish this morning. Miss Dornwell has achieved the distinction of being not only the first girl graduate of the University of Adelaide but also the first B. Sc. …The lady in question has not only secured her degree but has gained it with high honours. We congratulate her on her success , and the University on having so soon in its history the opportunity of conferring a degree on a member of the gentler sex who is so well qualified to bear it with credit.’  [UAA Series 163, vol. 2, 1884-1889, p. 61] 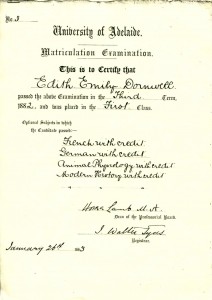 The Register was echoed on the 16th of December by Chancellor of the University, Samuel Way, who said in his Commemoration Day speech:

‘In your distinguished undergraduate career, and in the manner in which you have taken that degree you have not merely done honour to the University, but you have vindicated the right of your sex to compete, and to compete on equal terms, with other undergraduates for the honours and distinctions of the University.’ [UAA Series 163, vol. 2, 1884-1889, p. 65]

Relatively little is known of Dornwell’s life after her graduation. She was clearly keen to continue her studies – University correspondence from February 1886 has her asking the Registrar for an exemption from the first year of a Bachelor of Arts course on the grounds that she completed the same subjects in the course of her Science Degree. Another letter of the same date is a request that she be exempted from lectures during the day due to teaching commitments at the Advanced School for Girls (the school she had attended  as a student three years before): 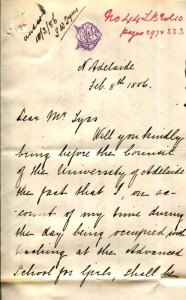 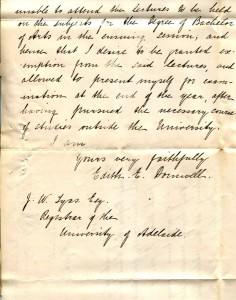 These requests seem to have been granted but there is no record of her having completed a BA, perhaps as her time was taken up as a teacher at the Advanced School . A farewell letter from students on her resignation from the Advanced School in 1887 suggests an energetic and devoted teacher: 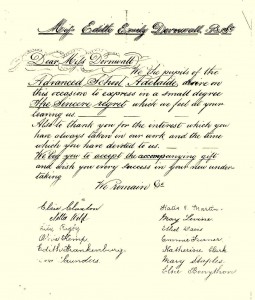 Letter of thanks from former students

Dornwell’s teaching career continued in Melbourne in 1888 at Methodist Ladies College, and in 1890 at Sydney’s Riviere College where she was made headmistress.  In 1891 she applied to be first Principal of the newly established Women’s College at the University of Sydney. The letter of reference below from Accountant and Adelaide School Board member Vinrace Lawrance (‘Telephone No. 124’), reveals something of her character. In particular  she seems to have possessed the talent and tenacity to overcome a far from privileged background in order to take advantage of a uniquely progressive educational environment for women: 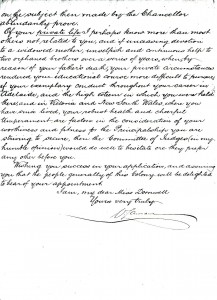 Letter of reference for Dornwell (b) 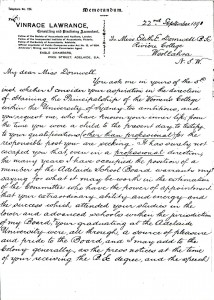 Letter of reference for Dornwell (a)

Although Dornwell failed to obtain the position with Sydney University, her professional career to date had clearly been as successful as her studies. She would no doubt have made an excellent academic or administrator had she not decided in 1893 to marry and have children. For most women there was of course no question of combining professional employment with raising a family during this era. In any case, her husband’s work took them to Fiji where teaching opportunities at the level to which she had become accustomed were likely non-existent.

In addition to the centenary of Dornwell’s graduation, 1985 also saw the climax at the University of a campaign to retain funding for the recently established Research Centre for Women’s Studies (RCWS). The RCWS was the first of its kind in Australia and the campaign to secure financial certainty for the Centre was explicitly linked by supporters to the 100th anniversary of another Australian first in the graduation of Dornwell: 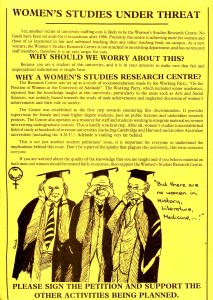 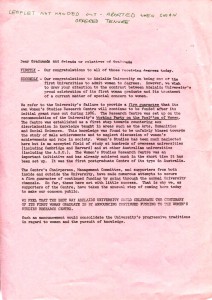 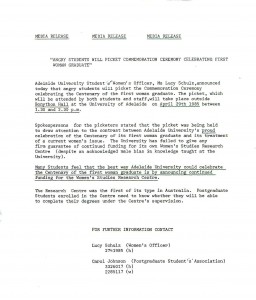 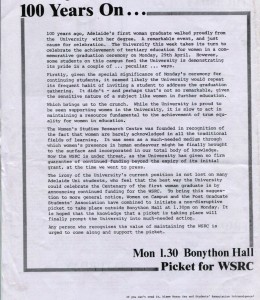 ‘In relation to their proportion of the population, women are under-represented in both the staff and student sectors of the University of Adelaide – in 1981 they account for 13.5% of  the academic staff and 38% of the students. According to figures…these proportions place this University among those in which women are under-represented most severely….’ The report concluded that ‘We have seen no evidence to suggest that this scenario will change in the near future unless positive action is taken.’ 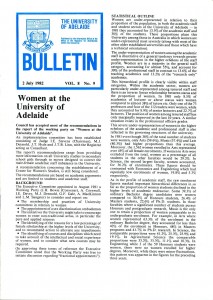 Along with a with a number of anti-discrimination measures, the working party recommended the funding of a ‘postgraduate Centre for Women’s Studies’ that would ‘promote and encourage research concerning and focussed upon women and would operate as an intellectual resource centre those departments wishing to incorporate relevant material into their courses.’ The result was the formal establishment in late 1982 of the Research Centre for Women’s Studies and the appointment  of Dr. Susan Magarey a year later by the Centre’s Management Committee.  Dr. Magarey, who completed her undergraduate  and Honours degree at the University of Adelaide, was recruited from the Australian National University where she had received her PhD in 1976 and since 1978 had been  Lecturer-in-charge of  the innovative and successful Women’s Studies Program.

The robust feminist philosophy underpinning the RCWS was set out in an early statement put out by the Centre.  Headed with a quotation from Simone de Beauvoir  ( ‘Men have described the world from their own point of view which they have confused with absolute truth’) it went on:

‘The women’s movement’s protest against a patriarchal ordering of gender relations has generated among scholars the perception that all of our learning is androcentric. That does not mean only that women have been absent from the descriptions and analyses of social formation, or that women appear as unimportant in accounts and examinations of how the world may be seen. It does mean that. But it means, as well, that that androcentric analyses have produced accounts and perceptions which are substantially inaccurate. Research in Women’s Studies seeks not only to redress the imbalance in our knowledge, but  also to ask questions about the whole social formation instead of about halves masquerading as wholes, to examine critical insights for gender-blindness, to challenge the gender-based priorities governing the processes by which knowledge has been divided and categorised’ (UAA , S. 1474, Item 6).

Further information on the RCWS was provided in an early brochure: 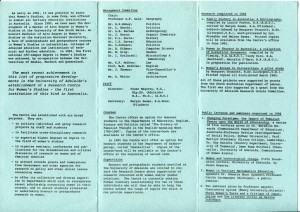 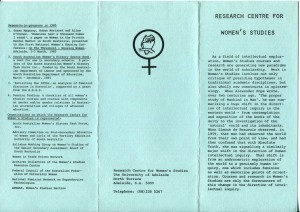 There was of course reaction from those who misunderstood, felt threatened by or  fundamentally disagreed with the perspectives of the RCWS and feminism in general. A witty but nonetheless indicative example of the kind of  response elicited by the promotion of gender equality is a verse collected in the RCWS papers. It was apparently provoked by attempts by the female Chair of Roseworthy Agricultural College’s Equal Opportunities Advisory Committee to put up for discussion the ‘aggressive masculinity’ of the naming of wheat varieties (‘tomahawk’, ‘spear’, ‘bayonet’ etc.) after receiving complaints from Royal Show visitors:

E.O. (or The Mother Goddess)

To be continued in part two.