Between early 1917 and late 1918 Douglas Mawson sent several revealing letters to the University outlining his situation and his perspective on the bloody European war, by then into its third and fourth years. After being disappointed in 1916 at what he felt was his failure to find a suitable research role in the war effort, he seemed by early 1917 to have found a renewed enthusiasm for his work in England with his appointment as ‘research and intelligence officer to the Explosives section of Russian [Military] Commission’. A cablegram sent in mid-February 1917 to request a further year’s leave mentions ‘the present crisis here’, possibly a reference to the growing unrest in Russia that in a matter of weeks led to the abdication of Tsar Nicholas II: 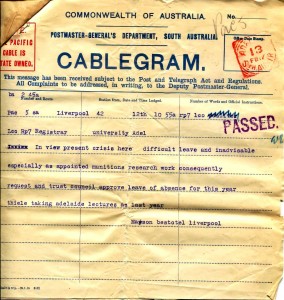 Oddly enough, Mawson’s next letter (Series 200, 1917/383) was written only weeks before the second 1917 (October) Revolution in which the Bolsheviks seized power from the ineffective Provisional Government.  On October 3 Mawson wrote to University Registrar Charles Hodge: ‘Being in daily touch with Russian officers in regular communication by courier with Petrograd I hear all that is going on over there. It struck me therefore as you in Australia must be rather in the dark as to the nature of the revolutionary aims in Russia, that I would do well to summarise the situation.’ 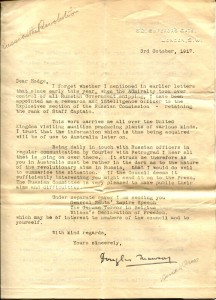 In addition to an overview of the array of political factions competing  for influence in the Provision Government – from the Monarchists and Octobrists on the right to the ‘Social Revolutionaries’ and ‘Extreme Socialists’ on the left – Mawson made the point that the War would have been over had the February Revolution not derailed the Russian campaign on the eastern front. He also stated that Germany was behind the destabilizing emergence of Lenin and the Bolsheviks as a political force:

The months have dragged on and, at the moment of writing, the internal state of Russia is still as unsatisfactory as ever. The Soviet or Council of Soldiers’  delegates is dominated by the Bolsheviks – or maximalist wing of the Social Democratic Party, almost anarchical revolutionaries – and in  turn sways the Provisional Government….Kerensky is nominally in power but only so because he gives way to the Bolsheviks.

There was an undercurrent of frustration here, an early example perhaps of the inscrutability to many in the west of the Russian political culture, and indeed something  that would continue to be a source of misunderstanding and friction for the remainder of the century. ‘The fertility of ideas in their political outlook’ wrote Mawson ‘is not evidence of a high plane of general mentality. A more educated people, in such a crisis as this, would settle down to either of two issues.’  He continued:  ‘It must always be remembered that the Russian people are not good organisers and they are more theoretical than practical, whereas it is downright hard-headed practical men that are wanted to take the reins of government at a time like the present’. Ironically, it would be little over a month from the time of writing that ‘hard headed practical men’ would take over, but those of the far left in the Bolsheviks rather than Mawson’s preferred option of a ‘military party’.

The timing of Mawson’s next communication to the University was again interesting , the letter being dated October 11 1918, exactly a month before the signing of the Armistice. It was around this time that it had become clear that the stalemate on the Western Front had finally been broken with the success from August of the Hundred Days Offensive and the subsequent retaking of most of France and part of Belgium.

Mawson, who since the October Revolution in Russia had been working with the Commission Internationale de Ravitaillement (International Commission for the Purchase of Supplies)opened his letter to Charles Hodge:  ‘Your letter of July last to hand. At that time we here were in a very tense state for the Boshes still had the lead in France. The ultimate overthrow of the Central Powers has, however, never been doubted in this country, so long as labour remained loyal, for the strength and determination of the U.S.A. was well understood.’ 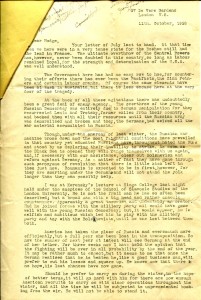 The sense that the tide of the War had definitively turned and that it might soon be over was likely the reason for the timing of Mawson’s letter. The July letter to which he refers was an enquiry as to his intentions regarding the resumption of his teaching responsibilities at the University, from which he had reluctantly been granted a leave of absence by the Council at the end of December 1915. Now that it seemed the War may be over sometime soon Mawson was able to reply:

The burning question is, when can we get back to Australia [?]. My wife is desperately anxious to get back to Patricia (the eldest) who has just returned from San Francisco to Melbourne with her Grandmother, Mrs. Delprat. I am anxious to be settled down where I can carry on my Geological work and help on the Scientific Results of my Expedition. If the war is not over by Christmas it will be by June next. Nothing should keep us from returning next year and I am anxious that it be to commence the first term.

(Mawson gave his address at this time as 37 De Vere Gardens and wrote touchingly, ‘We are living close by Hyde Park and adjacent to the Royal Geographical Society; the one appreciated by the baby Jessica and the other by myself’. )

The bulk of Mawson’s letter, however, was taken up by a fascinating synopsis of the turbulent European political situation as he saw it at this crucial juncture. Mawson felt that the War was likely to be over by the end of the year, an opinion he said he had held since mid-September: ‘It may be rather much to expect, but it seems to me that once the German realises that he is beaten he, like a good business man, will prefer to cut his losses and square up. He knows now that there is no hope, his last chances have now gone’. He argued also that War effort had been undermined by ‘the Pacifists, the Sinn Feiners and certain labour cranks’ and that ‘At the back of these agitations there has undoubtedly been a great deal of enemy agency (i.e. the Germans)’. There is a comment too on the dominance of the newly formed Royal Air Force: ‘All fear of air raids in England has now gone but patrols of our own planes never cease to ply through the sky over London during the night; all anxious to met the foe and demonstrate their superiority.’

On Russia he reiterated his view that Germany was responsible for the Bolsheviks’ now dominant position. The October Revolution, he said, ‘was entirely due to German manipulation for they resurrected Lenin and Trotsky, former exiles from their country, and backed them with all their resources until the Russian army was demoralised…’ He had seen former head of the Provisional Government Alexander Kerensky speak in London on October 10 1918 and suggested that ‘Had he joined forces with the military party all would have gone well with the young Russian democracy; but, it would appear, he is selfish and ambitious which led him to play with the military party and toy with the Bolshevists, until he was lost between them both’.

Educated Russians have, throughout, hated the Huns and stood by us deploring their inability to strike [militarily]. As soon as the Black Sea is opened they will range themselves with us again, and, if necessary with our assistance, clear out Bolshevism and reform against Germany. As a matter of fact they have gone through such paroxysms of revolution that there is little kick left in them just now.

Mawson offered his perspective on Australia’s role in the conflict: ‘The Australian Battalions, though wretchedly depleted in numbers, have done splendidly all through this year’. He went on to make reference to University colleagues Edward Clark, Herbert Gartrell, and Cecil Madigan who were also fighting in various capacities. He mentioned too Billy Hughes’ good reception on his second (from June 1918) visit to London and his ongoing contact with the Prime Minister regarding ‘water-power possibilities’ and the post-War annexation of ‘New Caledonia and Dutch New Guinea by exchanges during the war settlement’. (On this he seems to have anticipated, if not influenced, Hughes’ controversial stance at the Paris Peace Conference.)

Lastly Mawson argued that large expenditures of public money is to be expected during war time, but that the biggest waste was ‘is attributable to the absence of conscription the day that war broke out. In stating that ‘[n]o nation should attempt war unless under conscription; it is the true democratic spirit’ he was in agreement with the Prime Minister, but not the majority of the Australian population who twice voted against compulsory military service.

Comments such as these and other reveal a political conservative – he was certainly no leftist. At the same time he was naturally enough strongly in favour of government investment in areas such as science and education, indeed in science education. His handwritten postscript reads, in part: ‘I have sent to you copies of two publications of Education Commissions over here – the importance of Science and the importance of modern languages is emphasised. This country has never spend as much on education and science as now – big programs are laid for the future – from what you say Australia mush be taking the opposite attitude. D.M.’ 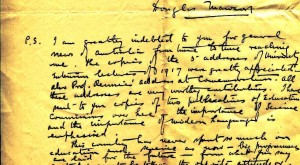 This correspondence, then, provides a fascinating perspective on the era, in particular the emergence of the Communist regime in Russia that would do so much to define the geopolitical contours of the world for much of the twentieth century.

As an afterword, Mawson’s last letter to the University during this period had him clearly relieved to be returning to Australia but somewhat concerned about the behaviour of demobilised Australian soldiers: ‘It is certainly most important that all Australian soldiers be returned without a moment’s delay – for the ruck [?] of Australians cannot stand inaction. One hears from all sides that a serious position is developing in France where several thousands of Australians have actually deserted and are making trouble up & down the country side.’

Digital copies of all of Mawson’s correspondence from this era can be found here.