How to Fold Spacetime, Convert Waste, and Build a Nuclear Fueled Rocket….

One of the rewarding aspects of archival work is the accidental discoveries that occur from time to time. For instance, in the course of a recent reference enquiry related the visit of Nobel Prize winning physicist Paul Dirac to the University in the mid 1970s, I came across in a collection of Physics Department correspondence (Series 984) a number of letters written to the University by a young man called Andrew Hannaford.

The large handwriting of someone of perhaps 11 or 12 stood out from the formal, typewritten material that made up the bulk of the Department’s 1976 correspondence. Curious, I was delighted to find Andrew’s carefully written explanations of a number of his invention – among them instructions for the construction of a nuclear powered rocket, details of ‘a way to make a machine which can make waste materials into useful materials’ using high energy particles, and, most ambitiously, a technique ‘to get men to far off galaxies in a matter of minutes. 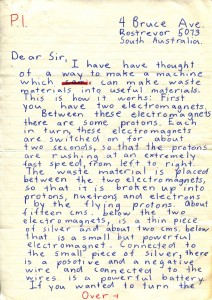 Andrew was clearly a precocious and imaginative young fellow, likely immersed in the space race inspired popular science of the era, and doubtless an avid follower of Dr. Who and other science fiction series. Two of Andrew’s three letters to the University have been preserved with copies of the responses from physics lecturer (now Professor) Dr. Roger Clay. 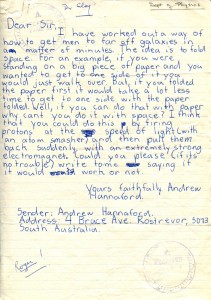 Andrew Hannaford’s messages were sent directly to the University and passed through Registrar A.E. Shields’ office. They were obviously a source of some interest and certainly a diverting variation on the usual administrative and academic correspondence. A forwarding note attached to one has ‘Who was the academic in charge of replying to the Hannaford correspondence, please?’ Someone else has added ‘Obviously a matter for the Chairman’. 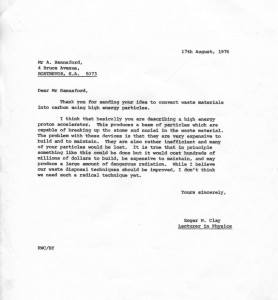 To the University’s credit, Andrew’s letters received courteous and considered responses (addressed to ‘Mr. Hannaford’). Hopefully he wasn’t too disappointed by Dr. Clay’s reservations about the practical aspects of his ideas/inventions – the possibility ‘that a large area would be contaminated with radioactive material’ should his rocket crash, the ‘hundreds of millions of dollars required to build a high energy particle accelerator’, and the assertion that whilst ‘it is certainly possible to locally distort space-time….the effect is so very small that in the situation that interests you it would be quite negligible.’

The remainder of the Hannaford correspondence can be found here.

This entry was posted in Community engagement. Bookmark the permalink.