In 1926 the University of Adelaide received from fellow institutions around the world a number of messages of congratulation on its 50th anniversary. One of the most notable was from the recently established Hebrew University of Jerusalem. The script is in Latin and Hebrew and contains the signatures of Board of Governors representatives Albert Einstein and chemist (and later first President of Israel) Chaim Weitzmann: 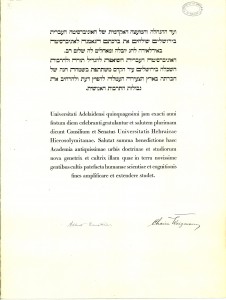 The following translation of the Hebrew script was kindly provided by Associate Professor Ziva Shavitsky of The Centre for Jewish History and Culture, University of Melbourne:

The Administration Council and the Senate of the Hebrew University in  Jerusalem send   their sincere congratulation to the University of Adelaide on the occasion  of its anniversary and wish it very well.

The Hebrew University that aspires to enrich learning and to increase understanding in Jerusalem, the ancient city, joins gladly in the  celebration of its sister institution in the young land, which labours  to spread knowledge and to extend the borders of human culture.

Out of curiosity a member of the Archives volunteer group asked a friend of hers who is skilled in languages to provide a translation of the Latin. The friend provided the following (without having seen Dr. Shavitsky’s translation):

The Council and Senate of the Hebrew University of Jerusalem congratulate and send warmest greetings to the University of Adelaide on the celebration of its fiftieth anniversary. Our Academy, situated in a most ancient city, itself a new parent and cultivator of teaching and study, salutes with supreme benediction yours, which in a land recently opened up to civilised peoples, seeks to broaden and extend the bounds of human knowledge and science.

Though substantively similar, the reference to ‘civilised peoples’ is an interesting reflection of the assumptions of the era. Nonetheless, an autographed greeting from Albert Einstein, who even in the ‘twenties was world famous for his theories of special and general relativity, was and remains an ornament to the University.

This entry was posted in Ceremonies / celebrations, Community engagement and tagged 50th Jubilee. Bookmark the permalink.