Patrick White and the University of Adelaide Theatre Guild, 1961-1964

“Perhaps there was among the audience the thought that a reactionary Establishment was being beaten on its own ground, that the evening was going to be a triumph of the imagination over mediocrity. So it was.”

Geoffrey Dutton on The Ham Funeral (Quoted by David Marr in Patrick White: A Life). 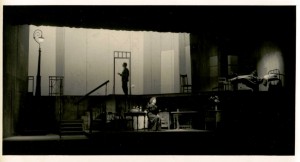 The University Archives recently received a remarkable donation related to University of Adelaide Theatre Guild’s world premiere productions of three Patrick White plays in the early-mid nineteen sixties. The records were collected by Beryl Sheasby (nee Pearce) who was the Theatre Guild’s secretary during the period of the performances of White’s The Ham Funeral (1961), The Season at Sarsaparilla (1962), and Night On Bald Mountain (1964). Included in the series is an original manuscript, publicity material, a number of fascinating photographs, and autographed actors’ copies of scripts. 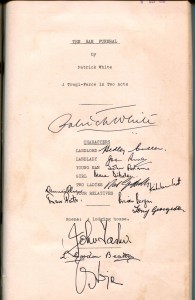 The securing of the rights to the plays and their successful production was a coup for the Theatre Guild. The Ham Funeral in particular garnered national and even international attention, partly due to the fracas surrounding the rejection of the play for the1962 Adelaide Festival of Arts by the Festival’s Board of Governors.  Performed in the newly built Union Hall under the direction of John Tasker, the plays saw the University for a time at the forefront of cultural shift of considerable importance within Australia. As David Marr put it in his biography of White:

Among Australians, the controversy over the play had dragged in many who were hardly interested in the theatre. The Ham Funeral had become a rallying point for those who were unhappy with the boring, official culture of Australia in the late 1950s and early 1960s, and hated the philistine power of the Establishment – the power, especially, to determine what was written and read in a country where books, films and plays continued to be censored and banned. By the time it opened in Adelaide on 15 November 1961, The Ham Funeral was an old play written, for the most part, in another country half a generation earlier, yet the fact of it being staged was like the waving of a banner of revolt. (Marr, 1991, p 394). 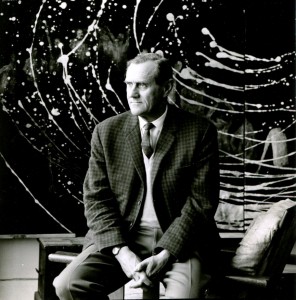 In addition to the manuscripts, autographed scripts, publicity material and photographs, Beryl Sheasby’s collection includes a substantial set of correspondence between key players in the production of Night On Bald Mountain, including White and Tasker.  The letters shed light on practical machinations involved in funding and casting, as well as the zeitgeist. In a letter of July 1963, for example, White writes from Paris to the Guild on his frustration at another of his plays being rejected by the Festival Governors:

To be kicked in the arse for the third time by the philistine Adelaide Establishment is really a bit much. My first reaction was to want to call the whole thing off, but on thinking it over I have changed my mind. If you can put the play on during the Festival, as you say, we must make sure we hit the whole Festival sideways with the production of BALD MOUNTAIN. When we draw their audiences away, perhaps the powers will then realise. However, I must first be sure of certain details. I would only agree if the production takes place at the Union [Hall], because I feel the play needs such a stage and the best possible lighting.

Other letters have White referring to  ‘those bastards of the Establishment’ and ‘Australian puritans’. At this point such attitudes remained more or less confined to an artistic avant garde. Within a few years, however, they would become more mainstream with the emergence of a more open and permissive culture in the 1960s and 1970s. 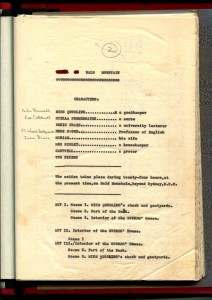 In her history of the Theatre Guild,  As Many Lives as a Cat?, Kerry Round writes of the period:

The relationship between White and Guild members changed during the course of the three productions, influenced no doubt by the acrimony that developed between White and Tasker, and the backstage atmosphere of Bald Mountain was not nearly so congenial as it had been during Ham Funeral.  Opinions on White vary. Many remember him as being ill-at-ease and difficult to talk to. Phil Grummett referred to him as ‘a crotchety old bugger’ who was ‘extremely cynical about a number of aspects of Australian life.’ But others recall him more fondly. For Beryl Pearce it was a ‘wonderful, pleasant and rewarding relationship’, and Wayne Anthoney and Barbara Wast treasure the gifts he gave to them at the finish of the season. (Round, 1999, p. 49)

There is evidence here of both of these aspects of White’s character – the difficult, curmudgeonly side as well as that of the thoughtful gift giver. Several examples of the former can be found in his correspondence with the Guild, including some  quite scathing remarks directed towards the young John Tasker.  On the other hand there are examples of White’s  generosity  in signed copies of his then latest publication, Riders in the Chariot, and a book on Fashion sent to Beryl for the Christmas of 1962. 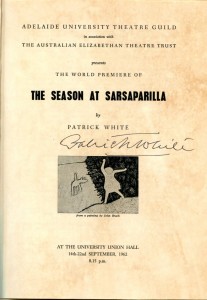 A full listing of the holdings for this series can be found on the University of Adelaide Archives Guide.

A further selection of images can be found in the document library here.