Can you date this photograph?

Rob Linn’s new history of the University of Adelaide, The Spirit of Knowledge, was launched in the Mitchell Building this week.  Beautifully illustrated with numerous archival documents, the book is a lively account of the social, cultural and architectural history of the University’s North Terrace Campus from its beginnings in the 1870s to the present.

To celebrate its publication we are giving away a copy to the first person to guess the date range of the photograph below: 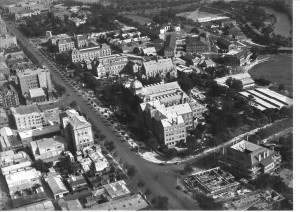 Aerial photograph of the North Terrace Campus circa 19??. From UAA Series 695.

(Click on the image to enlarge or here for a better quality version).

Thanks to the detective work of volunteer Archives researcher and University heritage tour guide Suzanne Layton, we can be sure that the previously undated photograph was taken at some point within a particular two year time span. Send me an email (andrew.cook@adelaide.edu.au) if you think you have an idea of when this was – either year will do – and the first correct entry will receive a book.

The Spirit of Knowledge, published by the Barr Smith Press in hard and soft back, can also be ordered here.

Update: Thanks to everyone who sent in entries. Many were very close but the winning entry was submitted by Ren who reasoned that as the original Barr Smith Library was completed (1932), but that there was no sign of construction on the Bonython Hall site (1934-1936) the photograph was likely taken in 1933.

Another clue is the old building adjacent to the BSL on the verge of the Jubilee oval.  We have reference to this having been removed in late 1933 which suggests the image predates this.

Many entrants rightly pointed out that the RAH Women’s Health Centre was under construction in the picture, and quite reasonably suggested that the date might be 1934. However, the lack of any sign of activity on the Bonython Hall site and the presence of the old Jubilee Oval building next to the new BSL suggest it was slightly earlier than this.

Thanks again to all who took an interest.

This entry was posted in Buildings / grounds and tagged Aerial Photographs, North Terrace. Bookmark the permalink.