A recent post contained a request for information on the identities of a group photograph of 5UV staff  taken in the mid-1970s. John Pryzibilla, who is pictured with the group (in polo neck, next to Keith Conon), generously responded with the following excellent overview. John wrote:

“Pleased to help out. There are some people whose names I can’t recall, but I will do my best. All the people were full-time or part-time staff of the University’s Department of Adult Education (‘DAE for short in this email), or its component radio station 5UV, with the exception of one or two radio station volunteers. 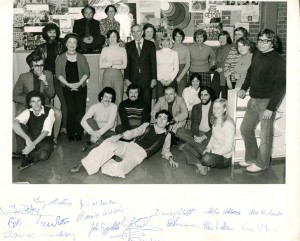 From left to right –

At rear, seated on the filing cabinets:

Jim Warburton (Director, DAE – since retired and, I think, deceased); Gaye Macleod (Senior Producer, 5UV – since moved to Perth, where she made radio with the ABC before setting up “Relocations West”, now retired)

Seated on chair at left:

John also mentioned 5UV’s  first formal Licence Application, which he co-wrote: “That was after the station had been operating for some years. And there was an interesting story about that – when the government introduced formal TV and Radio licensing processes, they published guidelines to the different types of licences.  These included, in the description of ‘educational broadcasting licence’ the words “(e.g. 5UV)” … I spotted this, and we had to point out to them that they should probably remove those words if they really wanted to run us through an approval process, otherwise we would simply be approved by definition! :-)”

Written in 1978, the application is an interesting record of the station in itself, containing the application as well as an extensive appendix which includes program guides, letters from listeners and a number of press cuttings. It is now a part of Archives Series 502, ‘5UV Public Broadcasting Licence Applications’: 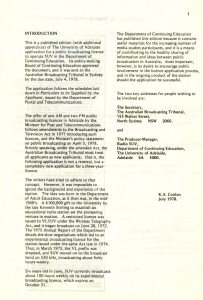 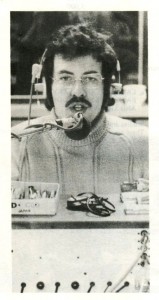 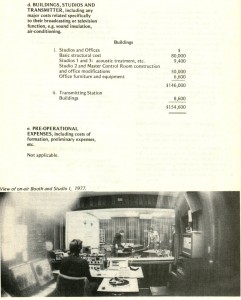 Further images from the licence application can be viewed in the document library here.