In 2009, the University announced the sale of the Munduney and Moralana properties that had been bequeathed to it in 1968 by pastoralist, John Stanley Davies. Upon sale, the Certificates of Title for the properties were released for processing by the National Australia Bank. The eight titles, dating from 1910 to 1950, have now been returned to the University Archives for preservation along with other historic legal documents contained in Series 654. 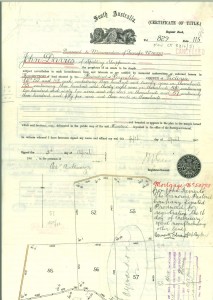 The John Stanley Davies bequest to the University of Adelaide was one of the most significant in its long history.

Edward Davies arrived in South Australia from Wales in 1850. He carted copper from Burra until 1853 when he married and settled on a small farm near Mintaro. In 1869, he bought the first 2,000 acres of land a few miles from the town of Spalding which would eventually grow into the 18,500 acre Munduney (which means ‘beautiful waters’) property. Edward’s son John took over in 1889, and was followed by his eldest son, John Stanley, who inherited the property after his father’s death in 1948.

John Stanley Davies never married and spent his working life developing excellence in the strains of beef cattle. By the judicious introduction of imported animals, he made his stock some of the best available in the land and raised the standard of cattle in many parts of Australia.

Mr Davies passed away on Christmas Day 1968, and Prince Alfred College and the University of Adelaide learned soon after that the two institutions had been bequeathed the $2 million estate on a 1/5 to 4/5 share. It included both Munduney and the 450 square mile pastoral property Moralana, near Hawker. 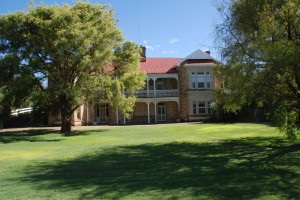 The will directed that the properties be carried on for 20 years and the income used to promote research into improving the quality of cattle, especially beef-producing animals. It also specified that the properties could be sold in 1989, or continued on. Under management of Martindale Holdings, the properties continued to operate until their sale which was undertaken in order to reinvest the proceeds into world-class teaching and research facilities for agriculture and animal science.

Records, photographs, artworks, furniture and artefacts from the Munduney homestead have been retained by the University. Over time, these will be accessioned and added to its archival and heritage collections in order to preserve the memory of one of South Australia’s most generous benefactors, John Stanley Davies.