A wave of radical social criticism swept the university and college campuses of the west from the mid-1960s and the University of Adelaide was no exception. Looking back much of it seems hopelessly utopian, but in the context of the war in Vietnam, the nightmarish possibility of nuclear war and a growing awareness of the ecological destruction being wrought by our growing technological sophistication, a sizable minority of young people saw an alternative form of social organization of one sort or another as the only path to a humane and sustainable future. 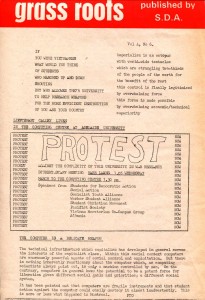 A number of the leaflets and newsletters produced by the University’s radical political groups of the era can be found here. They make interesting reading, particularly in light of the current ‘Occupy’ movement that  shares many of the attitudes and assumptions that defined the counterculture of the 1960s and early 1970s.

This entry was posted in Student life / activism. Bookmark the permalink.