“Is Man Changing the Climate?”

Current political contestation aside, there has emerged in the past decade or so a strong consensus among climate and other scientists that the earth’s climate is rapidly changing as a direct result of human activity.

As a leading research university, Adelaide has been part of global scientific efforts to understand the threat posed by climate change to the biological systems on which we depend. The Environment Institute, for instance, coordinates research groups from across the University in the fields of science, engineering, economics and social science. Part of this is the Climate and Ecology program directed by Professor Barry Brook whose Brave New Climate blog, among other projects, has been internationally acclaimed.

I was curious, then, to find evidence of the discussion of climate change within the University as early as 1975. The following is a draft abstract for the Department of Physics Summer School of that year from atmospheric physicist Dr John Carver. Elder Professor of Physics from 1961 to 1978, Carver’s paper was titled ‘Is Man Changing the Climate’. We can speculate that few at the time would have foreseen this becoming the defining environmental problem of the 21st century: 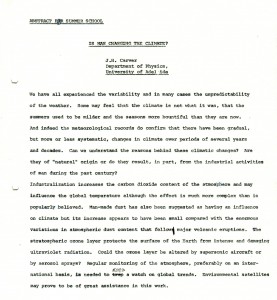 Professor Carver’s suggestions here have been largely substantiated in recent times, and it’s interesting that he mentions damage to the ozone layer by CFCs, a problem that was dealt with on a global scale some time before the more vexing issue of carbon emissions was being serious considered.  His reference to the central role of environmental satellites in measuring changes in atmospheric composition no doubt reflected his pioneering contribution to development of the first Australian launched satellite in the 1960s.

Unfortunately Archives Series 984 (Department of Physics Correspondence) does not contain the full paper. It may, however, be among Professor Carver’s papers which can be  viewed in the Barr Smith Library’s Rare Books & Special Collections.

The University Archives also contains a number of other series related to Physics at the University. Descriptions of these can be viewed on the Guide to Records.