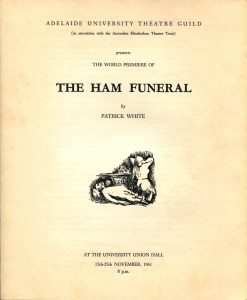 Patrick White would have been 100 this year, and he would no doubt have enjoyed the vindication implicit in The Ham Funeral being reprised in a major production 50 years after its premiere in Adelaide – this time as part of the Festival. The Ham Funeral was controversially rejected for the1962 Festival by a conservative Board of Governors and was instead presented in the Union Hall by the University of Adelaide Theatre Guild. 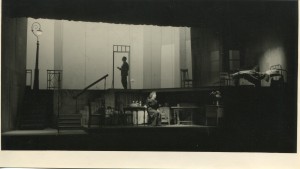 The production was widely acclaimed and White went on to entrust the Theatre Guild with world premiere performances of his subsequent plays The Season at Sarsaparilla (1962), and Night On Bald Mountain (1964). A fascinating collection of records from the Adelaide performances was recently donated to the University of Adelaide Archives by the Theatre Guild’s secretary of the era, Beryl Sheasby (nee Pearce), a selection of which can be viewed here. Beryl was at the social centre of The Ham Funeral and later White productions. Her entertaining evocation of the times has just been added to the State Theatre Company of South Australia’s blog. 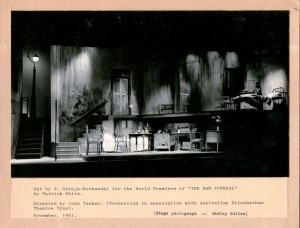 Further background to the play’s latest incarnation is provided by Alison Howard’s recent interview with Dr. Harry Medlin. Dr. Medlin was a long time University of Adelaide teacher and administrator, and as Chairman of the Theatre Guild a key figure in securing Patrick White’s plays for the Guild in the early 1960s. During the conversation Dr. Medlin reflects on the significance of the play (‘it revolutionized Australian theatre’), and his personal relationship with White (‘a funny man….’). And on the initial impact of The Ham Funeral script on he and his wife Didi he says, ‘well you know you’re dealing with deep sentiments, you know you’re dealing with tragedy and tragic farce….It’s soul stirring and for a physicist and a chemist (she was a mathematical chemist, I was a mathematical physicist), for two scientists to read this stuff, the language was magic’. After this first reading, says Dr. Medlin, ‘that was it, we were determined to produce it’. The result was a triumph for all involved, and the beginning of an important chapter in Adelaide’s cultural history.

The State Theatre Company of South Australia’s presentation of The Ham Funeral is playing at the Odeon Theatre throughout March. A preview can be seen here.