We are currently processing a large accession of records from the University’s Law School dating from the sixties, seventies and eighties. Among these I came across a short lived publication called Consumer Forum. 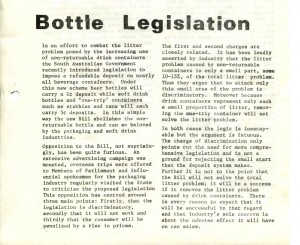 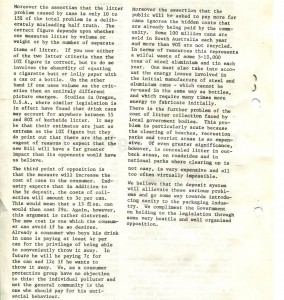 Produced in 1974 from the Law School by a body called the Adelaide University Consumer Protection Group, it was part of a growing consumer rights movement that had recently seen significant success in the legislative reforms by the Labor Government in South Australia. These are summarised on the innovative Australian social and musical history site MILESAGO:

The Dunstan Government was a world pioneer in the field of consumer protection and led the way for the nation. For the first time, statutory guarantees of quality and other protections were provided in consumer transactions. Consumer credit laws overcame many of the injustices of the old hire-purchase system and provided a fair legal structure for the protection of consumers. The used car industry was regulated and legal requirements and warranties were introduced into used car transactions. Similar protective provisions were introduced into a whole range of consumer transactions. Many of Dunstan’s innovations have since been incorporated into the Federal Trade Practices Act.

The first (and apparently only) edition of Consumer Forum carried articles on used car legislation, the new Consumer Credit and Consumer Transactions acts, and revolving charge accounts in department stores. There was also a piece on the then newly introduced beverage container deposit legislation which contains some contemporary resonances. The South Australian deposit scheme was an Australian first and the article noted that ‘opposition to the Bill, not surprisingly, has been quite furious’. It continued:

An extensive advertising campaign was mounted, overseas trips were offered to Members of Parliament and influential spokesmen for the packaging industry regularly visited the state to criticise the proposed legislation. This opposition has centred around three main points: Firstly that legislation is discriminatory, secondly that it will not work and thirdly that the consumer will be penalised by a rise in prices.

Interestingly, these arguments are virtually identical to those vigorously put forward over the past few years by opponents of moves to introduce similar deposit systems in other jurisdictions. See for example the website of the Packaging Stewardship Forum, a lobby group set up by major beverage manufacturers to oppose ongoing attempts by governments to emulate the nearly 40 year old South Australian system.

The Northern Territory Government recently became the only state or territory since South Australia to successfully enact container deposit legislation. Governments other than those of SA and the NT have floated similar schemes but, despite widespread community support, have come up against concerted and well funded campaigns from business groups like the PSF who insist non-regulatory approaches to recycling are more effective.

W.G.K. Duncan, University of Adelaide Professor of History and Political Science made the observation when interviewed in 1955 that “the more things change, the more they remain the same and, if possible, they remain the same for the worse.” As someone privileged to work with archives – the raw material of history – I’m often struck by continuities in human affairs that are too often obscured by the noise and novelty of the present. The above is one small example, more shortly in the form of a selection of news cuttings from University Archives Series 163.

‘Why do some beverage companies oppose a CDS?’, Boomerang Alliance, accessed Feb 2012: