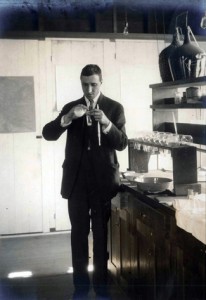 Professor Robertson in the laboratory.

This year’s contribution to South Australia’s History Festival by the Barr Smith Library’s Rare Books & Special Collections and the University Archives is an exhibition on T. Brailsford Robertson.  Robertson was the University’s Professor of Physiology and Biochemistry during the 1920s, as outlined on the About Time website:

Brailsford Robertson was among the most brilliant scholars associated with the University of Adelaide. His pioneering work in the preparation of insulin enabled its first Australian manufacture in the University’s Darling Building. An outstanding researcher and popular teacher, Robertson established the modern discipline of biochemistry and impacted many areas of University life before his early death from influenza.

Robertson was the subject of an earlier blog post which included some of his correspondence with the University, including in relation to insulin production. This month’s exhibition provides a more comprehensive impression of his life with a rich array of letters, notebooks, photographs and other artefacts –  some newly acquired –  brought together for the first time. 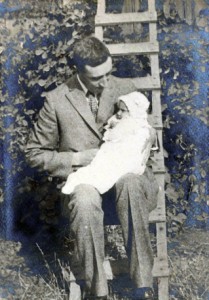 Special Collections Librarian Cheryl Hoskin has divided Robertson’s life and work into various themes including childhood and education; time studying and working in Berkeley and Toronto; establishment of the discipline of biochemistry at Adelaide; his research focus including the production of insulin and growth studies; his role in the design and realisation of the Darling Building; and the impressive number of ‘extracurricular’ activities in which he involved himself. Cheryl has provided narrative snapshots to accompany the many visually fascinating items including childhood books, personal correspondence, references from great scientists such as Jacques Loeb and newly discovered photographs. 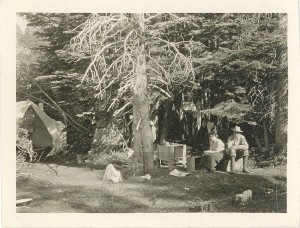 The exhibition is free and continues until early June. It can be seen in the Rare Books & Special Collections foyer on Level  1 of the Barr Smith Library, University of Adelaide.  More details here.