More on Percy Grainger and the University

We’ve had some interesting feedback on the recent Percy Grainger/Rose Grainger Orchestral Fund blog post. Elder Professor of Music Charles Bodman Rae let us know that the Rose Grainger Orchestral Fund, established by Percy Grainger in his mother’s name in 1926, is very much a going concern. The Fund’s capital had become quite depleted but in 2007 was significantly embellished thanks to a substantial endowment from the estate of Kerstin Andersen, a librarian with the Barr Smith Library for over 40 years.

Professor Bodman Rae, who as Dean and Director of the Elder Conservatorium in 2007 oversaw the Andersen bequest, says of the reinvigorated Orchestral Fund:

Without these orchestra-specific endowment funds it would be a struggle – or impossible – to do the following:

a)      Hire the performing materials for contemporary works (ie in copyright) – this is particularly important for EWCO which mainly performs new or recent works. It also enables us to have such hire materials for extended periods (eg three months) rather than the usual short period (eg two weeks)

b)      Engage high-profile soloists to perform concertos (as we did with last Saturday’s ECSO concert, with ASQ leader, Kristian Winther, performing the Brahms Violin Concerto with our students)

c)       Engage professional guest artists to play particular parts for which we might not have a student performer (for example, a prominent harp part, an additional French Horn, or an additional double bass).  These professional ‘extras’ need to be paid for rehearsals as well as the performances.

Over 80 years after its inauguration, then, Percy Grainger’s vision for the Fund in Adelaide continues to be realised. And this at a time when funding for the training of fine music performers is more difficult than ever to come by – see for example the current crisis in the ANU School of Music.

Another welcome response came from Monica Syrette, Assistant Curator of the Grainger Museum and author of the article ‘One Man’s Taste: Percy Grainger’s ‘Aims of the Museum’’.

Monica alerted us to the existence in the Grainger Museum of a number of additional pieces of correspondence between Elder Conservatorium Director and Professor of Music E. Harold Davies and Percy Grainger. These date from the 1920s and 1930s and relate to the transfer of the administration of the Orchestral Fund to the University of Adelaide. 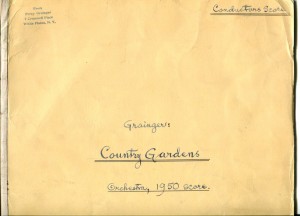 She also provided additional information on Percy Grainger’s ultimately unfulfilled desire to turn ‘Claremont’, his mother’s family home in the suburb of Kensington, into a house museum. This was the subject of a letter Grainger wrote to Professor Davies in 1944 (reproduced in the previous post). Monica notes that Percy had fond memories of he and Rose visiting his grandmother there when he was a child, and that as an adult he went to Claremont to visit his Aunt Clara and Uncle Frank. She continues:

Despite Grainger’s commitment to the concept of turning ‘Claremont ‘into a house museum he was unable to make the necessary arrangements prior to his death. There is correspondence in the collection that outlines issues arising from the widening of East Parade in 1947 and the ongoing maintenance that the house required. In 1956 Grainger financed renovations and leased Claremont to his relatives Bert and Lillian Aldridge. After Grainger died Ella [Grainger’s widow] felt unable to cope with the responsibility of the property and decided to sell Claremont to the couple.

‘Claremont’ was left to Grainger by his mother’s sister Clara Aldridge. I wondered how Grainger’s maternal relatives might have felt about this arrangement, given that Percy, presumably, was considerably better off than them. Monica suggests there was unlikely any resentment: “Grainger was very generous with the Aldridge family. He financially supported his Aunt Clara and Uncle Frank for many years and was very devoted to both of them so it seems unlikely that anyone would have been surprised that Clara left Claremont to him. A detailed history of Claremont, including Grainger’s efforts to turn it into a house museum, would make a fascinating research project.” 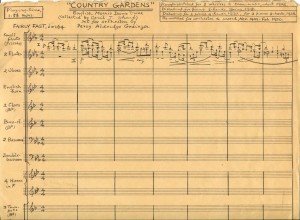 Lastly, in the process of researching Grainger’s relationship to the University of Adelaide I came across an original orchestral score of his most famous piece, ‘Country Gardens’. The 11 page manuscript is dated “February 8-12, 1950, White Plains” (White Plains being his home in New York State). A loose insert contains the score for ‘Middle-Fiddles (Violas)’ and is dated, next to a signature Grainger doodle of a train, ‘Kansas, Feb. 27, 1950’. 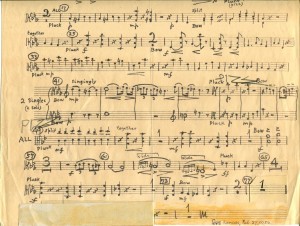 The score is from Archives Series 310, a fascinating collection of papers accumulated by former Elder Music Librarian Dr. Werner Gallusser. We’re not sure exactly how he came upon this piece, whether it was sent by Grainger to the Conservatorium or made it way to Gallusser some other way. Apparently Grainger regularly sent copies of his manuscripts and published music to different libraries around the world. Regardless, the fact that it’s hand written and contains a variety of Grainger’s idiosyncratic annotations (note the ‘dish-up’ history of the piece in the top right hand corner of page 1) makes it a curious document.

Postscript: On comparing our copy of ‘Country Gardens’ with the copies in the Grainger Museum – they are identical – Monica Syrette concluded that our copy is likely a hectograph copy: “As far back as 1908 Grainger was using the hectograph method to copy folk songs he had collected. In fact, he was so keen on the practice that he had a copying machine installed in the basement of his home in White Plains.” The version, says Monica, was an orchestral treatment for a Leopold Stokowski recording and may have been donated by Grainger or by his widow Ella who offered a number of collection items to former Elder Music Librarian Dr. Werner Gallusser in 1962.