From Roseworthy to Spain (and Back Again)

Some time ago our reference archivist Helen Bruce received an inquiry from Moses Dominguez of the Spanish National Library regarding former Roseworthy Agricultural College student Basil Gee. Dominguez is researching the Spanish Civil War and in particular those foreign correspondents who covered the Massacre of Badajoz of August 1936 during which several thousand civilian and military supporters of the Republic were killed by Franco’s Nationalist army. 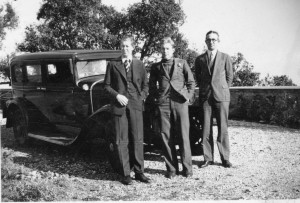 Dominguez had discovered that Gee and his travelling companion Bill Seppelt had by chance been in Spain during the outbreak of the War and had witnessed the initial unrest in Barcelona and Madrid, and later the aftermath of the slaughter in Badajoz. Helen was able to provide some background material on Gee and his time at Roseworthy where in 1933 he was awarded a Diploma of Agriculture. University Archives Series 986,  Roseworthy Agricultural College Photographs & Images,  includes this image of the RAC rifle team with first year student Basil Gee.

We were interested, then, when a few week ago a member of the Roseworthy Archives volunteers group came across Basil Gee’s account of his experiences in Spain. Published in the 1937 edition of Roseworthy’s magazine The Student, the piece describes how he and Bill Seppelt, who was also studying wine-making at the National School of Agriculture in Montpellier, came to be in Spain in mid-1936. 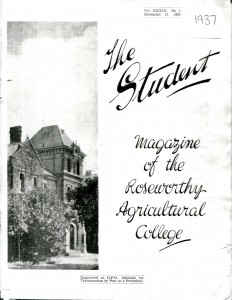 It’s quite a story, written for the most part in the breezy style that characterised the publication. There is no mistaking though that Gee had witnessed something horrendous on his return to Badajoz after the fascist forces had taken the town: “Every hundred yards we came upon looters and search parties, the latter executing all and sundry without even the most summary trial. If a man’s shoulder – or a woman’s for that matter – was bruised from firing a rifle, the whole family was summarily executed… Pretty grim and sordid to see such bestiality.” 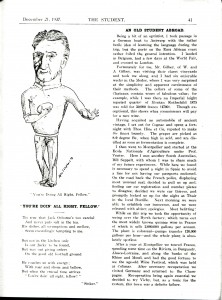 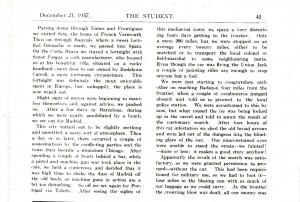 Some of the experiences of Gee and Seppelt were reported in 1936 by local papers based on letters the two had sent to their parents. Interestingly, it was in general the atrocities committed by those on the Republican side that were mentioned, rather than the aftermath of the mass killings described by Gee in his piece in The Student. Even though Australia would shortly be at war with Nazi Germany and fascist Italy (the ideological counterparts of Franco’s Nationalists), perhaps the general perception remained that the left remained the greater threat to European stability than the radical right? A collection of these articles can be read here.

Moses Dominguez has been able to reconstruct the remainder of Gee and Seppelt’s European adventure, partly through an interview with Bill Seppelt’s son. The pair’s car and luggage, the reason for their return to Badajoz following the Nationalist offensive, had been destroyed or stolen – “an all-risk insurance policy is not held valid in times of civil war, riot or revolution”, wrote Gee wryly. Nonetheless they continued their travels through Italy, Russia and Germany for the remainder of 1936 and into the following year. They arrived back in Adelaide in June 1937, lucky to have survived a bomb blast, a shoot-out, and arbitrary detention during the opening phase of one of the bloodiest civil wars of the last century. They returned home, as Basil Gee put it, “sadder, but wiser, men.”

Thank you to Moses Dominguez who alerted us to Basil Gee’s story  and was kind enough to forward a draft of his article on Gee and Bill Seppelt’s experiences in Spain.

Thank you also to the Roseworthy Archives volunteer group whose work in imaging, indexing and various research projects is making the history of the College increasingly accessible. A selection of their work including digitized photographs and graduate listings can be found here.