It’s hard to know quite what University of Adelaide Student Representative Council members might have made of this 1961 missive from University of Detroit Student Council President (and Head Turtle Keeper) Bob Bowen: 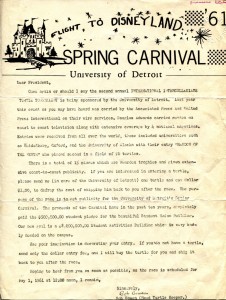 Part of the University of Detroit’s Spring Carnival (equivalent perhaps to our Prosh), the Turtle Tournament was apparently widely publicised across the United States via wire services, network television and magazines.

Whether the Adelaide SRC considered entering a turtle we don’t know. The letter of invitation certainly shows signs of having been passed through a significant number of hands, suggesting it was a source of some amusement. Perhaps the SRC didn’t have a turtle, or a dollar, or there were concerns for the welfare of the poor creature over the 10,000 mile journey to and from the big event? 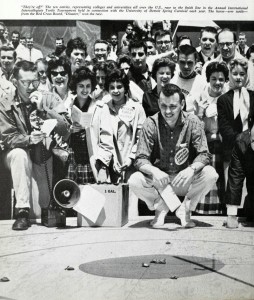 The Tournament, if you’re interested, went ahead as scheduled on May 1, 1961 and was won by a Red Cross Board entrant unpromisingly named ‘Disaster’.  An account of the event can be found in the University of Detroit’s 1961 yearbook, along with a variety of other views of US college life in the first year of the Kennedy Presidency.

Should you wish to contrast the concerns and culture of University of Adelaide students of the era, the fully digitised collection of 1961 On Dit papers are available here.