The University of Adelaide: Pioneering Women’s Right to Higher Education

Gender relations and attitudes towards women have been very much to the fore in the current national political debate. At the centre of course is Australia’s first female Prime Minister. Many would know that Julia Gillard studied with the University of Adelaide between 1979 and 1981, and that it’s here that she first demonstrated a flair for politics.

This is apt given the University’s long history of supporting the right of women to access higher education and to compete on equal terms with men. In 1881, a century before Gillard was elected president of the Adelaide University Union, the University Council was finally successful in persuading the British Government to recommend Queen Victoria put her stamp of approval on the Letters Patent that would recognise degrees conferred on women in Adelaide. In this the University was the first of the Australian colonial universities, and second in the world after the University of London. 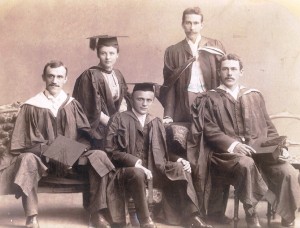 In fact the University of Adelaide can claim a number of Australian firsts in the area of women’s education. From it’s inception in 1874 regulations allowed women to matriculate, enrol and attend classes, ahead of both Melbourne and Sydney by several years. The University also graduated the first females in the areas of science and medicine (Edith Dornwell and Laura Fowler in 1885 and 1891 respectively), the first female doctor of music (Ruby Davy, 1918), and made provision for the election of the first woman to a university governing body (Helen Mayo, 1914). 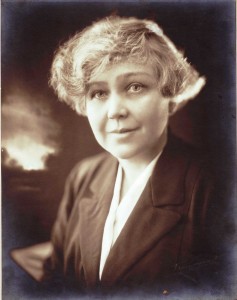 We can place in this context some interesting 1929/1930 correspondence between the Council for Scientific and Industrial Research (the forerunner of the CSIRO) and the University. The gist is that the CSIR was crying out for well trained graduates to employ in the area of the biological sciences. To encourage this, scholarships were being offered to “men” or “persons” who had demonstrated an aptitude for the area. 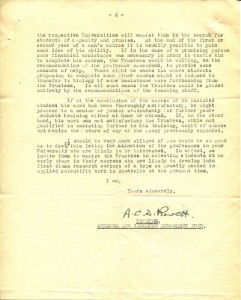 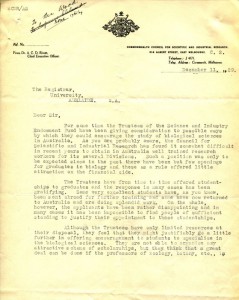 The young head of the Department of Botany, Joseph Wood, sought to clarify this ambiguity: “I should like to know definitely whether the Council desires men only as research workers or whether the proposals include women as well?….Should the latter be the case I may have recommendations to make.” 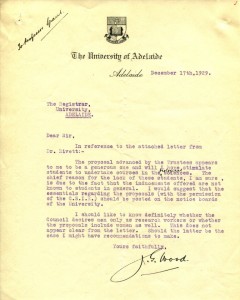 The CSIR responded to the effect that yes, the scholarships were open to women but that Wood might think twice about encouraging women to apply as there was little chance they would be hired at the end of their studies: 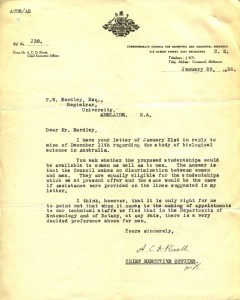 This provides something of a window on attitudes to women and work during the inter-War period. “[T]here is a very decided preference for men” is something that could be said unapologetically, a plain statement of fact. The door had been opened slightly to women with increased educational opportunities and labour shortages, but it remained the case that only the most exceptional and tenacious, or those lucky enough to find an enlightened employer, could hope to be granted entry to the professional workforce on anything like equal terms with men.

Judging by the above and his record of appointing women to lectureships and research positions during his tenure as Professor of Botany (1935-1959), Joseph Wood was on the more progressive end of the spectrum when it came to gender equality.  It’s a small example but indicative of a tradition of supporting the aspirations of capable women to be given a fair go in the education system and the job market.

Looking forward a century the equally bright and determined Julia Gillard cut a swath through student politics and in doing so embarked on a political journey that would three decades later see her assume the Prime Ministership. Many would argue – not least Gillard herself – that as a society we still have some way to go before the barriers to women’s full participation in the workforce and public sphere are dismantled. Nonetheless, the University of Adelaide can be proud of its long standing efforts to promote the legitimate desire of women operate on a truly level playing field.