Research is for many the cornerstone of the University of Adelaide. The Environment Institute, Robinson Institute and Institute for Photonics and Advanced Sensing are several of the University’s cross-disciplinary centres involved in world-leading research. Fittingly, the last of these is to be housed in a new building recently christened “The Braggs” in honour of the contribution of two of the greatest researchers to be associated with the University, Nobel Prize winners William and Lawrence Bragg.

'The Braggs' building, University of Adelaide.

A little over a century ago William Bragg was responsible for some of the most significant research to have emerged from the University of Adelaide, specifically his enquiries into radioactivity and the nature of alpha rays/particles. 1904 is considered by Bragg scholars to be a key year in the scientist’s career – the year that he began the research that would lead to his nomination for fellowship of the prestigious Royal Society of London and eventually a Nobel Prize. As physicist and historian S.G. Tomlin put it in his Australian Dictionary of Biography entry on William Bragg:

The turning-point in Bragg’s career came in 1904 when he gave the presidential address to section A of the Australasian Association for the Advancement of Science at Dunedin, New Zealand, ‘On some recent advances in the theory of the ionization of gases’. He discussed the penetration of matter by α and β particles, concluding that the massive α particles, unlike the β and γ rays, would move undeviated through a gas until all the energy was lost through ionization of the gas molecules, and consequently α particles of a given initial energy should have a definite range in the gas. This idea was followed up in a brilliant series of researches which within three years earned him a fellowship of the Royal Society of London.

A prerequisite for the Bragg’s innovative research was the acquisition of a quantity of radioactive material. Radium had only recently been discovered and there was certainly no known source of it in Australia. In fact the only source at the time was an outpost of the Austrian Empire where it was produced from the uranium ore by-product of silver mining.

In order to obtain sufficient radium for his testing he sent this December 1903 message to a Cambridge based supplier of scientific apparatus (click on image to enlarge): 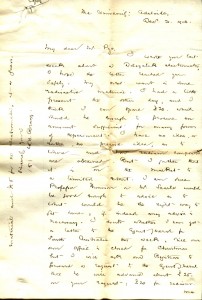 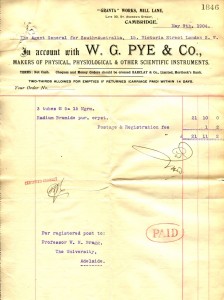 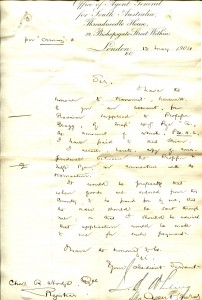 Bragg took delivery of his supply of the rare element in June 1904. These days it seems incredible that radium would be shipped across the world in such a casual fashion. At the time, however, radium was simply a scientific curiosity with little being known about its potential dangers, much less it’s application in the production of energy or weapons.

Having obtained the key experimental raw material he and his assistant Richard Kleeman embarked on a number of historic investigations, the results of which were written up over the following months and years in several locally and internationally published papers. More detailed accounts of the scientific significance of Bragg’s work during this period can be found in S.G. Tomlin’s Physics and Physicists in the University of Adelaide, and John Jenkin’s William and Lawrence Bragg, father and son: the most extraordinary collaboration in science.

Bragg’s consolidated findings were published as Studies in Radioactivity (1912) which has been digitised as part of a joint University of Adelaide Archives & Barr Smith Library Special Collections online exhibition on Bragg. A tribute to one of the University of Adelaide’s pioneering researchers, the exhibition also makes available photographs, news cuttings, correspondence, out of print biographical material, and series of recorded lectures from later in Bragg’s career.