The University of Adelaide Archives recently learned that a collection of the University’s oldest records has been accepted for inscription on the United Nations Education, Scientific and Cultural Organisation’s Australian Memory of the World Register. The Register represents a selective list of Australia’s most significant documentary heritage and we’re honoured to be included alongside records such as The Endeavour Journal of James Cook, Australia’s Sorry Books, and the PANDORA web archive. 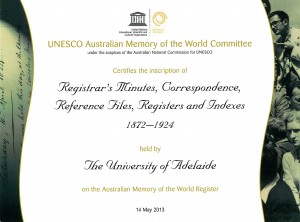 The case for inclusion was made not only on the basis of the completeness of the collection, which spans the first half century of the University’s existence, but also on what the records reveal about late 19th/early 20th century South Australian culture and society.

In addition to constituting the historical raw materials of the inception and evolution of the institution itself, the material sheds light on notable aspects of South Australian history such as  liberal, reformist impulses that saw the democratisation of access to education, for women in particular. The records also provide evidence of the philanthropic gestures of influential figures within Adelaide society, the development of musical and technical education, student activities and the impact of war, the evolution of pedagogical theory and practice, and a number of notable staff and graduates. 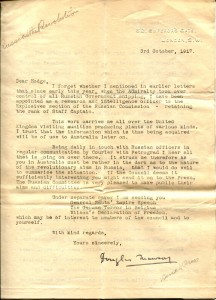 At the Archives we’re keen to make the University’s historic records as accessible as possible to researchers. As part of this process some of our volunteers have been undertaking the transcription and digitisation of Series 169 (Registrar’s Department Correspondence,1872-1923), the initial stages of which can be found here.

All research enquiries can be directed to the Reference Archivist on (08) 8313 3407,  or by email: archives@adelaide.edu.au.

This entry was posted in Ceremonies / celebrations, Community engagement, Prizes / awards / scholarships and tagged Memory of the World, UNESCO. Bookmark the permalink.