Breakthrough in salt-tolerance in plants research 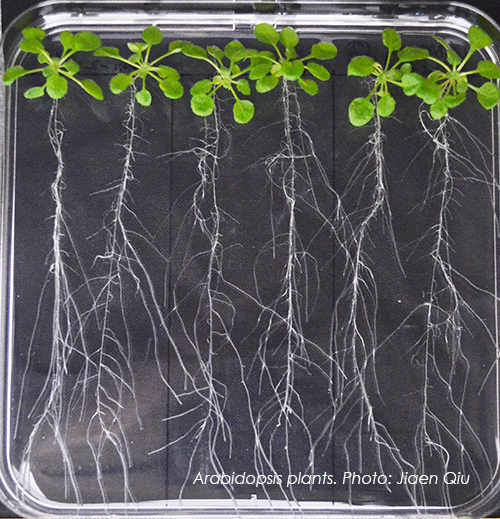 University of Adelaide researchers have made a breakthrough in investigating salt tolerance in plants which could lead to new salt tolerant varieties of crops, and also answer unresolved questions in plant biology.

The researchers, also from the ARC Centre of Excellence in Plant Energy Biology here at Waite and in collaboration with the University’s School of Medicine, have discovered that a protein known to control salt balance in animals works the same way in plants.

The research, published in the journal Plant Cell and Environment, found that in plants, as in animals, a group of proteins, a type of ‘aquaporin’, can transport salt ions as well as water.

Aquaporins have long been known to act as pores by transporting water across membranes in plants and animals, and they play critical roles in controlling the water content of cells. But, until now, it was not known they could do the same with sodium ions (salt).

“In animals, aquaporins are extremely important in water filtration in the kidney,” says project leader Professor Steve Tyerman. “In plants they can do the same thing – filter the water that goes through the plant. But under certain conditions some aquaporins can also let sodium ions through.

“This may explain a lot of unsolved problems in plant biology, for instance how salt gets into the plants in the first place.”

The researchers believe these “double-barrelled” aquaporins may be the elusive proteins that let sodium ions─the toxic component of salt─in and out of plant roots. Since the early 1990s researchers have known that salt enters plant roots in saline conditions via pores in the membrane, but the identity of these pores has remained a mystery. This particular aquaporin is abundant on the surface of roots.

“We discovered that it has characteristics similar to the properties previously identified for the pores responsible for sodium ion transport,” says co-lead author Dr Caitlin Byrt, Postdoctoral Fellow in the School of Agriculture, Food and Wine. “This finding opens new possibilities for modifying how plants respond to high salt and low water conditions.”

The researchers say that this discovery will help them target ways of blocking the pathway of salt into plants. And plant breeders may be able to select varieties which have differences in the aquaporin protein.

There are also exciting implications for understanding how plants function. The discovery will help plant scientists dissect the role these “double barreled” aquaporins play in how roots respond to osmotic shock and salt stress, how long distance water transport in plants occurs, and how leaves control the entry of carbon dioxide for photosynthesis.

This entry was posted in News, School of Agriculture, Food & Wine. Bookmark the permalink.